REVIEW and GIVEAWAY: Heart of a Dove by Abbie Williams 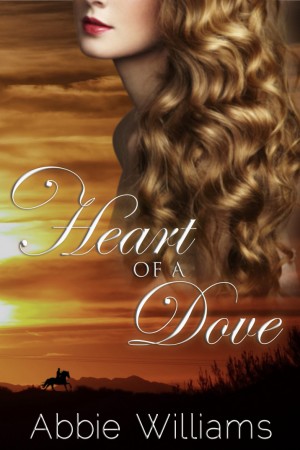 Set in post Civil War America, the story follows Lorie Blake, a southern orphan sold into prostitution at fifteen. Two years have passed, leaving her with little hope of anything more. Meanwhile, three longtime friends and a boy with a heart of gold are traveling northward, planning to rebuild their lives in the north and leave behind the horrors of their time as soldiers in the Confederate Army.

Fate, however, has plans of its own, causing their lives to collide in a river town whorehouse. Forced to flee, Lorie escapes and joins them on the journey north. But danger stalks them all in the form of a vindictive whorehouse madam and an ex-Union soldier, insane and bent on exacting revenge. At last, Lorie must come to terms with her past and devastating secrets that she cannot yet bear to reveal.

Heart of a Dove is the first book in a gripping, sweeping romantic saga of pain, unbearable choices, loss and true love set against the backdrop of a scarred, post-Civil War America.

The blurb for this book caught my attention but it was the excerpt that sold me on wanting to try it. It’s nitty gritty, dark and pulls no punches. Lorie is forced into a life she could never have imagined before the war and before long, more emotional scars join those she already has from the loss of her entire family. But wounded as she is, Lorie is a fighter and I wanted to see how she would deal with her new life and move forward from there.

There is no easy save for Lorie, no last minute “you don’t have to become a whore after all.” She spends almost three years there and works almost every night of them. This plot line says a lot about the horrible fate of women in this era who had no family or husband to provide for them and the limited choices they faced to keep body and soul together. Lorie’s descriptions of her life in the whorehouse are enough to show how awful it is for the women without being blatant about it. I can see it deadening her over the three years and how she’d turn into the hardened eyed veteran given too much longer.

The sex is not made to seem gratuitous. It’s supposed to be something the women endure, deal with, put up with – something that can become soul destroying in time. There’s nothing titillating about it and thank you for that. The first part of the book is also about the women, their lives in the cathouse, how their relationships, good and bad, are among themselves. How they view men as the outsiders who come into this world for only the evenings and nights then are gone.

The first 1/3 of the novel shows Lorie deadened to her life, existing and becoming harder though a fellow whore’s friendship kept her more sane and feeling with her heart not completely dead yet.

When Lorie breaks free, suddenly she’s back in the outside, among men in differing circumstances and it takes her a while to readjust to it, to being treated with common courtesy and respect. It’s her luck to be discovered at the whorehouse by someone who knew her father during the war and who is determined to get her away from there. Her luck quadruples due to the fact that the other men with her savior are as gentlemanly as is Gus. They know her past yet still treat her gently and as a lady. A bit unrealistic for all four to have hearts of gold? Maybe but I enjoyed getting to know all four of them and the pleasure they took in spoiling Lorie as they would have loved to have spoiled a sister or young woman from home.

The spoken dialog is slightly more old fashioned in feel but not stilted or anything that would put me off reading it. It reads like a 19th century letter might and I was put in mind of the period literature used so effectively in Ken Burns’ “Civil War.”

Now comes the middle 2/3 of the story which is like a dreamy passage of time during the trip across the prairie. There is a lot of remembering of the good times in their lives before the war. The story telling hearkens to age when spoken words mattered more and reminiscing would be a way to recall past times and good memories as well as magical scenes such as the evening of fireflies and dancing.

But the literary “gun” shown to us in the first section appears again. It’s a threat that links with Lorie’s past life and hints of troubles to come. A brief reminder that danger lurks, which Lorie knows even if the men refuse to believe it and think it past.

I adore the character of Malcolm with his teasing and jokes. Together, he and Lorie sound much as she wants him to be, a beloved younger brother who has been doted on all his life. Malcolm’s older brother, Boyd, is also more than willing to adopt Lorie as the sister they’d never had before. We see Lorie come back to life as she fondly remembers bittersweet past family life and enjoys her new “family.” They are the last of their families and really are bonding together into what they tell the Spicer family. This section just feels like a lazy summer day that won’t end and is filled with lovely descriptions such as the storm that blows up as they cross Missouri with “lightning that dances on crooked legs.”

The last third of the book however seems to drag. Perhaps it was my dread of the return and firing of the “gun” from the first Act and who would suffer as a consequence but I put the book down in order to read a lighter, more comedic one before heading back to finish this one. I also felt that the growing romance between Lorie and Sawyer was filled with way too much mental lusting even if that lusting wasn’t nearly as graphic as I’ve read in far too many books. It’s more yearning and gazing and wanting but there’s a lot of it.

I’m also not partial to love triangles and while it’s not really a true love triangle, the way it’s started up here and then carried on during the journey, is kind of creepy. It told me that someone was going to get hurt, at least emotionally if not physically. Since I truly liked all the characters in this group, it was another reason, besides the retribution I knew was coming, that made me reluctant to read this part.

When the love triangle takes its toll and the danger finally does appear, they’re both as bad as I feared. First feelings are hurt and emotions are devastated then violence erupts with vicious swiftness. Thank you for giving Lorie the strength and will to fight back and inflict as much pain as she knew would be aimed at her. Even if rescue hadn’t appeared in the nick of time, she wasn’t going down without a fight.

There is a lot I liked about this book. It didn’t pull punches, it feels period, it was filled with memorable characters and at times lovely descriptions and language. Even though there is a sequel coming, this book feels complete. There was just way to much longing and longing and more longing that made me feel every last one of the miles the group traveled. B-