When I first started the Lucky Harbor series, I wasn’t sure I would like it. I have a visceral aversion to books with cute titles set in cutely named small towns, with covers colored in pastels and adorned with cute dogs or food. But my strong appreciation for your Sierra Nevada-set series pushed me past my initial resistance, and once I started the trilogy of Phoebe Traeger’s estranged daughters, I was just a little bit hooked. There is a basic affability to your books I cannot precisely articulate, and it often sweeps me along past issues I see more clearly in retrospect. Head Over Heels, the third book in the series, is probably my favorite, affably flawed as it is. 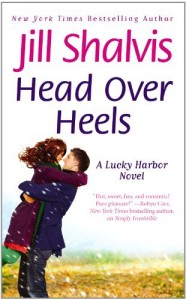 Chloe Traeger has always been the wild child of the sisters, more like her mother in her unwillingness to settle in one place and follow what she perceives to be society’s conventions regarding marriage and family.  She was working with her two sisters, Maddie and Tara, to restore and run the B&B their mother had left them, but only as long as she could light out periodically on her own. These days, she was traveling to demonstrate and distribute her own line of natural spa products, which was already a small nod to stability, but the travel still nourished Chloe’s somewhat restless soul, especially when the alternative was getting into trouble with local law enforcement for helping her friend Lance “rescue” some abused dogs.

Of course, local law enforcement represented more than legal trouble for Chloe; if she let him, Sawyer Thompson could put her into far more danger than Lance’s latest scheme — danger to her body, mind, and heart. Reformed bad boy turned sheriff, Sawyer has watched his two best friends, Jax and Ford, fall under the spell of Chloe’s sisters, and he knows he is a very short step away from the same fate with Chloe. The hell she could raise around town with Lance was nothing compared to the havoc she wreaked with his internal sense of order and control, and the worst thing was that Sawyer couldn’t make himself stay away from her:

[Chloe] wore a soft, black hoodie sweater that clung to her breasts and dark, hip-hugging jeans tucked into high-heeled boots that gave off a don’t-fuck-with-me air but made him ache to do just that.  There was a wildness to her tonight, hell every night, and an inner darkness that he was drawn to in spite of himself.

It called to his true inner nature, the matching wildness and darkness within him, which he’d tried to bury a long time ago.

As reluctant as Sawyer is to revisit that darkness, Chloe has an even more basic concern about getting involved with Sawyer. She has acute asthma, which makes all types of physical exertion, especially the good kind (and would there be any other kind with a guy like Sawyer?), uncomfortable at best and life-imperiling at worst. So powerful as their attraction and friction-producing flirting is, it’s not until Sawyer’s undercover work for the DEA brings him into conflict with one of the town’s real bad boys – who happens to have a growing interest in Chloe – that things really heat up between them.

Anyone who has read the first two books in this series has seen the smart-aleck flirtation between Chloe and Sawyer intensify over the year or so those books cover, and one of the things I appreciated about Head Over Heels was the way it continued to build on that dynamic rather than radically alter it for dramatic effect. And Chloe’s asthma is a very interesting issue in the relationship, because it forces both Chloe and Sawyer past the somewhat clichéd internal obstacles they have to cope with, as well. Sawyer, for example, has unresolved issues with his father, a man who cannot seem to see Sawyer as anything but the troublemaking teen he used to be, and Chloe pushes him to that fine psychological line dividing past from present. And Chloe struggles with her need to feel unimpeded by a “traditional life”:

She understood that, from the outside looking in, it might seem like she had a secret death wish, but she didn’t.  It was just that when she was in the midst of an asthma attack, she often felt so close to death that she, well, dared it.  But she just wanted to run or dance or laugh hard, or have sex without needing an inhaler and possibly an ambulance.

Not exactly a common problem, but one that often left her straddling a fine line between socially acceptable behavior and the wild yearnings her mother had always encouraged.  Her sisters wanted her to stop pushing those boundaries and settle down a little.  And it was that which bothered Chloe more than anything.  The message was simple: if she wanted to be accepted, even loved, by those she’d come to care about, she’d need to change.  But dammit, she wanted to be accepted just as she was, imperfections and all.

Sawyer and Chloe’s mutual need for acceptance is somewhat standard Romance fare, but the addition of Chloe’s asthma creates an opportunity for more emotional intimacy between them. The asthma becomes a means through which Sawyer can show true care and concern for Chloe, and it allows Chloe to become vulnerable with Sawyer in ways she might not otherwise allow. The book does not treat the condition as a gimmick, nor does it become an all-consuming issue for the couple.

I’m sure there will be many, many readers who adore the way Shalvis resolves the conflicts between Sawyer and Chloe. I have a number of quibbles with the book (the “sayings” introducing every chapter seem gimmicky now, and the tendency to use humor to deflect seriousness can feel diminishing), but my most substantial issue is with the way Chloe’s struggle between settling down and setting out is resolved. Without giving away a spoiler, I will say that for me Chloe’s free spirited nature was somewhat betrayed by the resolution, and the reason this matters for me is that so much of the book – of the series, in fact – is constructed around the character of Chloe as a woman who truly enjoyed her freedom and was not just running from something. And while I could lay out the logic of the movements made in the book, I still find them a problematic compromise, and one that highlights the theme of “settling” the series repeats as a chorus.

Throughout the series there is an attempt to distinguish settling down under the right circumstances from just plain settling. One difficulty, of course, is that Romance tends to favor traditional or conventional endings, so an untraditional heroine is already at risk of being made somewhat traditional in the end. The Lucky Harbor series seems especially fond of wrapping things up rather neatly for its main characters, and in Chloe’s case I think the neat wrap-up sells Chloe (and Sawyer) a bit short. And while not a deal breaker for me, it was a disappointment, despite my overall enjoyment of the book and the series. B-