REVIEW: Hazard and Somerset: Off Duty by Gregory Ashe

The following review contains spoilers for some of the books in Gregory Ashe’s Hazard and Somerset gay mysteries. If you are interested in reading the book and want to avoid spoilers, avoid this page and visit my review of book one, Pretty Pretty Boys.

This is a collection of three novellas and a handful of vignettes that take place between books in the Hazard and Somerset mystery series. Although the books in the series are of varying quality, I got obsessed with the romantic relationship the series centers around so I wanted to read this 131-page collection.

Tickets to the Gun Show

This short story, about 25 kindle pages in length, takes place between Paternity Case (book #3) and Guilt by Association (book #4). 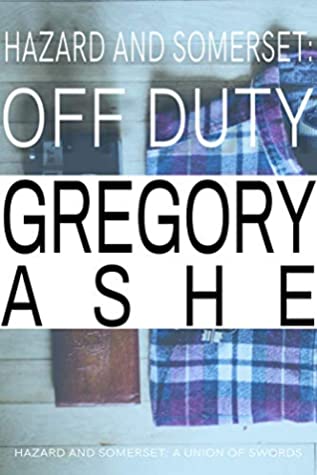 There are a few threads here. Hazard is at the Pretty Pretty (Wahredua’s only gay bar) when he observes three men spray painting the gay club’s exterior with homophobic slurs. Hazard and his boyfriend, Nico, are on the outs and Somers is trying to help Hazard get Nico back. Somers left concert tickets in his desk for a concert he and his somewhat estranged wife Cora plan to attend, and he asks Hazard to pick them up for him, but it turns out the tickets are missing and Hazard has to figure out who took them and then get them back.

This story was just not bad. There was not much mystery here; it only takes Hazard a few pages to work out the identity of the thief. The rest of it is about the lengths Hazard will go to get the tickets to Somers and there’s some action involved in that and a bit that shows how Somers tries to get Nico and Hazard back in each other’s good graces.

The focus here is almost all on Hazard alone. He is generally somber and angry (God knows he has good reasons to be) so I like him better in his interactions with the laid-back, teasing Somers. Their partnership is a delight partly because it brings out Hazard’s romantic nature and leavens his brooding with humor. I missed that here.

Additionally, Hazard breaks some rules in this story; he’s become more ruthless by this point in the series and I liked it better when he wasn’t such a vigilante. C.

When the Road Rises Up

This novelette, approximately 48 kindle pages long, takes place between Guilt by Association (book #4) and Reasonable Doubt (book #5). Hazard and Somerset are now in a romantic relationship and are on vacation as a couple for the first time, at a bed-and-breakfast in a remote area, when Hazard hears a baby crying out. The next morning at breakfast, he notices that none of the other people staying at the B&B have a baby with them. Hazard and Somerset explore the B&B in search of the child and discover an unused section of the building as well as notice suspicious behavior by the innkeeper.

This one was a lot more enjoyable than the previous story. There was an actual mystery here with a fair bit of sleuthing and even a small subplot about an elderly guest. I loved seeing Hazard and Somerset happy and in love. I wish I had read this one in the correct chronological order, between Guilt by Association and Reasonable Doubt, because I wanted more of a honeymoon for our couple before the hard, gritty stuff that comes up in Reasonable Doubt hit them. This short mystery provides that.

There were some weak motivations, though. At first it wasn’t clear why Hazard and Somers turned their attention to the baby Hazard had heard instead of relaxing and enjoying their vacation—it would have been more natural to dismiss it when there was no hint of foul play. Once they learned more their search for the truth made more sense. Additionally, we never learned the villain’s exact motive and I would have liked to know it. B-.

This is another roughly-25-page story. This one takes place between Reasonable Doubt (book #5) and Criminal Past (book #6) and it bears some resemblance to Tickets to the Gun Show. In that story, Hazard went to great lengths to get Somers concert tickets. In this one, Somers goes far to get Hazard’s favorite author to sign books for him. Despite the similarities I liked this one much better.

After the events of Reasonable Doubt Hazard is injured and whether he’ll regain the use of his left arm is still an open question. Hazard thinks physical therapy is useless but Somers, ignoring Hazard’s protests that he has something more important to do with his day, drives him to PT anyway.

Somers knows what Hazard’s important thing is—getting his set of children’s books signed by author Roseland Weeks. Somers determines to do this for Hazard but before he can, the elderly author is kidnapped. Somers must help her daughter recover the author and her daughter requests that he do it without reporting the kidnapping to the police.

There’s no mystery here at all; we know who the kidnapper is right off the bat. But there is an action sequence and we see Somers taking risks to get Hazard’s books signed. This story was delightful because it hits on how much Somers loves Hazard and how he feels he can never repay Hazard for saving Somers’s daughter, Evie, potentially at the expense of the use of his arm.

It may be partly because I read this story in the correct chronological order, after Reasonable Doubt and before Criminal Past—indeed, I’m sure that was a factor—but I loved the dynamic between the guys here. I loved the devotion, the love, the snark. All of it. It showed how important Hazard is to Somers and that Hazard too understands his partner and cares.

In addition, I appreciated that for once it was Somers who got injured and not Hazard.

The rest of the anthology is comprised of six short vignettes that take place after Criminal Past (book #6) and reading them was like being hugged after a trauma. Criminal Past is one of my least favorite books in the series, with overwrought angst, gratuitous violence and an almost relentlessly dark second half. To see the guys being sweet and teasing and in love after that felt medicinal.

Now on to the vignettes. All of them take place after Criminal Past (book $6). I can’t say much more than one or two sentences about each vignette because they are so short that more than that would spoil them. Most don’t stand on their own but I still liked them.

Vignette I involves Hazard shopping for face wash while Somers teases him. I read this right after Criminal Past and I just wanted something to go Hazard’s way so I didn’t enjoy it that much. C+.

Vignette II takes place at the Pretty Pretty, Wharedua’s one gay club. Somers wants to dance and Hazard thinks it’s a bad idea. A little hot but a little frustrating because reasons. C+/B-.

In Vignette III Hazard just wants to watch a documentary, but Somers has other ideas. I can’t say more besides that it was cute. B-.

Vignette IV involves a visit from a new neighbor that doesn’t go well. C+ but mainly because it had more angst than I expected or wanted.

In Vignette V Somers is trying to get his two-year-old, Evie, to eat roasted broccoli and chicken and Evie wants none of it. This was my favorite and really sweet. B.

Vignette VI happens when an exhausted Hazard is driving home with a new bed. Just about everything that can go wrong goes wrong, except in his relationship with Somers. B-/B.

Overall, I’d give this book a B-. I recommend reading these stories and the novels in the correct chronology if possible. I got more out of the ones I did that with.