I thought I was destined to escape the quaint town of Destiny, Ohio, the setting for for your contemporary romance series. I disliked the last three entries which had lost the flair of the first two, One Reckless Summer and Sugar Creek. I hadn’t planned to read the most recent Destiny novel, Half Moon Hill, but a glowing review at another site made me change my mind. I’m not sorry I did. Half Moon Hill isn’t as strong as the Destiny novels I like, but nor is it as bland and annoying as the three that precede it. 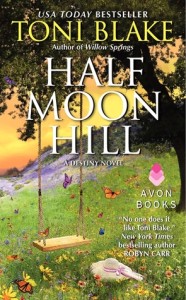 One reason I like Half Moon Hill is that there’s not a lot of Destiny in it. The majority of the story takes place outside of town, in an old mansion Anna Romo is fixing up with the hope of turning it into Destiny’s first bed and breakfast. I’ll acknowledge that, with the exception of Anne Calhoun’s Walker Hill (the town in which her latest two books are set, the first of which, Unforgiven, I’ll review later this month), I’ve had it with fictional tiny towns. Destiny, with its (sadly) unbelievably successful small town bookstore (Under the Covers), easily adopted felines, and wishfully accommodating populace makes me long for unpleasant hipsters in Brooklyn. I was thrilled that in Half Moon Hill Anna and her love interest, Duke Dawson, are living fairly Destiny-free.

Anna, portrayed as a man-stealing witch in the last book, Willow Springs, is trying to make a home for herself in Destiny. Anna has a tragic past. She was kidnapped at age five by a woman who claimed to be her mother and just recently found out she is really the long-lost daughter of Destiny’s Romo family. Last year, Anna returned to Destiny and began to make a life for herself. The Romo brothers–both of whom have been the heroes of Destiny books–are very protective and Anna, in an effort to make some space for herself, bought an old Victorian on Half Moon Hill, several miles out-of-town. When this novel begins, Anna has redone the interior of the house, pretty much on her own, and is now struggling to renovate the exterior. One morning, on a trek through the nearby woods to collect berries for a possible pie-making, she runs into a man who, at first seems to her to be a step or two above Sasquatch.

Over six feet in height and bulging with muscles that gave her the impression he could tear her limb from limb, he emerged through a patch of tall shrubbery, flashing crazy, piercing blue-gray eyes. Unkempt brown hair hung to his shoulders and a scraggly beard covered the bottom half of his face, not quite obscuring the angry scar that slashed its way down one cheek.

In her hurry to escape from this barbarian, she twists her ankle badly enough that she can’t walk. Since she can’t immediately run away, she finds herself warily conversing with the guy and–because this is a small town–he turns out to be someone she knows. He’s Duke Dawson, the biker best-friend of her brother Lucky. Several months ago, Duke was in a horrible accident and was rumored to have left Destiny and moved to Indiana. This scuttlebutt is false, however. In reality, Duke has returned and, unbeknownst to all of Destiny, is living in a run-down cabin on Anna’s property. Duke is avoiding humanity. Not only does he struggle with the accident and his role in it, the crash left him scarred and sure his love life is over. Nevertheless, he tends to Anna’s sprained ankle and she and he forge a relationship.

Anna needs help–that her over-protective brothers don’t know about (they’d just butt in)–remodeling the exterior of her home. Duke needs a life. After a few days of watching each other bang nails in the summer heat, the two end up having hot sex and agreeing to have a no-harm, no foul relationship. Duke isn’t ready to re-enter Destiny society and Anna doesn’t want anyone to know she’s banging a biker with a bad reputation. They tell no one of their increasingly intertwined life together and tell themselves they can walk away with ease.

Anna and Duke are a passionate pair. They have a lot of well-written sex and they understand that sex binds them. I liked that, rather than immediately use sex as a way to distance themselves from one another, both Anna and Duke give thought to whether the chemistry they share means something.

But suddenly Duke couldn’t quite remember what he used to think about before Anna had come tripping her way into his little world in the woods here. What had filled his head then?

He thought back and found the answers. Mostly bad stuff. Anger. Painful memories. Helplessness. Emptiness. And he’d calmed himself by trying his damnedest to focus on anything else. Birds in the trees. Fishing. The smell of honeysuckle. One day he’d even taken a honeysuckle blossom and popped the liquid inside into his mouth the way his grandmother had taught him when he was little, the sweet-tasting burst on his tongue taking him back to a time and place when he’d felt loved, and safe. But it had only been a moment. One moment in time in the midst of what otherwise was mostly dark, black, ugly.

Until Anna had come along and filled his head with something better. Even when he’d been annoyed by her, she’d been a hell of a lot more pleasant to think about than other things. But maybe he could only admit that to himself now that some time had passed.

He thought about what to do now that it was dark out. He’d mostly found it easy to go to bed early here, and to rise with the sun—but he wasn’t sleepy yet.

And the truth was—he knew what he wanted to do. What he was itching to do.

The truth was—every time he’d seen her since they’d had sex on her couch and then again in her bed, it had been all he could do not to grab her and kiss her and hope it would happen again.

But he hadn’t. For all the reasons he’d just thought through. She was his best friend’s sister. He didn’t need this kind of complication in his life, especially right now. And even if she’d seemed totally into him when they were doing it—hell, she’d even started it—he still wasn’t sure what that meant, what she saw in him, or how she viewed him. And frankly, he still wasn’t sure he wanted to find out. He knew he was no good for her, not in any way that went beyond sex—surely she knew it, too.

So given all those good reasons for him to just head back to the cabin and call it a day, it was beyond his understanding when his feet began to lead him through the woods toward the big Victorian house.

Their relationship develops slowly and realistically. I bought both their attraction and the ways they struggled to change their lives to accommodate each other. Over the course of the novel, both Anna and Duke work to move past their limiting pasts and Ms. Blake does a nice job of showcasing their journeys. Their love story in Half Moon Hill is a nice one and I enjoyed reading about it.

There is a secondary story, revealed through an old diary, I liked as well although it mirrored, more than I would have liked, a similar “set in the past” story in Ms. Blake’s Sugar Creek. In Half Moon Hill, the story is a class-based heartbreaker, set in 1959. Anna avidly reads the diary of Cathy, the young woman whose family owned the mansion, and Robert, the hired hand who lived in what is now Duke’s cabin. Cathy’s diary, with its sad story of love denied, offers a nice counterpoint to Anna’s fears about how Destiny will judge her relationship with Duke. Ms. Blake takes a lovely risk in the way she resolves Cathy’s story and the novel is better because of it.

The novel’s weakest point is when Destiny arrives. Honestly, even the characters I once liked, irritated me here. The group of women who’ve been featured in the other Destiny books, all now happily paired, have new reasons to carp at each other. Unplanned pregnancy, infertility, and overly high wedding expectations have these women at odds with one another. I briefly appreciated the infertility plot until it, like all the quarrels, was simplistically resolved. There’s no escaping it: Destiny turns its inhabitants tedious. I wish them well and hope never to encounter them and their inevitable progeny again.

One other thing about the novel grated. The secondary relationship is set in 1959 when racial tensions across the country were rife. The language used to describe the social impossibility of Cathy’s and Robert’s relationship read as though more than cultural heritage separated the two. Perhaps it is my exposure to stories of that time–I majored in 20th century American history–but I felt as though the barriers to Cathy’s and Robert’s happiness were overstated.

Despite its flaws, Half Moon Hill is a pleasant read. Furthermore, it seems I’m not the only one ready to leave Destiny behind. On Ms. Blake’s website, she writes that her next novel, though featuring an ex-Destinyite, is set in “the sleepy Florida town of Coral Cove.” I’ll give it a try. Ms. Blake is an engaging reader and, outside the limits of Destiny, I’ve hope she’ll draw me in.

Half Moon Hill gets a B- from me.