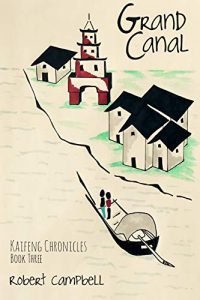 Li Bing travels from Hangzhou to Beijing along the Grand Canal, planning to stop at Kaifeng along the way. Meanwhile, developments in his new wife’s family take some interesting twists. Unforeseen circumstances have a way of derailing even the best plans.

Book three in the Kaifeng Chronicles leads us to young Li Bing beginning his journey to the capital to sit for yet more Imperial exams. He leaves behind his young and pregnant wife as well as a family investigating the scandal that came to light in book two. Really the amount of governmental paperwork in the Ming dynasty sounds staggering. But he also hopes to fit in a stop to the city of Kaifeng where he’s recently learned from his grandfather, their ancestors initially settled in China. More revelations about his wife’s family will be revealed as well as an (over) abundance of information about historical Chinese rivers and canals.

I’m still caught up in this unfolding story about the Li family, the challenging exams that Bing must pass (more by writing beautifully and crafting what is expected rather than if it is actually right or not) to maintain the honor of the family, and how his young bride Xiaoyun is settling into her new family. All the household is praying that the child she carries is a boy – something that neither her mother nor the concubine her father acquired was able to provide in her father’s home.

There’s a lovely relationship developing between Xiaoyun and her new grandfather-in-law as they discuss gardening as well as the family heritage. As she practices the writing of her husband’s ancestors, she finds the perfect addition to the badges of honor she’s embroidering for the hopeful governmental advances Bing will achieve should he do well on his exams. I’m not sure if how or what happens to Bing on his journey will figure in the next novella but I’ve already bought it to find out. B-

→ Jayne
Previous article: REVIEW: The Witness for the Dead by Katherine Addison
Next Post: REVIEW: The Orphan Pearl by Erin Satie