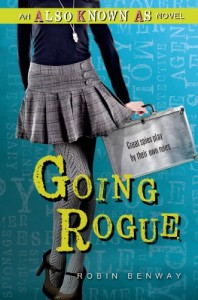 Your previous novel, Also Known As, was one of my favorite novels last year. I was charmed by prodigy safecracker Maggie and her family of spies. In that novel, Maggie and her parents are sent to New York to stop a journalist from exposing the secrets of the organization they work for. To do so, she had to get close to the journalist’s son, inadvertantly falling in love with him — and the idea of a normal life — along the way. I thought Also Known As stood well as a standalone and didn’t need any sequels but unlike many other cases, I was delighted when I discovered there was another book about Maggie and her friends.

It’s been a year since the events of Also Known As. Senior year is rapidly approaching, which means college applications and graduation. Or it would, if you were a normal high school student. And while Maggie has been pretending to be just that, there’s no escaping who, and what, she truly is.

When her parents are framed for stealing some priceless coins, Maggie is determined to prove their innocence. After all, she strongly suspects her parents are merely collateral from the Collective’s anger with her. But the more she tries to keep her family safe, the more she realizes the Collective is trouble. Other agents have left, driven away by circumstances similar to the one now plaguing her parents. There are rumors of agents who’ve gone bad. Worse yet, Maggie learns a painful lesson: sometimes you can’t keep your professional life and your personal one separate.

This is a difficult novel to discuss. While reading it, I really enjoyed. I couldn’t turn the pages fast enough. It sucked me in and kept me engaged. But now that I’ve spent some time away from the book, I can see that it has one very noticeable flaw.

Don’t get me wrong. I like these plotlines. They’re all interesting areas that I’d like to see explored. But to do so well, there need more space. Going Rogue is just a little too short to do them all justice. But by trying to include all of them in the novel, they all get short-changed. I’m still not sure I completely understand what Dominic was trying to do.

On the other hand, I liked that Going Rogue addressed the “I just want to be normal” trope that is so prevalent in many novels. Maggie comes from a family of spies. She is a genius safecracker. She loves it. But she wanted to be a normal girl who stayed in one place and got a boyfriend too. She got but a year into that life and she’s bored. When given the opportunity to return to the spy life, she jumps at the chance. Maggie’s boredom and repeated denials of being bored rang very true to me. A normal life sounds good and all but if you’re a teenager with an amazing talent and a chance at a more exciting life, wouldn’t it be more believable to jump at that opportunity?

I still love Roux and her friendship with Maggie. In many ways, my wanting to see more of that relationship is what led to my disappointment at how underdeveloped the conflict between Maggie and Roux was. Things haven’t changed. She’s still a social pariah and Maggie is her only friend. The idea of Maggie leaving is too much for her to bear so their friendship breaks and Roux starts avoiding Maggie. This is an angle that just needed more page-time.

The same can be said for the time devoted to Maggie and Jesse. Early in the novel, much is made of Jesse and the return of his mother into his life. Maggie subsequently makes a mistake that could jeopardize everything and while her error in judgment leads to trouble in their relationship, the mother is barely mentioned again. Huh?

Despite these flaws, I still really liked Going Rogue. It’s over the top and fun, and sometimes I need that. I especially recommend this to fans of Ally Carter’s Gallagher Girl series, who might be looking for something similar now that series is completed. B-

→ Jia
Previous article: Monday News: Blogging and free speech; pink is an illusion; historical romance in print; the ethics of using another author’s platform; and more on net neutrality
Next Post: REVIEW x 2: The Lotus Palace by Jeannie Lin