REVIEW: Going Out with a Bang by C.E. Kilgore 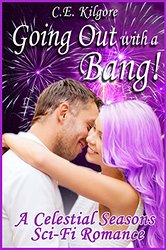 Once the captain, always the captain…Annadri’s spaceship may now be in pieces and her crew may now be a bunch of seasonal decorators, but when things get crazy, she’ll always be their captain. And things are about to get interesting.

A Vragan’s Oath is his bond… Mike made an Oath to Annadri’s husband six years ago, and it’s been a knife in his heart ever since. He loves Anna as sure as the stars shine above, but his promise and his honor stand in his way. That, and a few alien hunters.

An unexpected visitor… Kevran has traveled far across the galaxy to find his wife, Annadri, marooned on Earth. What he doesn’t expect to find is her refusal to leave. It seems their arranged marriage contract can’t stand up to the love her heart has for another. Kevran’s not sure what to make of Earth, or of this strange emotion called love.

Ah at last, the final book of this series in which the last two of the surviving five aliens who crashed landed on Earth get hitched. All the others have found true love with humans (USians actually as that’s where they landed) but Mike and Anna have loved each other from afar for years – even before they ended up in Oregon. Yet they haven’t been able to act on it due to Anna’s acquiescence to her people’s tradition of arranged marriages and Mike’s oath to her husband to keep her safe – which Mike takes to mean even from himself.

But after a few years on Earth, they’ve come to see things differently. Marriages for love, which don’t exist on Anna’s planet, have worked out beautifully for other crew members and now Anna is beginning to wonder if she and Mike might find their happiness together too. Mike’s hesitation goes beyond stubborn male and into “my oath is my life” territory. Yet, he might just finally get permission from the one being who can give it to him via an unexpected appearance from Anna’s husband. Well … okay then.

Since there are three other novellas in this series, there are a lot of people and situations to catch up with. I think newbies could start here as most every past relationship is explained but people might get bored with updates on people they have no emotional investment in. The stories have utilized some convenient alien tech to help our stranded band integrate into human life in modern day America and due to their attempts to stay below the radar, this hasn’t been egregious.

A thread from one of the past novellas does play a large part in this one as the overall arc gets completed. It’s actually kind of neat that Anna goes a bit low-tech to save the day. However even though this is Portland and authorities are used to people proudly flying whatever flag proclaims their affiliation, the police are amazing laid back about the actions they encounter in the story. Just saying.

A lot gets covered by the end of the story, both in terms of this romance and finalizing the other ones. The romance works for me partly due to the fact that Anna and Mike have been secretly in love with each other for years and starting a relationship is only foiled by Mike’s oath not to poach Anna from her husband. Once the oath is dealt with, it’s full steam ahead. I enjoyed the series, some books more than others, but overall it’s been a nice entry into SFR for me. B-