Science fiction romance is one of those subgenres I hear so much about but have never really gotten into myself. Since I’m in one of those reading kicks where I want to try everything new (to me), I figured now would be as good a time as any. So when I saw your debut on NetGalley, I decided to give it a try. 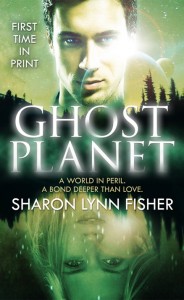 Elizabeth Cole is a psychologist who leapt at the chance to accept a post at a newly discovered planet called Ardagh 1. Sure, she might be running away from her problems — a mentally ill mother, a clingy ex-fiance — but it’s a chance for a new start, to live a life for herself instead of for other people. Unfortunately, there’s a hitch in the plan. She dies en route to Ardagh 1.

Normally, that’d be the end of our story. But you see, Ardagh 1 is a unique planet. It is populated by alien lifeforms that take the shape of the deceased loved ones of the humans who settle there. These aliens are called “ghosts” but in reality, they’re virtually indistinguishable from humans. In addition, the ghosts tether themselves to a human colonist in a sort of symbiotic relationship.

The existence of these aliens had led to the creation of Ghost Protocol: a procedure which human colonists use to handle the alien presence. The main point of the protocol? Ignore the ghosts exist. The protocol was instituted to protect the welfare of the human settlers but the increasingly unstable planet suggests that perhaps this course of action was a mistake.

Elizabeth originally came to Ardagh 1 to study the ghosts and their relationship to the settlers. Now that she is one herself, she has a vested interest in the matter. Especially when she finds herself falling in love with the human she’s tethered to: Grayson Murphy, the creator of Ghost Protocol. But as she begins to uncover the secrets of the ghosts and the planet, Elizabeth finds herself thrown into a conflict between opposing forces who want control of Ardagh 1.

Maybe this wasn’t the best introduction to SF romance. It’s a strange book. The heroine dies before the start of the book. The person we meet is in reality an alien with Elizabeth’s consciousness and personality. This leads us to all sorts of metaphysical questions of whether she really is Elizabeth or someone (or something) else entirely. What makes a soul? What makes us us? In some ways, I thought the book didn’t delve in these topics as much as they should have, considering.

I also thought the romance aspects were rather weak. Throughout the novel, I felt we were told more than shown that Elizabeth and Murphy were falling in love with each other. Elizabeth was definitely attracted to Murphy, sure, but we go from Murphy flat out ignoring her to kissing her while still seeing someone else. I guess the tether between Elizabeth and Murphy operates as the science fiction version of a soulbond so maybe that’s why I found myself unable to get into their unfolding relationship. I generally don’t like the soulbond/soulmate trope. But maybe readers who do like those storylines will like this book more.

What I did find myself more interested in was the world and the aliens. I really liked Elizabeth’s interactions with the other ghosts. I also enjoyed the exploration of the relationships between human and alien and how symbiosis and parasitism can resemble each other depending on the circumstances and perspective.

In fact, I wish we’d gotten more about the world, especially with the revelations that unfold towards the end of the novel. What is the primary motivation behind the aliens bonding to the human settlers? Is it a defense mechanism? Why would they evolve in such a manner? If no settlers ever came, what would have happened to them? I was torn between wondering if this was the start of a series about Ardagh 1 or was meant to be a standalone novel facing a brave new future at its conclusion. I’m not sure I can handle yet another series but I also wanted to see what happens next.

While I liked certain aspects of Ghost Planet, I’m not completely sure it actually is a SF romance. It just didn’t seem romantic to me. I’m very interested in hearing what other readers think. That said, people interested in some interesting worldbuilding and SFnal ideas will likely find this a worthwhile read. B-

→ Jia
Previous article: Monday News: Is Gawker the arbiter of internet justice; India selling $20 tablets to students; and the need for a Social Network Constitution
Next Post: REVIEW: Provoked by Rebecca Zannetti