REVIEW: Out of Frame by Megan Erickson

I’ve read the previous two books in this series, Trust the Focus and Focus on Me, and enjoyed them, so of course I had to pick this one up. Out of Frame moves away from the road trip conceit and onto a cruise. Hilariously enough, I went on my very first cruise a few months ago, so this was timely and made visualizing the events in the book so much easier. Sure, we see cruises all the time in movies and on TV, but it’s not the same as actually experiencing it. 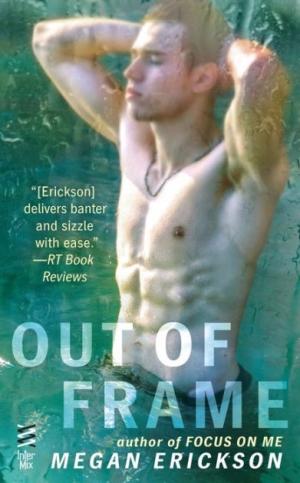 Quinn Mathers is quiet and has anxiety, which further fueled by his overprotective parents. As a result, he tends to live in the shadow of his best friend, who is the little sister of a previous romantic lead in this series. Yes, Quinn is technically the gay best friend of the straight girl, but it’s told from his POV and it is his story, not hers, so we nicely sidestep that cliché.

Quinn and his best friend go on a cruise during spring break. They’re planning to party, get drunk, and have fun. What else do college students do over their final spring break before graduation, after all? But this cruise comes with a hitch: the cast of a reality TV show will also be on-board and you know that means that cameras are sure to follow. But Quinn has a crush on J.R., who unfortunately has the reputation of being the angry black man on the reality TV show. For those of you out there who’ve watched The Real World and various other reality TV shows like it, you’ll know this is a thing.

J.R. is not who he’s made out to be on TV, but it goes beyond stereotypical expectations of race. J.R. is bisexual. However, the cast already had their queer guy, so he signed a contract saying he’d pretend to be straight. He’s managed to pull off the lie for this long and the show’s almost over. Too bad he meets Quinn.

Out of Frame holds echoes of themes from the previous books. Quinn has anxiety, which is a mental disorder. J.R. has to live in the closet. We saw the previous couples in the series have to tackle these issues, and they tackled them well. Here, the issue is that J.R. has to live in the celluloid closet, which is a real thing in Hollywood. Here, the issue is that Quinn has to overcome his insecurities to become his own person and realize that yes, he can attract and date a hot actor.

What I particularly liked about Out of Frame is that it explores the intersection of queerness and race. J.R.’s brother is sick and the money he gets from the reality TV show goes to medical treatments. It’s the reason why he’s willing to go along with the charade in the first place. That entire aspect rang very true to me. I’m not saying white families wouldn’t do this, but POC families will and do. I don’t see how this is any different from a non-white student taking a year or two off from college to go home and take care of family. (That’s why, when hiring managers look at job applications and toss out resumes from people who didn’t finish undergrad in 4 years, they’re effectively screening out a lot of POC because this is a reality for many non-white families.) I also appreciated we didn’t go the lazy, cliché route of making J.R.’s family homophobic/biphobic and instead portrayed them as being upset that he’s considering playing straight again for a new role. The scenes with J.R.’s family were just great for me overall, honestly.

On the other hand, I’m not sure Out of Frame left an impact on me as much as the previous books. I don’t know if it’s because it takes place on such a truncated timeline versus the others, but it didn’t go as deep as I wish it had. That said, I’m super excited that one of the romantic leads is a bisexual black man and I hope that we’ll see more books like this in the future. B-