REVIEW: For Your Eyes Only by Sandra Antonelli

By day, Willa is a mild-mannered scientist; by night, she’s on the trail of stolen classified documents. Technically that makes Detective John Tilbrook on her side, but Willa has secrets she can’t share…

John is instantly fascinated by the new physicist on the block, even though Willa keeps her distance. A fan of coincidence and happy endings, John has plans for the secretive scientist with the wicked sense of humour.

But Willa has more than her heart on the line — her best friend is at the top of the suspect list for espionage, she’s having trouble leading her double life, and somehow her hair just turned purple. As days speed past, Willa’s life unravels as she struggles to come to terms with her unexpected feelings for a man she just met. John’s a big fan of happily-ever-afters, but will he believe in love and happiness when Willa divulges the real reason she’s in town? Will he break the law he’s sworn to uphold — for love?

I’m afraid this is going to come off a bit like “Jekyll and Hyde” review a book. There are parts of this book I really like and some that seemed aimless to me at the time even though they eventually all tie together. The destination was worth the trip but the ride sometimes got boring. 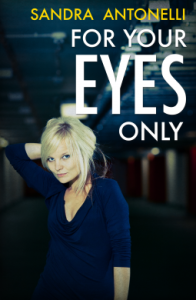 As with “Renovation,” I am delighted with the ages of these main characters. John immediately notices the fine age lines at the corners of Willa’s eyes and likes them. She’s got character and the wisdom of maturity and he’s the same way. They speak and make references that I grew up with – ABBA song lyrics, and 80s pop tunes – and they both think, as I do, that 8 year olds shouldn’t cake on eye liner and sing about their ass in their jeans. If that makes them – and me – sound like the “next stop is liver spots, incontinence, and dentures” so be it. I know these characters. They are me and I love reading about them as the hero and heroine and not as cute oldsters.

Another thing I immediately picked up on and wish there had been more of is Willa’s synesthesia. I first read about this years ago in an article in Smithsonian magazine and was enthralled. I wanted this too. To hear sound/voices in colors, for my letters and numbers to have color and feeling, to experience the world in such an unusual and fascinating way. The only other romance character I recall with it was in an old book called “Enchant Me Not” by Michele Hauf. So kudos to you for including this and for having it help Willa in her investigation. I just wish a bit more of how she sees life on a daily basis had found its way into the story.

Willa is a strong woman. She can change her own tires – well except for one stubborn lug nut – and if she needs help, she’ll ask for it, thank you. She’s a physicist too! An honest to God, works at Los Alamos, brainiac PhD. I wanted to stand up and cheer about the fact that she doesn’t turn stupid to get a man nor give up life goals. Part of this is that she’s past the age of having children and her idea of marriage and settling down is from the viewpoint of a woman approaching 50 but still, she’s smart and stays that way.

John is the starry eyed romantic of the two, the one who thinks in terms of “meet cute” and romcoms. He’s also almost endlessly understanding when Willa tells him she doesn’t have the time for a relationship. John is a man of patience who knows who he wants – Willa – and is willing to put the time into getting her. I did worry at the end when he (finally) blows a gasket and wonder if all your heroes will end up doing this. But then it becomes clear – and you have laid the ground work for this – why he should be allowed to and that what he tells Willa doesn’t mean he doesn’t still love her. As John says, these are extraordinary circumstances, ones involving the FBI, classified documents and national security. In other words, not your every day conflict. Willa does tell him some stuff about what she’s doing but not everything. I can admire that as does John once he’s learned about it.

But as I was reading the book, I couldn’t help but feel that it’s told in vignettes which might be fun to read but which often appeared random and unconnected. I’d finish a section and think, “why is that here?” Why should I care about Willa’s contentious relationship with her step-daughter, the murder investigation John’s working on, Willa’s widowhood, or the fact that several men are falling in love with Willa? Eventually it did all make sense but I think readers need to know to stick with this story.

This book also has a lot more extra-romantical stuff than did “Renovation.” The investigation is a major part instead of mere background “white noise.” Willa and John spend a lot of time “on paper” apart because of it. It also comes complete with an alphabet soup of FBI agents. The stakes here make me glad I don’t deal with this level of classified stuff. Thank you for managing to keep it straight and fairly easy to understand even if I have no clue what Willa and her colleagues actually work on when they’re doing their physicist stuff.

My feelings about how to grade the book shifted as I neared the end. I loved that John brings Willa “back to life” and gets her to laugh again. I love that Willa inspires John to be the romantic hero it seems he’s always wanted to be and shows that nice guys can finish first. The resolution of the document leaks actually seems more realistic to me than a bunch of Black Ops crap. The angst and pain that they both go through on the way to a HEA – which I agree is better than a happy ending – feels like two mature people who have lived and lost and are delighted (and a little scared) to find love again. I just wish so much of the body of the book hadn’t seemed so random while I was reading it. B-