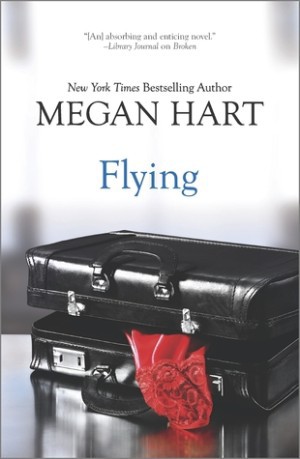 past death of a child

Forty-something Stella aggressively fought for one item in her divorce settlement: free standby flights on her CEO ex’s airline. When her son is with his dad, she goes flying — a term which doesn’t refer to the actual flights, but to her elaborately staged seductions of strangers. For these trips, Stella puts on a carefully constructed false personality along with deliberately sexy outfits, and relishes the attention she receives:

It doesn’t matter that Pete is at least her father’s age and wears a walrus mustache. Or that he’s married with kids and grandkids whose pictures he proudly displays on his phone. Or even that the gum he chews constantly can’t cover up the pervasive odor of bad breath. It doesn’t matter that she will never take Pete home and fuck him.

It only matters that she could, if she wanted to.

The impression that Stella has a perhaps pathological need to feel desired is increased when she deliberately entices a female TSA agent who can’t quite conceal an attraction to her, and then chooses to seduce an Episcopalian priest. “The moment for doing the right thing had passed, and who’s to say what’s right and wrong, anyway? He’s an adult. She isn’t forcing him.” We learn that Stella has some form of physical scarring that she forces herself not to hide, one of several hints that something terrible may lie behind Stella’s flights:

Desire had become the one true constant in her life, the only feeling she could count on never to disappoint her. Desire required nothing from her. No investment. No responsibility. All desire wanted was to be sated. It was physical, and therefore, could be killed.

I’m not quite sure how we, as readers, are intended to feel about Stella’s actions. She herself resolutely shuts out any kind of shame, but her sexual encounters — though depicted as exciting and physically satisfying — seem ultimately sad for both parties. In one particularly odd seduction, she meets sort of the male equivalent of herself — his drive is to know he’s given women pleasure, and to have them want to come back for more — with slightly disturbing results. This is erotica in its more serious form, reminding me of a line from Tiffany Resiz’s The Siren: “If it’s a subgenre of anything, it’s horror.”

In her weekday life, Stella is a working mom with a tendency towards over-protectiveness, struggling with a sullen, difficult teen. (The story is told in third person, limited omniscient narrative throughout, but switches to present tense when Stella is “flying”; it also switches during sudden flashbacks, which I didn’t find a sufficient clue to prevent confusion.) Her usual routine is disrupted by two separate incidents: she runs into Craig, a man she’d once fallen in love with while she was still married, and she finds herself going home with a man named Matthew while she’s purposefully traveling, for once — no outfit, no facade… she even inadvertently tells him her real first name. While she and Craig uncomfortably try to resolve their negative feelings and negotiate a new friendship, Stella finds herself getting into a long-distance relationship with Matthew. Meanwhile, her issues with her son are growing increasingly tense, forcing Stella to face a very painful event from her past. A story which started out as being about detachment becomes anything but detached.

Flying has a relationship dynamic similar to Hart’s recent Every Part of You serial novel: a strong, sexually aware woman trying to maintain her dignity and self-worth while in a relationship with a man who’s constantly hurting her. Matthew is happy for Stella to visit him in Chicago, but never comes to her, and he disengages from her whenever his ex-wife and kids call or come by — which is constantly. Stella feels no need to fly while she’s with him, but her needs for respect and consideration aren’t being met. (I liked that Stella’s “flights” never become an issue between them, as they certainly would have in an ordinary romance.)

One of the curious aspects of the book is that I never saw what makes Matthew special to Stella; I don’t know if it was deliberate or not, but he comes across mostly as being in the right place at the right time, a moment when Stella was vulnerable and unusually accessible. She even finds herself telling him her most painful secret, on that first night:

After that, there wasn’t much to say. She really should rouse herself, but moving would destroy this quiet that had fallen between them. Force her to acknowledge that she’d told him the most awful truth about herself, and worse, she would have to force herself to wonder, why him? Dozens of strangers. Why now?

It turns out that Matthew has a painful secret of his own, and he does help Stella with her bad memories, but probably no more than any person with some life experience under their belt could have. Their sex is intense, but not appreciably different from what we see her enjoying with other men. But when she goes flying again after meeting Matthew, she does so hoping to find him again, the man who knows “not only her real name, but the secret she never told anyone.” And when she does find him, it’s again different from other flights:

At home, if she’d dressed herself up and gone to a bar, Stella would’ve been plagued with insecurities that never bothered her when she flew. But here was the conondrum. She was dressed up; she was flying. But against all odds, she was Stella. If she’d met another man tonight, there’d have been a different name. Mannerisms, habits, whatever it was that made her into someone new. In from of him though, this man who’s already seen her naked, who’d already felt her come, who’d already tasted her, Stella had to swallow hard against the sudden tightness in her throat.

I have a weakness for well done omniscient narratives, and the prose in Flying is quietly beautiful. The plot kept me guessing; I truly had no clue how it was going to come out. Stella’s growing vulnerability and humanity made me care for her, and I can certainly recommend it as a story about coping mechanisms and moving forward after tragedy. But then it tries to pull off a romantic happy ending and I’m just not sure it works. I think I actually would have preferred an ending simply focusing on Stella’s growth as a person to a supposed HFN that left me doubtful and sad. So though the quality of the writing would earn this at least a B, the lack of some form of satisfactory closure brings it down to a B-.