REVIEW: Flirting with the Camera by Ros Clarke

Karen of “Karen Knows Best” piqued my interest in this novella by saying the plus-size heroine has a great body image and is “an absolute breath of fresh air.” Then Jackie of “Romance Novels for Feminists” posted about the heroine’s rare backstory (she’s not only had an abortion but wasn’t utterly devastated by it) and I was even more intrigued. I already knew from reading Twelve Days that a Clarke story may take an unexpected direction, and I love romance which breaks with the standard cliches. I found it here… mostly. 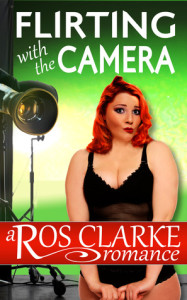 Fashion photographer Tom Metcalfe is looking for the right model to help him break into artistic photography, but the usual models he sees are all so young and uninspiring. (This section bugged me a bit, when Tom thinks about “stick-thin limbs” and “the dullest coat-hanger of a model”; I dislike it when people build up fat women at the expense of thin women. But the book doesn’t do much of that overall.)

Then Hattie Bell walks in, a charismatic, confident woman with a unquenchable dream of being in front of the camera, even though she’s too big even by plus-sized modeling standards:

“When the fashion people say plus-size, they mean average in the real world. I’m too fat.”

Tom didn’t bother to contradict her. None of the plus-sized models he’s worked with had breasts like Hattie’s. They didn’t have double chins, either, or fat which spilled over the top of their skirts. On the other hand, none of them had ever fizzed with energy the way Hattie did. And none of them had ever made him want to break through the invisible barrier of the camera lens to touch them.

Tom is not only attracted to Hattie, but senses a vulnerability behind her sassy exterior which speaks to his artistic side:

Bold, cheerful, confident Hattie with eyes that told a very different story. He would dress her in strong, powerful clothes, and then capture the chink in her armour.

Hattie’s equally attracted to Tom, and she has no hesitation at all in going after what she wants, but a sad history with a former lover makes Tom resistant to becoming involved with another model. This aspect of their relationship is pretty funny: Hattie is so flabbergasted and irritated by Tom pulling away from her, despite their chemistry. It’s a bit of a gender-bending scenario; I half expected her to complain of blue balls.

I enjoyed Hattie; her attitude is very refreshing but she’s also real — a fat woman in a fat-phobic society. No matter how great her self-esteem, some people (like her mom) will still give her a hard time.  (I loved it that she never even considers trying to lose weight — perhaps she has in the past, but that’s all well behind her.)  Her dream won’t be easy to achieve, yet you can also see why it’s closer than you might think, because her strong personality is an incredible asset — and the eventual resolution of her ambitions is a perfect blend of triumphant and plausible.

I have a particular love for reading about creative people, so I also really enjoyed Tom’s artistic journey, with descriptions of what he was trying to achieve and what he found in his photographs. This aspect of the story also highlights Hattie’s unique beauty.

The last quarter of the book was much less satisfying. The plot takes a standard romance turn and suddenly Hattie, who had been so wonderfully straight-forward, started being passive-aggressive and playing games. And commitment-phobic Tom goes into an uncomfortable emotional tailspin. I think the intent here was to continue genre-subversion by showing a more realistic, human reaction than we usually get in romance, but the result is that we see both characters at their absolute worst, and I’m not sure the romantic element ever entirely recovered.  This should have been the emotional heart of the story, so its failure for me had a large impact on my feelings about the book.

Overall, I think this falls into what Liz at “Something More” called “the good C+” — “what happens when a writer takes a risk that doesn’t quite work… Books with some real flaws, but also some great stuff.” I’m going to grade it up a bit, because at Dear Author, a B officially means ” It’s good and I would buy it again, given the chance.” I didn’t actually buy this — but I would. B-

→ Willaful
Previous article: Wednesday News: Backing up Kindle books; Kobo promises a return to business as usual in 1-2 weeks; Bridget Jones’ latest book has a great first day; Pumpkin spice has no pumpkin in it
Next Post: REVIEW: Reach For the Moon by Val Kovalin