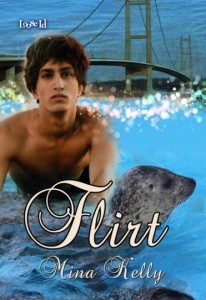 I wouldn’t normally start a paranormal series on book 2, but the recurring theme of communication issues intrigued me. (In this mythology, Selkies retain some seal aspects in their human form, and are essentially mute.) And as it turned out, the series is really only connected by subject, so it wasn’t a problem at all.

English fisherman Toby is startled when a hand reaches out of the ocean and desperately grasps his — and even more startled when he discovers the hand is attached to a bizarre mix of human and seal body parts. But he rescues the badly injured creature anyway, and takes it home to tend its wounds. There Toby discovers that removing the shredded sealskin around the being leaves an apparently human man. He can understand Toby, but can’t speak himself — which doesn’t concern Toby, since he’s deaf. Communication isn’t all that difficult, since the selkie knows some sign language; he even gives his name as the sign for “flirt.”

Toby quickly discovers that keeping Flirt a secret is impossible, though his father, who saw more than Toby had realized, at first just assumes he’s finally brought a man home. They’d never talked about it…He’d always meant to broach the topic, but as the years passed and he realized he wasn’t going anywhere, it just got less urgent. He had the sea and the shop and his father, and there wasn’t a lot of space in his life for romance. Haggenby had a lot of old bachelors; Toby had been counting himself among their ranks since he was twenty. Flirt’s outgoing personality forces Toby out into a world he had barely realized he’d withdrawn from, reminding him he used to enjoy friends and social activities. And despite his blathering about “temptation and loneliness and his father and the shop and responsibilities, damnit,” Flirt easily convinces him to enjoy other kinds of activities as well.

But there are worse dangers than being a gay man in a conservative small town. Flirt is being pursued by people who would destroy him in the name of science, and Toby will be pushed to his limits to keep his lover safe.

Told in a low-key, introspective voice that nicely fits the rustic setting and mood of the story — despite Flirt’s name, it’s not cutesy at all — this has a very authentic feel. The everyday details of Toby’s deafness never falter, and though he has some anger over how he’s been treated, as an adult being deaf is simply as part of who he is — an opportunity for his withdrawal rather than the true reason. The sex scenes, despite a nod to seal physiology, are also low-key. (Though frequent mentions of Flirt’s pronounced, sharp canines kind of unnerved me.) I most enjoyed Toby dreamily fantasizing about sex in the water, before he knows Flirt’s name:

The water would be warm, more Costa del Sol than up the coast from Scarborough. Clear too, so they could see what they were doing. The ocean floor would be smooth sand. The selkie would invite him into the water. Their bodies would meet. The selkie would slide his hands around Toby’s hips and press their cocks together. The tall, dark stranger, the living fairy tale, would nuzzle Toby’s neck and nip at his earlobes, draw him into a messy kiss. Their feet would leave the bottom. Toby’s body would rest on the other man’s. Waves lapping against their bare skin, he and the selkie would float, rubbing against each other.

Perhaps the most interesting part of the story is where it departs from the traditional elements of “fish out of water” and disability narratives: it’s not quite what you’d expect from simply reading a plot summary. Flirt has lived with humans before, which is where he got his name, and he’s perfectly comfortable with them. Although Toby does rescue him (twice), and helps him to learn more sign language, he’s not Flirt’s translator or conduit to the human world. Flirt helps bring Toby back into society — part of Selkie mythology is that they go where they’re needed — but mainly by making him realize what he’s been missing; it’s very clear that that includes a broader social life, not just a lover.  And the fact that both are disabled has virtually no impact on their romance.

The book overall feels a little slight, without the richness of characterizations or emotional intensity I most enjoy, and the end is both too pat and too up in the air. It’s a complicated situation and can’t be easily resolved, but I wasn’t quite satisfied. But the personal side, the balance they find of their differing needs, is just right. B-