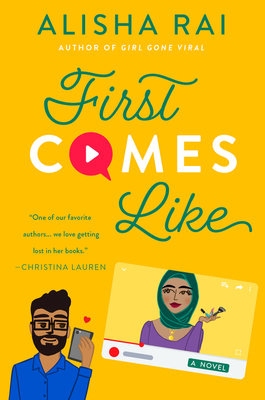 I’ve read and enjoyed the first two books in your Modern Love series so I was very keen to read Jia’s book.

Jia Ahmed is the youngest sister of Sadia from Wrong to Need You. At the end of The Right Swipe, Jia came to stay with Rhiannon and Katrina in Santa Barbara. She dropped out of medical school (thus severely disappointing her parents) and made herself a career out of being a fashion and beauty YouTuber and Instagram influencer.

She’s 25 and cares too much about what everyone thinks of her, particularly her family. She believes they think her flighty and “too much”. Over the course of the last year or so she’s been DMing and texting with someone she believes to be Dev Dixit, an Indian TV actor whose family is Bollywood royalty. Only, it turns out it wasn’t actually Dev himself who was messaging her, but rather someone with access to his accounts and pretending to be Dev – as she finds out when she attends a party in LA where the real Dev is present. Her Dev had been avoiding a face to face meeting and Jia is someone who makes things happen. Hence, the party. Only, real Dev doesn’t know her and she is crushed.

Dev is a wonderful guy. He’s kind of quiet and a little shy, careful and a bit reticent – and very inexperienced when it comes to relationships. Unlike most of the other male members of his family, he’s not one to jump from bed to bed with co-stars or groupies. When he understands what has happened to Jia in his name he is horrified and wishes to try and make it up to her. Also, he was deeply smitten by Jia when he met her and that’s a factor.

Dev has moved to LA from Mumbai with his uncle Adil and his 13-year-old niece, Luna, to star in a US drama series and build a Hollywood career for himself. Luna is the daughter of his younger brother who died about a year earlier and he now has guardianship of her. His grandfather, who also died fairly recently, left a will requiring him to get married within a short timeframe in order for him or Luna to inherit a portion of his vast wealth. Dev decided he did not wish to play that game and so struck out on his own.

Dev’s relationship with Luna is so touching and sweet. He’s so very careful about in how he parents her, taking advice from a therapist and educating himself about modern young girls and their needs, respecting her bodily autonomy while also setting reasonable boundaries about things like bedtime and phone usage. He’s trying so hard to be a good uncle and caregiver to her and to help her through her grief at losing her dad. Their relationship is a delight to read.

Dev’s culture and Jia’s are both displayed in various ways throughout the book, particularly through Dev’s relationship with his uncle Adil and Jia’s with her family. Jia’s parents were born in Pakistan, Dev’s family are from India. He was raised in Dubai however, when his father was disowned by Dev’s grandfather for marrying a Muslim woman who was not of their social status. After Dev’s parents died when he was 16 and his brother, Rohan, was 13. After that, the brothers lived with their grandparents in Mumbai and were surrounded by adoring fans and luxury due to their grandfather’s Bollywood fame. Both brothers became actors; Rohan following in his grandfather’s footsteps, while Dev gravitated toward soap operas.

Their respective cultures also strongly influences the trajectory of the romance. It is extremely chaste for much of the book, which entirely suited the characters. They do not so much as hold hands for a long time. But it is clear they were developing feelings for one another as they spend time together. It is very early in the piece when Dev and Jia are photographed in what looks to be an embrace (it is not – he is protecting her from prying paparazzi eyes and they are not actually touching) and shortly after, Jia finds herself telling her family that she and Dev are dating. Yes, it’s a bit of a leap but the context was that Jia is fairly desperate for some parental approval and appearing to be in a relationship with Dev Dixit certainly takes some of the pressure off. Dev is happy to go along with it both because of his sense of obligation but also because he has by then watched all of Jia’s videos and developed a massive crush on her. Jia most definitely does not wish her parents to know she was catfished. She’s humiliated by this and feels they would only use it as fodder for their belief that she is irresponsible and cannot take care of herself.

Fake dating becomes a fake engagement later on due to media pressure (I won’t go into the details because spoilers so I’m deliberately keeping this bit vague) and then all the family have to meet everyone – which eep!

Jia and Dev get their HEA at the end of the book of course. I was so happy that some of the things I feared would happen didn’t. Jia and Dev have open conversations with each other for the most part and tell each other their feelings and what they want. Dev is not good with flowery words in English and he’s naturally reticent so some of his communication is a little clumsy but they don’t let misunderstandings stand in their way for long. Mostly.

When a thing happens (again, vague because spoilers) which makes it okay culturally for Dev and Jia to become intimate, things took a turn for me however. Everything suddenly became very rushed. I was surprised to find that there were less than 40 pages left in the book. So many things felt underdone or unresolved that I ended the book feeling vaguely dissatisfied, which was particularly a shame because up until then it was my favourite book in the series. I had so many questions and I was unconvinced by some of the handwaving about what was next. Luna’s life had been upturned again by Jia’s arrival on the scene and not enough time was spent addressing their relationship and showing them building something between them. Dev’s career was also a thing that felt underdeveloped; a huge event happened and it was kind of just shrugged off. Future plans were a little too vague. Jia and Dev got together at warp speed and so many important conversations had not occurred. I found it difficult to reconcile.

The conflict at the end didn’t quite make sense to me. It was a fairly mild conflict (which I was happy about – I don’t need a huge blowup to enjoy a reconciliation and HEA) but I did not see an explanation for Jia’s somewhat out of character behaviour that led Dev to believe as he did and therefore to their conflict.

I would happily have read more about Jia and Dev learning to live together and join/build their family. I would have been equally as happy if the book had been kisses only to be honest. The intimate scenes didn’t have the same flow as I’ve come to expect from you. You write sex really well but for Dev and Jia, even though I believed in their attraction, their intimate scenes were just too fast. I needed more foreplay I guess. The heat level went from 0 to 10 in one paragraph and I wasn’t ready.

For the first 250 or so pages of the book it was tracking for me at an A-. But the last 35 pages or so felt like a different book altogether and the effect was jarring. That part rated around a C+. Smushing all that together, I end up at a B-.