I haven’t been an avid reader of urban fantasy for some time. Like many people, I burned out on the subgenre when it seemed like 10 books were coming out every month. That said, I do occasionally check out new releases from new(ish) authors in the hopes of finding something that sounds different. The premise of Feast fit the bill. 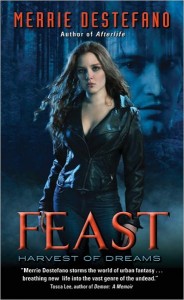 Madeline MacFadden is a bestselling writer. Or was, until her bigshot Hollywood husband left her for her best friend. Suffice it to say, her personal life is in shambles, leaving her with a massive case of writer’s block. In order to inject some much needed inspiration into her life, as well as a very welcome change of scenery from the watchful eye of the media, she takes a trip to the small town of Ticonderoga Falls where she spent vacations as a child.

But Ticonderoga Falls has a secret. It is ruled by demons. While never named, I assumed they were some form of incubi and succubi by the way they fed on dreams. As the result a curse set upon the town many decades ago, the inhabitants have become the captive prey of these demons, unable to leave and subject to their whimsies. Even worse, the time of the Harvest has come when the demons prowl the streets and feed.

But there’s also a power struggle going on behind the scenes, where another set of demons want to usurp control of the town from its current master, Ash. And who should happen to walk straight into the crossfire but Maddie and her young son.

While reading this book, I was reminded quite a bit of Neil Gaiman. Not just because of Maddie’s character, who writes comic books, novels, and screenplays and has a cult following that track her all the way to Ticonderoga Falls, but because of the way real world and fantasy dream worlds blend and overlap in the setting. Much like in a Neil Gaiman work, Maddie accepts the fantastical without fuss. It’s a change of pace from other urban fantasy and paranormal romances I’ve read where there’s at least one loud and public denial about what they’re seeing.

I liked how the demons were truly demonic. They were not human and they didn’t act human. They viewed humans as prey and treated them as such, sometimes toying with them the same way a cat does with their food. Make no mistake, they had similar concerns as humans: taking care of children, protecting their property, relatives they dislike, but they were monsters and the book never lets you forget that.

I’ve of two minds about the narrative. It features an alternating first person POV between multiple characters. I’m used to seeing this done with two characters, but Feast does it with at least 5. In the end, I think it worked out but I felt that the constant switching at this length may have skimped out on some character development. For example, the main antagonists read as very two-dimensional to me. While I did think their motives were very believable, not enough meat was given to their storyline to elevate it beyond a power grab.

The romance subplot, if you can call it that, between Maddie and Ash didn’t leave much of an impression on me. I never really understood why Maddie found Ash attractive, especially after she realized what he was, nor did I ever come to believe that Ash saw Maddie more than as prey. Part of this, though, might be because if I found out I was in a town filled with demons, I’d have gotten the hell out as fast as possible. Or, at the very least, when I stumbled upon a dead body, only to have it disappear when I bring the cops. Maybe that’s just me. Of course, if Maddie had done that, there would have been no story.

While I thought this novel required me to suspend my disbelief more than it should have, I like the idea of it. I picked it up expecting yet another urban fantasy but discovered it gave me something. I think there are some sections that are more reminiscent of horror than of fantasy, and I enjoyed those creepy bits. At the very least, this has made me more curious about your work and I will be checking out Afterlife shortly. B-

→ Jia
Previous article: Monday Midday Links: A New Fave Cover and Book Group Sale Sites
Next Post: A Review-ish Rant, aka what happens when an author breaks the fourth wall