When we did a series of reviews on some of Georgette Heyer’s novels, many people listed “False Colours” as a favorite. Since I’d never read it, I decided to give it a whirl and see what I thought. Thought it has its charm, is amusing and is filled with well drawn characters, there are a few things about it that will keep it from the top ranks of my most loved Heyer novels. 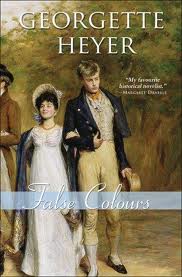 As the younger son, Christopher (Kit) Fancot entered the diplomatic service while his elder brother Evelyn was due to inherit the Earldom at their father’s death. The two have always been close and when Kit senses something amiss at home, he rushes back home from abroad. Upon his arrival at the family townhouse in London, his loving but flighty mother, Lady Denville, informs him just how bad things are. She is deeply in debt – again – and, due to the will left by their father, Evelyn will not be able to control the estate funds and pay her vowels until he marries a woman of whom their fraternal uncle approves. He’s been courting a young woman, Miss Cressida Stavely, who the family thinks will fit the bill though there is no violent passion on either side. Only before the match can be announced, Evelyn must past muster with Cressy’s gorgon of a grandmother – the Dowager Lady Stavely.

The problem, as Lady Denville explains it to Kit, is that she lost heavily at cards and pledged a piece of jewelry – one of the many she’s had secretly replicated in paste in order to be able to sell the original to pay down her other debts – to a incorrigible gossip who would take great pleasure in exposing that fact should he figure it out. Thus Evelyn had set off to try and redeem the piece before the man could attempt to sell it. That was days ago and nothing has been heard from Evelyn since. Lady Denville wouldn’t worry except that the Stavelys are expecting Evelyn at a dinner party the next night and if he’s a no show, it’s for sure that the Dowager Lady Stavely will take it as an insult and withhold her approval of the match.

It’s then that a brilliant idea occurs to her. Kit will impersonate his brother for one night and hopefully Evelyn will appear soon and all will be well. As identical twins, the two brothers have often been mistaken for each other. Against his better judgement, Kit agrees and the evening goes well. Knowing he’d better not stay in town and risk being exposed in the ruse, he flees to their country estate but instead of getting better, the situation only gets worse. Lady Stavely announces she and Cressy will visit him plus the one parsimonious sibling Lady Denville possesses sees a chance at a free country house visit for the summer and arrives with his fussing wife and professional invalid son in tow. Not about to abandon Kit in his hour of need, Lady Denville also gives up the pleasures of town along with her long time loyal beau, Sir Bonamy.

With this cast and crew plus several ancient family retainers watching his every move, can Kit keep the masquerade going until Evelyn, where ever he may be, finally arrives? And what will happen as two people who shouldn’t fall in love find themselves doing just that?

Unlike most books I’ve read from this era, False Colours is told mainly from hero’s POV but this is needed because Kit has to be in the dark about where Evelyn is and as to what Cressy’s feelings are as well as what she knows about what’s going on. I wished for at least some small hint that Evelyn was alright as I began to worry about him too as the story progressed with no clue as to his whereabouts. The plot moves forward in increments. Entire days are described in – take your pick – exquisite or excruciating detail. The opening two chapters of the book should give you a feel for the style/speed of the story and if you don’t like it, move on to another book. There are plenty more Heyers left to choose from.

Amabel, Lady Denville, is a charming widgeon, as Dowager Lady Stavely says. Vivacious yet flighty, mannered yet able to think on her feet when curveballs are thrown their way while attempting to maintain Kit’s disguise – it does not do to underestimate her. I laughed at how she almost consoles Kit for being the sensible, level headed man he is. But she’s also a tigress in defense of either of her sons as well as a staunch friend to Cressy. Cressy is an unknown entity for much of the book. Read carefully and it’s noticeable when she begins to catch on that something isn’t right and also when she declares her love for Kit. Though she doesn’t declare it to Kit.

Poor Kit is the one upon whom the burden of maintaining the charade mainly rests. He’s got to remember to act like Evelyn in public and attempt to mimic his twin’s mannerisms with a snuffbox while keeping straight how Evelyn is supposed to feel about everyone at the house party. On top of that, he’s also worried sick about his twin and sick at heart that he’s falling for the one woman he feels he can’t have or else the whole house of cards will come crashing down on the Fancot family. The “I love yous,” when they finally arrive, are done with quiet fervor rather than loud fireworks but are just as satisfying, I find.

I had great fun reading about the relationship between the Quality and servants. Kit gets away with very little around Evelyn’s valet or the groom who taught the boys to ride or their nurse who still enjoys fussing over both of them. Old time retainers like the valet, groom, town butler, and old nurse have much more leeway in what they can get away with vs the newcomers like the Ravenhurst butler and housekeeper. But everyone closes ranks against outsiders such as when Kit easily depresses the pretensions of Mrs Alperton whom even the country butler pegged at her much lower social status and was ready to fob off as well.

What didn’t I like? The cant, cant, cant – I would guess almost every phrase Heyer either learned or made up is here. Kit speaks cant, Amabel speaks cant, the valet and groom speak cant, the guests spout it. It’s almost like a chocolate cake with chocolate chips and topped by ultra rich chocolate frosting – too damn much. Give me a glass of milk and get back to plain speaking. A little cant goes a long way.

The romance is very slow. Very, very slow. It’s not until almost the halfway mark that things begin to move faster than glacial. If you want details at a stately pace, this is the book for you but if you’re used to today’s faster clip, mentally prepare yourself to sit and savor.

This is not a Heyer book I would recommend to someone unfamiliar with traditional Regencies or with Heyer books. There are better places to start with her oeuvre. It would also help if you’ve got some grounding in the Regency era. As I said, it’s not the first Heyer book I’d suggest but if you want something different as well as liking a country vs London or Season setting, then False Colours should be on your Heyer list. B-