REVIEW: Fairies in My Fireplace by R.L. Naquin

In an effort to bring more topical reviews, particularly in the paranormal romance and urban fantasy arena, I’ve been out recruiting for Dear Author. This is Mary Kate’s second review for us. For those who asked about AJH’s absence, he has taken his show on the road. You can find him at Wonkoromance and Heroes and Heartbreakers! 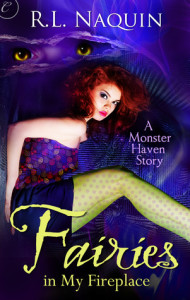 First of all, I’d like to say thank you for this delightfully quirky and strange third installment of your Monster Haven series. The characters are warm and sweet, mostly relatable with just enough spice to make them believable. However, I believe “subtle” is a word that is verboten in this universe. Zoey Donovan is a newly discovered Aegis – one with special abilities who attracts the Hidden of society, those who are distinctly not human, but who have to live within the human world. With the help of her vast cast of friends, Zoey must discover why Hidden all over the United States are going missing – and stop the mysterious Collector.

For someone who hasn’t read the first two books in the series, it was a little difficult to fall into the story and figure out who came from where and why. Some characters and their relationship to Zoey – Andrew and Milo, for example – were explained fairly well, but Riley, Zoe’s significant other, was a bit of a mystery. It took quite a bit of reading between the lines and digging out of context clues to figure out his role in everything. I thought, at first, that there’d been a typo in the description of the book and that it was paranormal romance – I’m used to the two going together like a fennec fox and oversized ears. But I was wrong – this was straight paranormal with just a tiny bit of romance tossed in, almost as an afterthought. Which is kind of a shame given that this book showed some relationship progression that deserved a good bit more screen time than it received.

I have to say that the secondary characters absolutely won my heart and made me want to read more of the series. From Molly the Brownie to Maurice the Closet Monster to Iris the Skunk-Ape, all of them were beautifully developed with just enough “humanity” to appeal to readers, yet there’s just enough otherworldly about them to set them apart. Sarah, Zoey’s best friend and business partner, turned out to be the surprise hit for me – she’s a perfect blend of friend, confidante, judge, and kicker-of-behinds when needed.

Overall, the book felt a little light in places, as if there could have been a little more literary meat in there, but it was trimmed off for some reason. I wanted to know a bit more of the Collector’s story – there weren’t enough details in there to satisfy inquiring minds. I wanted to know about motivation for the Collector’s actions and even a little history. Certain important plot points weren’t elaborated on to the point where they made sense – it was if I were grabbing for explanations and hoping what I took a guess at was correct. One other thing that didn’t quite work for me was the cliffhanger ending. While quite a bit of the main plot was resolved, it felt as though things were left too unfinished. The overall metaplot was progressed incrementally, at an almost glacial place, with bits dangled in front of the reader then snatched away, rather like a cat toy in front of a cat.

All of that being said – I want more. The narrative drew me in to the world, immersing me in quirky delight. The characters, for the most part, were vivid and interesting with quick, witty dialog. Since I came into the series with the third book, I decided to go back to read books one and two. The third follows in the same vein, but isn’t quite as strong as the others. It feels more like a transition into the next phase of the Monster Haven’s incarnation. The monster under the bed in this book isn’t quite as friendly as Maurice, but neither is it a grumpy, pregnant sea serpent. B-

Previous article: Giveaway: You Knew Me When by Emily Liebert & a custom set of ZOYA nail polish
Next Post: REVIEW: The Other C Word by MK Schiller