REVIEW: Eyes of Silver, Eyes of Gold by Ellen O’Connell

When I saw that Kristie J. highly recommended your self-published Western, Eyes of Silver, Eyes of Gold, I admit I was excited but also trepidatious. I’m always a bit wary of Romance novels featuring Native American protagonists, because the stereotypes seem so entrenched in the genre. The opening scene of the book was so suspenseful and compelling, however, that I knew early on that this was not the book I was expecting, which turned out to be a good thing. Despite the fact that I think the book would benefit substantially from additional editing and less telling, I found the voice fresh, the characters engaging, and the storyline emotionally satisfying. 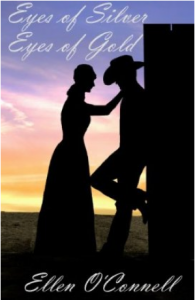 Anne Wells does not want to marry any of the men her father wants; in fact, she has proven so resistant that her father has locked her in her room and is starving her, hoping he can weaken her will enough to wed her to his latest pick. Anne is already more desperate than her father could ever guess, but her desperation drives her to escape her home and run to the one place she hopes she can hide in safety. And when Cord Bennett finds a wet, cold, sleeping woman in his barn, it seems Anne is correct, because Cord merely sends her into his house for a warm meal and a frank conversation.

Anne knows it’s not Cord Bennett she has to fear, despite his reputation for being a “half-breed bastard,” Cord is merely a man tired of living under everyone else’s prejudices, and who now keeps to himself and to the horses he trains to support himself on his family’s Colorado ranch. Cord and Anne met as children, and they developed a mutual affection and respectful trust early on, even though it never really went anywhere. Still, Cord is willing to help Anne escape her father’s tyrannical marriage plans, which gives her great relief. Until, that is, some men her father hired manage to track her to Cord’s place, where they proceed to force Cord and Anne to marry on the spot, celebrating the event by beating both of them brutally, believing they have killed Cord and almost raping Anne (she saves herself by accidently vomiting on her attacker).

Anne’s father, Edward, who has been present for the whole disgusting event, merely admonishes his daughter, who is lying on the ground near her would-be savior:

“You brought this on yourself, daughter. Honoring thy father as commanded would have spared us all this disgrace. . . You are filthy in every way and I won’t have you on a horse with me. You get yourself cleaned up and consider how you’re going to convince me to allow you back under my roof.”

Not surprisingly, Edward’s stubbornness is matched by Anne’s own, and thanks to her tenacity and nothing short of a miracle, both Cord and Anne manage to survive. For days following the attack, Anne is solely responsible for Cord’s animals and for Cord’s care. She has no idea if he will survive, or even what is wrong with him internally. And she doesn’t know when the men who tried to kill them will return, or what will happen when they do. Still, the experience emboldens her:

Anne had lived her whole life following the dictates of others. Now all the decisions were hers. What to do, when to do it. How to do it, so much depended on her, but instead of feeling weighed down, minute by minute, hour by hour, this new life wove a spell around her, leaving her feeling lighter and freer than she had ever dreamed possible.

So when it becomes clear that Cord will ultimately heal from his injuries, Anne is determined to protect him and Bennett Ranch from any and every predator, including Cord’s mistrustful brothers, her own brother and father, and myriad townspeople who think that Cord’s Indian blood and proud, defensive personality make him a virtual savage. In fact, Cord’s sister (his father married twice, and his second marriage, to an Indian woman, yielded Cord and his sister), Marie, married a white man and moved away from the family at her first opportunity, leaving Cord to fend for himself against the town’s ambivalent attitudes. Cord had spent some years in Texas, but homesickness brought him back to Colorado, where he has become a talented horse breeder and trainer, work that brings him enough income to live somewhat isolated from the townspeople.

Some of those people, like Sheriff Noah Reynolds Cord’s older sister, Hannah, and his sister-in-law, Martha, respected Cord and wanted to protect him. Others, like his brothers, Ephraim and Frank, kept their distance from Cord, and were not sure what to think of his violent reputation. No one really knew what to make of the purported marriage between Anne and Cord, including Anne and Cord themselves:

He could smell the slightly spicy scent of her. “Mm.” He wondered what would happen if he just put an arm around her here and now and tried holding her. If she made a face in the darkness, he’d never know.

What happened was she nestled in the curve of his arm, head on his shoulder, and whispered, “This is the nicest Christmas I’ve ever had.”

It sure as hell was.

I have always been a fan of the arranged marriage device, because I think it forces an emotional intimacy between characters who might otherwise have only a physical attraction or who would likely walk away from each other because of a difficult relationship. In Eyes of Silver, Eyes of Gold, however, the device serves a dual purpose. It forges the natural alliance the characters have with each other, and with the reader, who immediately sympathizes with their persecution. But it has a deeper narrative purpose and effect. Because Cord’s racial identity is so much a part of the town’s distrust and dislike of him, it would be easy for the reader to identify Anne and Cord’s relationship purely in terms of that prejudice – to root for the success of their marriage merely because of the unfair discrimination against Cord. While that might be emotionally satisfying, it would not necessarily challenge a lot of the racial stereotypes leveled against Cord (or the stereotypes the reader might bring to the book from other Romance novels featuring Native American characters, namely the “noble savage” hero-type).

Here, though, the arranged marriage between Cord and Anne places their own relationship – one that exists within an awareness of the racial hatred aimed at Cord – above the stereotypes. In other words, it draws the reader into a position where they must confront Anne and Cord, as well as the difficulties in their relationship, within the context of the individual characters. Cord, for example, has certainly been affected by the negative views of his Indian heritage, but some aspects of his personality are intrinsic. He is independent, quiet, assessing, and scarred by personal loss in a previous relationship. Like Anne, he is hardworking and straightforward, inexperienced with love and expectations that go beyond physical intimacy and the daily responsibilities of a shared life. That Anne has to stand up for both herself and Cord both builds her confidence and increases her sensitivity to the attitudes Cord has encountered his whole life.

Watching them struggle with the uncertainties and discoveries of a strong emotional and physical connection is made more poignant by the misconceptions people have about Cord, but for me the novel struck a nice balance between focusing on racism and developing a romantic relationship between two complicated, multi-layered individuals. The sub-plot around Anne’s father’s revenge (and her brother’s racism and her mother’s weak betrayal) was nicely executed, with several unexpected turns away from easy melodrama to something more interesting.

The way the book handles the relationship between the town’s prejudice and Cord and Anne’s relationship is one of its greatest strengths. There were moments in the book where I felt that given the book’s setting, Mason, Colorado, the late date, 1885, that the profoundly negative views of both Anne and Cord were not nuanced enough for the changes the second half of the 19th century had wrought on American multiculturalism and intermarriage. There was also the use of the word “haters,” which threw me out of the book every time I read it and belittled the serious issues the book was contemplating. Further, the overall language was relatively plain, sometimes downright flat, which sometimes weighed the narrative down but, at the same time, fit well with the Western setting and ethos of the novel.

The book’s real weakness, however, is that it is overwritten. In fact, it reminded me a lot of the first Judith James book I read, which was fresh and compelling but way too long. Eyes of Silver, Eyes of Gold shares that problem to the point where the telling sometimes threatens to overwhelm the emotional impact of the story:

Edward Wells had been angry when he’d realized his daughter would not come home. When he realized she was not in Chicago as everyone supposed, his fury knew no bounds. In Edward’s opinion Anne needed to spend the rest of her life living like a recluse in Chicago to mitigate the disgrace she had brought on the family . . .

Having for years been obsessed with seeing his daughter married, Edward was now obsessed with seeing her marriage ended. He would have like to just ride out to the ranch with another mod and take her, but Edward knew that when the Double M men left town two of them had gunshot wounds. He had heard rumors about how they got those wounds.

There are a total of seven in a row detailing Edward’s obviously villainous perspective on Cord and Anne, and the mix of omniscient third person narration and interior monologue can sound pedantic and even rambling. With some good content editing, though, I think Eyes of Silver, Eyes of Gold could have been an A read for me. I enjoyed the protagonists, was engaged with the large cast of characters and the negotiation of so many different relationships, and appreciated that the issues around Cord’s race were not, for the most part, simplistic and heavy-handed. And while the somewhat undisciplined narration served as a periodic distraction, it wasn’t enough to ruin my interest and make me put the book down. B-

→ Janet
Previous article: Search by Publisher at Amazon for Low Prices
Next Post: Thursday Midday Links: Is Harlequin Trying to Move the Brand Away from Romance?