REVIEW: Entwined with You (A Crossfire Novel) by Sylvia Day

**NOTE: This review contains mild spoilers for the two previous books, as it’s impossible to talk about the storyline of Entwined with You without referencing earlier events. I’ve tried to remain as vague as possible.**

I think that your Crossfire series qualifies as “extreme romance“. Even though it portrays an incredibly screwed up, emotionally damaging relationship between two people, your writing and characterization make it a compelling read. Those who have read the previous two books in this series, Bared to You and Reflected in You know that Gideon Cross and Eva Trammel have been struggling through both of their difficult pasts to build their future together. 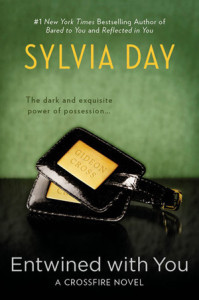 When we left the couple at the end of Reflected in You, Gideon had gone as far as someone could go to protect Eva, but the emotional fallout of his actions have made Eva wary. In order to carry out his plan, Gideon cut Eva out of his life, allowing the world, and Eva, to believe that they had broken up,and  going so far as to be seen with a former flame to carry out the deception. Eva was devastated, and when she finally discovers the truth about what Gideon has done, she’s both deeply touched by his actions and horrified that he’s gone as far as he has. She worries that carrying out his plan has scarred him irrevocably. Gideon already suffers cruelly from his horrible past, and now his actions will only compound his angst.

Now Gideon is back in her life, but it must be a secret, as there is an ongoing police investigation. He takes the apartment next door to the one that Eva shares with Cary, her roommate. They sneak to see each other as often as possible, but must keep their relationship under wraps. Eva is struggling to forgive Gideon for hurting her, even as she can’t seem to stay away from him. As the two are finding their way, the usual dramas are playing out in Eva’s life. Her mother is still keeping too tight tabs on Eva’s whereabouts, her father has just found out about the abuse that Eva suffered as a child, and Cary is still messing around with the hot model and the hot vet, not making a choice, but seeing both.

What to say about this book? I gobbled it up and enjoyed every moment of it. That being said, I think it is problematic. The first issue being that this series was originally sold as a three book series, which has now been extended to a five book series. Which is great, except that this book had the feel of filler to me. When I started it, I wasn’t aware that the series had been extended, so when the book ended, I literally kept pressing the screen on my iPad, thinking there was more. The ending is ABRUPT, and mostly unfulfilling. The book meanders a bit, I think with the intention of building the bond between Gideon and Eva. But honestly? Their relationship is so remarkably dysfunctional that its unsettling to read. While I have no doubt they love each other, Gideon’s actions, in particular, are extremely stalkerish. He tracks Eva’s phone, he knows where she is at all times, he wants her to come work for him so he always knows what she’s up to.  I would have liked to see the story move ahead more. It felt like there were all sorts of little dramas playing out without there being any definite climax (forgive the pun). It almost felt to me as if you’d written a larger book, and then split it into two parts.

All of that being said, the characters are compelling, and the book itself is well written and the characterization is interesting. The sex scenes in this book are extremely hot and they do advance the connection between the characters. Overall, I’m still interested to see the resolution of Eva and Gideon’s story, but I’m really hoping the next book has more action. Entwined with You gets a B- from me.