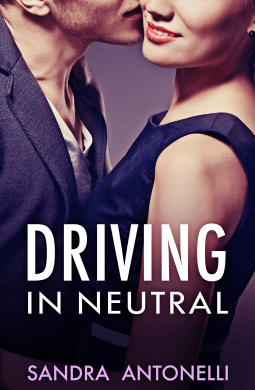 A new, quick-witted, quip-heavy romance for grown-ups from Sandra Antonelli about facing your fears — because love is the greatest risk of all.
Levelheaded Olivia Regen walks away from her car-racing career and the wreckage of a bad marriage to take on new work that’s far removed from the twists of racetrack. Her new life is about control, calm and the good friends that she adores.

But her first day on the new job involves getting up close and too personal with her claustrophobic boss, alone in a broken elevator. Her unconventional solution for restoring his equilibrium shocks them both and leaves Olivia shaken.
Determined to stick to her plan, Olivia drives headlong into work and planning her best friend’s wedding, leaving no room for kissing, elevators, or workplace relationships. But Emerson is not one to be out-manoeuvered. Can he convince Olivia that her fear of falling in love again is just another kind of claustrophobia – one that is destined to leave them both lonely?

Even before Jane forwarded the information about your latest book, I had already taken notice of it on our submissions page. As you’re one of the few authors I routinely read who features older heroines and heroes in leading romance roles rather than just sticking them in background roles for yuks, I knew I was going to at least try it. I do love catching all the references to things I grew up with such as the “Love Boat” and Olivia’s taste in music.

My, this book has the wedding from hell. A Diva Bridezilla – and she needs those capitals – plus some wedding party members who need a hard right hook to the jaw (these are the bride’s friends?) – are enough to drive anyone but Olivia around the bend. But Olivia handles it with her usual cool, calm demeanor and refrains from telling them where they can stick it. If it were me there, I’d have caught a charge for assault before the vows were finally taken.

Wow there are a lot of secondary, tertiary and quaternary characters in this book. I feel as if I need a scorecard to keep them all straight and wondered if I truly need to keep up with them. In the end I decided that I truly needn’t have bothered with the effort to keep most of them straight.

The blurb does not lie about quick-witted and quip heavy and thankfully most of that is from Olivia’s mouth. She’s smart, she’s sharp, she’s intelligent and she’s fearless. She can also puncture Emerson’s ego and – sometimes – assholic behavior without even breaking a sweat. Even though Olivia is more than ready to verbally defend herself and zap unwary males who try and tease her, I did get tired of the sheer number of times this happens. After getting caught in the elevator with Emerson in a rain drenched state and with her skirt raised to get her knickers untwisted, he gets the wink-winks and she gets the snickers. The fact that this is Real Life makes it all the more depressing.

Emerson is a conundrum. He can spout the most asinine drivel for the longest time and truly seems to have his foot in his mouth every time he’s around Olivia. The man can be clueless about how clueless he is but the analogy of him reverting to a tongue tied awkward teenager who is flustered by the discovery that he really likes a girl is an apt one. He is like the men who want to impress a woman so badly that they end up acting like a fool or a twit.

Olivia is in neutral or as the title suggests, her life is going along in neutral on a straight road to nowhere. Readers see her as calm and in control but only her friends realize how “flat” she is after arriving home from her public and painful divorce. If she doesn’t get emotional, she feels she won’t be hurt again. It’s going to take a lot to pierce her shell.

Yet Emerson is the man to do just that. He finally gets his footing at the wedding and that is when the sweet romance starts. Emerson and Olivia actually begin to talk to each other rather than just slinging barbs and rapier responses. They get to know each other, revealing intimate details of their lives and past mistakes. They talk before taking it physical so when they do finally do that, it means far more than sex. He makes Olivia realize that she’s missed having emotional “road curves” to handle with her lightning fast reflexes.

Emerson also loves Olivia’s quickness, self possession and confidence. He freely admits to the other guys that he wants a woman with experience in her life rather than just big boobs. I like that Olivia isn’t desperate to get a man in her life or indeed, even to find a date for the wedding. She’s just fine going solo, thank you. The farting sofa scene and Olivia’s protective neighbor were hilarious, too.

Both have failed marriages – Emerson’s is more from neglect rather than anyone being an ass while Olivia’s starter marriage was followed by her younger man, Eurotrash race driver marriage. She starts thinking never again, so when she does lose her heart and falls, the betrayal she feels is gut wrenching. The way she handles that is reprehensible but her pain is understandable.

These two get taken to the edge before the romance gets reeled back in. Frankly after how Olivia acts and what she does, I wondered if Emerson would be able to forgive her. If not for his determination and that of their friends in trying to get them back together, all would have been lost. The end of the book was too abrupt for me but they’ve already said a lot and maybe Emerson will concentrate on changing Olivia’s mind for good rather than hyperventilating on the elevator ride down. B-

→ Jayne
Previous article: REVIEW: The Hook Up by Kristen Callihan
Next Post: Daily Deals: There’s a money back guarantee in this post. Really.