REVIEW: Down for the Count by Christine Bell

What a totally fun, sexy, and contemporary romance. The story is driven by well known tropes but the writing and the characters made it a fresh read. 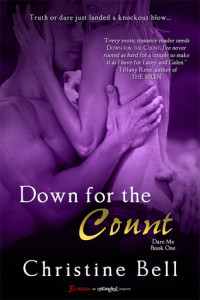 Lacey Garrity finds her husband with a bridesmaid during the wedding reception and flees on the back of her best friend’s brother’s motorcycle. The brother, Galen Thomas, and Lacey have known each other for years and while there’s always been a spark of attraction between the two, by the time the two were old enough to date they always had partners.

Galen convinces Lacey to go on her already paid for honeymoon in San Juan and says he’ll come with her.  They go and have a fantastic time during which Galen urges Lacey to overcome her tendencies to hold back.

The one bad thing about the book is the lack of surprises.  The story uses gimmicks to create sexual tension like a high school game of I Never wherein Lacey reveals her inability to orgasm while have sex with a man.  This, of course, only serves to bait Galen into taking action.  He’ll show her how it is done.  Lacey’s marriage to Marty was done for a business deal, a merger although I didn’t really quite understand it because Lacey’s family business was a law firm but nevertheless it was an easy way for Lacey to feel both bound by familial obligations to Marty but also excuse her quick emotional recovery from their marriage bonds being severed.

Despite the well worn path and predictable nature of the story, the fun dialogue and the good natured characters propel the reader quickly through the story.  It takes some obvious suspension of disbelief to buy into the holiday romance, even with the pre existing relationship because a) she’s coming off of her marriage to another man and b) it happens so quickly.

The chemistry between Lacey and Galen is obvious and Galen’s honest and frank appreciation for Lacey was sexy and entertaining.  There was one scene in the story that had me laughing out loud even though I was skeptical that Galen wouldn’t have caught on to the signals another couple was sending them both.

Galen is a boxer, hence the title, and while the references to his boxing was minimal, it was believable and decently integrated in way that didn’t dominate the story such that sports enthusiasts and those who are disinterested could still appreciate the story.

Lacey shows the most character growth, despite the short time span, and it comes off as fairly authentic.  As she is helped to find security in her person, she is more capable of handling the challenges externally, like standing up to her mother or pursuing the man of her dreams.  I enjoyed this book quite a bit and think most readers looking for a quick, fun, sexy read would not be disappointed.  B-