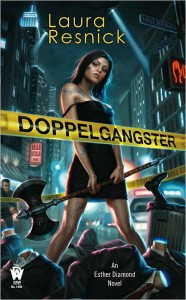 Has it ever been a long wait for the follow up book to “Disappearing Nightly!” Which I’m sure I don’t need to tell you about. When I read, and loved, it in late 2005, I was peeved that it would probably take a year to find out if Esther and Lopez would get together. Little did I know…So I was a happy camper when news of “Doppelgangster” reached me and even happier after I’d finished it and read that there should be at least two more books to look forward to in the series.

Esther Diamond, aspiring actress in New York City, finds a whole new set of Evil People up to no good in the five boroughs. After the show she was in closes, Esther returns to waiting tables at Bella Stella, a restaurant frequented by several members of the Mafia. When she witnesses a mob hit, even though she didn’t actually see anything – and isn’t that the excuse all would be witnesses tell the police? – she and Max Zadok, along with wise guy Lucky Battistuzzi, find themselves frantically racing to eliminate someone who’s clever, connected to magic, and trying to start a mob war in the Big Apple. Oh, and keep Detective Lopez, who’s just been transferred to the Organized Crime Control Bureau, from figuring out what the three of them are really up to.

While the plot, as a whole, is creepy enough to give me the same willies it does to Max, Esther and Lucky, it doesn’t exactly zip along despite the short length of time the action actually encompasses. First our three principles have to get a rough idea of what’s going on, then it all gets rehashed every time someone new has to be told about it and then the basic information must be honed and new insights discovered, usually through improbably circumstances, just when needed. As bored as Esther and Lucky got reading and researching in Max’s antique book collection, I was still more bored reading about them doing it.

There’s a lot of talking and more talking and still more talking that goes on in this book. And the sparkling dialogue that delighted me in the first book makes only sporadic appearances here. Without the A grade I gave to “Disappearing Nightly” and my anticipation for this book, I’m afraid I might have tossed in the towel before getting to the good parts here. The scattered “now why aren’t they clueing into the glaring warning signs” moments didn’t help either. It’s not that I expect this plot to make total sense, things come from seeming nowhere on a routine basis, but I expect the main characters, who’ve spent the whole book fixated on what they think the problem is, to recognize the problem when it shows up right in their faces.

I had also hoped for more romance between Esther and Lopez. They’re certainly willing and give it their best shots but I need more. And then the ending, while it does make sense, isn’t the reward I’d hoped for them for the whole book. However, I will continue to cross my fingers that you have more planned for them. And I’m also willing to overlook a lot of disappointment for Lopez’s last line in Chapter 25. Yes, it’s that line that boosts the total grade to B-.