You can count me among those who hopefully waited for Conner's story for all these years. Despite the faux Brogue which usually drives me screaming around a bend when I encounter it. Despite how much the books seem taken – at least in parts – directly from “Last of the Mohicans.” Despite all that yep, I was waiting for it. Actually I was bugging Jane to find out when we'd get our advanced copy. After finishing it, I can say the wait was well worth it. 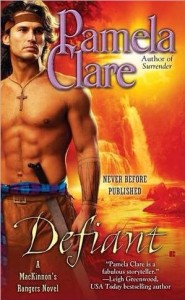 Lady Sarah Wentworth knows she has to stay on her feet and keep moving. She can't slow down the Shawnee war party nor show any fear or she'll be dead just like the rest of the people in her party whom they attacked and killed. The distant bungling presence of the British regulars who've been sent to rescue her has already caused the death of the two other people originally captured with her and she knows the warriors wouldn't hesitate to tomahawk her either. But she's not going to get dragged deeper into the vast wilderness without at least trying to leave signs for someone to follow.

Her cleverly dropped buttons and bows plus twigs in the shape of an arrow pointing their direction due serve to show Connor MacKinnon and his adopted brother Joseph where the party is headed. Tasked by Major General William Wentworth, their tormentor and Sarah's uncle, to find her, the two have been hot on the trail. Arriving at the Shawnee village ahead of the slower war party, they witness Sarah's arrival and her fearlessness in facing the gauntlet, even as they desperately try to negotiate her freedom. But the reasons behind the war party lead to a situation in which Sarah and Connor have no choice of action but that demanded by the crafty Shawnee chief after Connor defeats the warrior who would have made Sarah his bride.

But their danger increases after the three leave the village the next morning and follows them as they race towards freedom. Not only are Shawnee warriors out to avenge one of their own, but Sarah's uncle awaits them. And when he discovers what actually happened in the Indian village, being recaptured by the Shawnee might be preferable to what Wentworth has in store for them.

After reading “Untamed,”the second book in this series, way the hell back in 2008, I wondered if we'd ever get Connor's story. Weird shit happens in publishing and I've been left waiting for a finale that will probably never happen in other series before. Reluctantly I steeled myself to never find out what happens to the final MacKinnon brother or to the man who has been the instrument of their forced service to a hated King. When Jane published a post – which for the life of me I can't find now – and said you'd gotten the green light for this book, I whooped aloud. And then waited some more. And a little more… as the first two books were republished. But finally – at last! – I know how it ends.

In this post that I remember but can't locate, it was mentioned that the heroine gets abducted by Indians as part of the plot and I recall a few readers being upset about that and bemoaning the fact that the Indians would be presented as the Bad Guys. To be honest, in part they are. But I must say that in my (albeit Caucasian) POV, I think the issue is handled well and fairly balanced. There is a tragic reason behind the initial war party that takes Sarah and the others captive and from all I've read about various tribes in this area, that reason is true to historical fact. Taking captives to replace lost tribes members or taking captives to avenge the grief suffered by a tribes member were common occurrences and that's what happens here. A warrior has lost a wife and Sarah is to take her place. Once Sarah reaches the village and proves her mettle – also a common demand as the tribes didn't want to adopt weaklings – she is actually treated very well. Granted her treatment horrifies her English sensibilities but as far as the Indians were concerned, she would have been accepted.

Also, as the story progresses, Sarah and Joseph interact a lot. At one point it's up to Joseph to rebuke Sarah about some things and set her straight as to the reality of their situation. But eventually they become close friends to the point that after Sarah kills a Shawnee warrior thus saving Joseph's life, he claims her as a little sister. I also like that the (translated) names used, such as Turtle Eggs, Crow Mother and Clear Water, sound more realistic instead of the usual Brave Eagle or Morning Dew stuff we're forced to endure in books with NA/Indian characters. Your historical notes that follow the book confirmed my hunch that you used portions of the narrative of Mary Jemison as the basis of some of what happens to Sarah when she's being taken to the Shawnee village. And your choice of the Shawnee vs the Wyandot to take Sarah captive makes sense since it had to be a tribe that wouldn't immediately kill Connor and Joseph when they arrived.

The faux Brogue is once again heavily in use though the “fash level” – dinnaed or otherwise – remained surprisingly low. I seem to recall only four or five throughout the whole book. Unfortunately “Och” and “Lass” are in abundance. Well, I can't have everything…. When Sarah eventually meets most of the Rangers, they are initially cool towards her which raised my hope that we wouldn't see a repeat of the last book where the men basically fall all over themselves towards that heroine. I hoped too soon as they once again fall into starry eyed platonic love with Lady Sarah and rush to do anything for her. Ah sucks, if a bunch of handsome braw men were willing to haul hot bath water for me all the time, I'd live with it too.

The romance is part daring and part euuww. I've read a lot of books where the hero and heroine have to marry but – right off the top of my head – except for the dreaded Fated Mate type plot don't recall any where they are forced to fuck. With that bang up start to their relationship it takes a long time for things to recover as the mutual snits and naive misunderstandings they go through seemed to test Joseph's patience as much as mine. Once that was all cleared up, it's fireworks galore and the action shifts to external conflicts. Uncle William feared the worst and cautiously hopes that Sarah has come through her ordeal “virgo intacta.” More fireworks go off when he's disabused of this and here's an area that I was surprised you went to. His determination for Sarah to return to London with no hint of scandal leads him to pursue a line of action that readers might find hard to stomach – no pun intended. Once again, it's an area I don't recall reading encountering in historicals so brava to you for including it.

William Wentworth is a character I've loved to hate over the course of the series. He delights in discovering a person's weakness and then using that to manipulate said person to do what he wants. Despicable dastard would be a good description of him and in “Defiant” he doesn't disappoint. Sarah is the one person in the world he loves and when he confronts the man he thinks deliberately ruined her, Wentworth pulls out all the stops. I didn't think I could despise him any more than I already did but I discovered that I could. Not only does he take his fury out on Connor but he also ignores seasoned advice and thus sets up the dramatic finale of the book.

“How?” I cried “How will the MacKinnon brothers and the Rangers save the day and overcome all the obstacles and roadblocks that diabolical Wentworth has put in the way of true lurve?” As the tension mounts I can feel that Something is coming. Something big and awful and it's headed the way of our characters and when it hits, it will be horrific. And it is. Yet it serves as the only way to extricate Connor and Sarah's love and HEA from the multitude of things you've set up in opposition to them. It is also the making of William Wentworth. I think you excel at writing these battle sequences even if this one reminds me a touch of the massacre section of “LOTM.”

I would have been happy if the book ended shortly after this. But it doesn't. Instead it drags, lumbering along for quite a while. Frankly, I skimmed until the end. Okay, I understand that you're wrapping up the saga of the MacKinnon brothers, that the war is ending and the Rangers are being dismissed but I felt like snapping my fingers and saying, “hurry up already.” There is one redeeming bit in all this which makes me wonder if there will be a further book in this series. Any hints or confirmation would be appreciated.

“Defiant” is a pretty good entry in this series and as always I'm delighted at the use of this time period. It's so damned chock full of conflict possibilities that I'm still amazed it's not utilized more often. Most of this book works for me and I devoured it in a short amount of time. Pity about the damp squib ending. B-