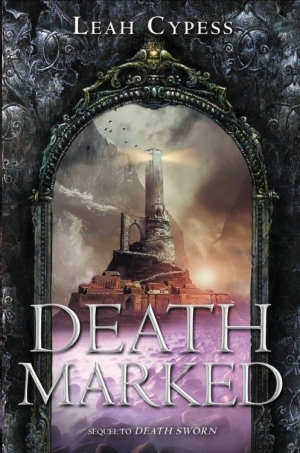 Last year, I read your novel, Death Sworn, which took some well-known fantasy tropes — assassins, mages, secret alliances, and a protagonist on a suicide mission — and put an interesting, young adult spin on them. The ending left me wanting more, particularly since it set up the possibility of learning about the Evil Empire (yet another well-worn fantasy trope). Death Marked, the follow-up and conclusion, does exactly that.

Warning: Because Death Marked is a direct continuation, there are unavoidable spoilers forDeath Sworn to follow. If you’d prefer to remain spoiler-free, here’s my review of the first book.

After leaving the assassins’ caves at the end of Death Sworn, Ileni now finds herself in the Empire, at the Academy and in the custody of Karyn, the mage who’d previously been collecting intelligence about the assassins’ caves. For obvious reasons, Karyn doesn’t trust Ileni. If you were in her position, would you? Ileni is Sorin’s — now the asassins’ leader — estranged girlfriend. To find her in the Empire is nothing short of suspicious.

As for Ileni, she came to the Empire to learn the truth. To see it with her own eyes. The Empire has been painted as evil by Ileni’s people, but they’ve been living isolated in the hills for centuries. The assassins have been living in caves for about as long. Perhaps they’re out of touch with the reality. A fair assumption, in my opinion.

But as Ileni lives among the Empire, and with the other mage students, she learns things aren’t so clear-cut. Her people and the assassins aren’t entirely wrong about the Empire. They do bad things, but it’s not black and white. It’s complicated. For example, the Empire uses human lives to fuel the power of lodestones, which in turn are used by mages since within the Empire, it’s uncommon for sorcerers to have an internal source of power. This is “bad,” but what if a dying mother offers her life for the mage’s use in exchange for the continued welfare of her newborn child? Is it still bad? Or is this more of a neutral transaction that’s embedded within their culture?

In addition, it’s easy to hate the Empire when you don’t know them and they’re a faceless horde. Karyn may not be someone Ileni will ever like, but what about her classmates at the Academy? She gets to know them as people, and they’re not so bad. When she thinks about various ways to bring about the downfall of the Empire, she also tries to think of ways to make sure they survive. That shows the evolution of her thinking and how she views the world around her.

I’m of two minds about how the relationship between Ileni and Sorin was handled. I remember wishing there’d been more exploration of the romance in Death Sworn, and now I wish there’d been more exploration of how it falls apart in Death Marked. I perfectly understood what the book was trying to do. It reminds me a bit of Blood and Chocolate, in which a girl realizes that while she may love someone, he’s completely wrong for her. Obviously, as Ileni’s perspective expands, her opinions soon become incompatible with Sorin’s. Their morals were always in conflict, but this puts further strain on their relationship.

Along those same lines, I also wanted the relationship between Ileni and Evin to explored more, too! I liked that Ileni didn’t jump at Evin, although it’s clearly implied that Evin is romantically interested her. I wasn’t expecting a romance between them, especially since the relationship — such that it was — between Ileni and Sorin was still going for the majority of the book, but a little lead-up would have been nice.

In the end, I’m left feeling much the same way about Death Marked as I did about Death Sworn. I wanted more. Especially in this book. There are so many nuances within the Empire’s culture that I wanted a deeper look. The thing about Evin’s parents being killed and his determination to keep his little brother from following in his footsteps. The relationship between twins Cyn and Lis, and the revelation of Lis’s true allegiance. The system of collecting lives from willing sacrifices.

That said, I really did like the end. It’s messy, but I am a sucker for messy, bittersweet endings. I like the idea that it’s not about big moments changing a world or ending a war or even about the special chosen one who gets to determine all that. What really matters is being someone who’s willing to put in the work even though they know change is slow and that it might only happen one person at a time. That’s a message that appeals to me, as someone who’s older than the intended audience and lives in our world and not a fantasy one.

The more I think on Death Marked, the more I like it. I appreciate what it’s trying to accomplish. I wish it could have been done with a little more nuance and depth, but we can’t have everything. B-