I loved the first and second book in this series but as the worldbuilding evolved and became bigger, I felt like I lost an understanding of the world. The book started out as a Pack book for me (Pack = werewolf) and has been transmogrified into world where every kind of magic exists from dragons to sorcerers to shapeshifters. There is earth magic, fire magic, water magic, precogs, and with each new book, a new element is introduced. The first book in the series, Tempting Danger, introduces Lily Yu and Rule Turner. (I’ve not reviewed that book here, but I did review the second, Mortal Danger). Lily Yu is a former homicide detective and a touch sensitive who was recruited to be part of the Magical Crimes Division of the FBI. Her supervisor is Ruben Brooks. 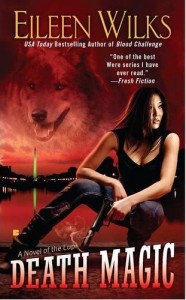 Aside: I do not recommend that any one start with this book. I think they would be lost. I was kind of lost and I’ve read all the books.  I do recommend Tempting Danger and Mortal Danger and the seventh in this series, Blood Challenge.  I think a reader could read those three and not be lost.   “Tempting Danger” and “Blood Challenge” are my favorite in this series.  Both focus strongly on the Pack and the romance between the main characters.

Rule Turner is a Lupi or werewolf and the designated heir of one of the strongest, wealthiest Packs in North America. He also wears the mantle of another pack, something that is not supposed to happen. Lupi have fated mates and Lily is Rule’s. Over the course of the series, Lily and Rule struggle with their matebond, a mystical connection that is so strong that it is affected by even distance. In “Death Magic”, Lily and Rule move ever more slowly toward an actual marriage ceremony. I’m not certain how much time has passed since book 1 of this series, but I think it is a bit more than a year.

An enemy of the Pack, an old and powerful god that the Lupi refer to as the “Great Bitch”, is rising up bringing to life old magics and dangers that have not been experienced in centuries. “Death Magic” is a continuation of this overarching plot about the “Great Bitch” and her nebulous plans. Ruben’s precog gift is foretelling something dire and it is up to Lily, Rule, and the other members of their respective clans to discover what they can do to prevent the negative outcome foreseen by Ruben. Ruben sets up a Shadow Unit, to work outside of the Bureau and by the book Lily finds herself conflicted when Ruben asks her to join. Rule is more sanguine. He’s an “end justifies the means” kind of guy and doesn’t see a problem with Lily joining Ruben in order to stop a greater evil.

Lily’s hand is forced when Ruben is accused of killing a Senator.  Tensions are further raised when the Humans First, an anti magical group, gains in power and violence.  Finally, Lily’s life is in jeopardy as she begins to experience strange illnesses that may or may not be connected to a Lupi related power she acquired in a previous book.

While Ruben, a figure that has appeared briefly in all previous books, gets more face time and an interesting storyline, I wasn’t fully engaged. I think it comes down to my own expectations for this series. It’s called World of the Lupi, but I feel that the Lupi often aren’t the focus, but the world surrounding the Lupi is. For readers looking for a broad, full and diverse urban fantasy series with some romance, I think this is very satisfying. For someone who is looking for a strong romance arc in each book, I think some of the books including “Death Magic” will be a disappointment.

The great thing about this series is the diversity. There is diversity in race and religion both on the “good” and the “bad” sides. An effort seems to be made to show each character as an individual instead of a representative token for a particular subset of society. I guess my major problem is that I expected this book to be paranormal romance and instead it is more urban fantasy. I feel emotionally distanced from these characters and would like to see more movement in the romance/relationship. It doesn’t have the visceral emotional power of my favorites but it does move the plot forward.  B-