I’ve been reading thrillers since high school. My mom introduced me to Eric Van Lustbader’s series, The Sunset Warrior Cycle, which is more fantasy/sci fi than straight up thriller, but in a search for more Lustbader I found a whole lot of Robert Ludlum in the mass-market section at my little neighborhood branch library and have been reading thrillers ever since. It was a highly round-about way to find my way to a genre that has become such a staple of my reading diet over the years. I enjoy these books for the intrigue, the heart-pounding chase and fight scenes, and the intense high brought on by racing against the clock to save something (people, the world, a city…). When Jane suggested I read Darkness and Dawn I figured it was right up my alley. 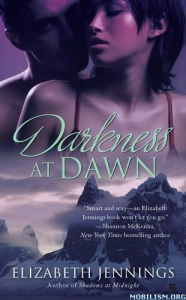 One of the best elements of Darkness at Dawn is that Dr. Lucy Merritt—our heroine and the woman who is the key to stopping the release of a world-destroying plague being manufactured by terrorists—restores rare books at the Smithsonian. Yes, it’s true, in Darkness at Dawn the CIA turns to an art historian to save the world (with a little help from an Army captain).

Lucy is no ordinary art historian. The daughter of two CIA agents who died in the line of duty and the god-daughter of the current Deputy Director of Operations at the CIA, Lucy grew up in some of the world’s most dangerous places as her parents worked to undermine terrorism around the world. Lucy blames the CIA for her traumatic childhood and has left it behind for a quiet, controlled life that includes rare books, art, and quiet evenings in her sumptuous Washington D.C. town-house. Being drawn back into CIA games of intrigue is her worst nightmare, and yet, to save her closest childhood friend, Princess Paso, Lucy agrees to return to Nhala, located in the Himalayas, using the work of restore a supposedly ancient manuscript as the cover for her real mission of locating a secret lab where the biological weapon of mass destruction is being manufactured.

An Army captain from the Tenth Mountain Division, Mike Schafer is the muscle of the mission: he is assigned to pose as Lucy’s fiancée, protect her, and do the actual investigating to find the secret WMD producing lab.

Darkness at Dawn is a thriller for readers who want to know how everyone is feeling. The tension and action are heavily intertwined with descriptions of the characters’ thoughts and emotions, and the growing attraction between the hero and heroine takes center stage in the middle of the book, despite the urgency and seriousness of their mission.

The story opens with a U.S. government operative dying by bleeding, liquefying, then turning to dust in a matter of hours (creepy, huh?); think Ebola with an extra step: the victim turns to dust. And like any good thriller the tension continues to tighten for the first third of the book while Mike and Lucy are preparing to leave for Nhala and their mission. Once Lucy and Mike are alone together—from the moment they leave for Nhala, the heavy focus on the emotional state of the characters results in a weaker spy drama and a sweet romance. The tension picks back up at the end with a fast-paced race against the clock to save both Lucy’s life and the American east coast.

From the moment he meets her, Mike underestimates Lucy. Like an intricately woven pattern, Lucy is a complex woman with rich detail and hidden depths that Mike continually discovers as they get to know each other. With each new thing he learns, Mike’s respect for Lucy and his admiration of her many talents grows. (All this learning and discovering happens over the course a week, but it’s an intense week.)

For Lucy, Mike has two things she craves but has never really had: a devoted, loving family and emotional stability. Mike takes care of her during the mission in Nhala, no matter what that means—seeing that she gets rest, taking her to a secret rendezvous with Princess Paso, or carrying her unconscious body over hostile mountains to save her from a deadly virus.

But even though Mike was the man-of-action, throughout the story it was Lucy’s quick thinking that saved them. Take this moment—General Changa is questioning Mike and Lucy about their suspicious activities:

“There was absolutely nothing Mike could do. [General] Changa would either accept the explanation or not. It was a good thing Lucy was able to think so fast on her feet. His admiration went up another notch. … Right now Mike’s main weapon was Lucy’s brain.”

After Mike and Lucy successfully evade the General, they have this conversation:

“You were so great,” Mike said, and Lucy rolled her eyes.

“No, no,” Mike actually look a little shocked at her reaction. “You were incredibly brave. You didn’t show any fear at all. You were just amazing.”

Watching Mike, the highly trained, strong, and capable Army captain, discover the depth of Lucy’s intelligence and ingenuity is the heart of their romance. Lucy got what was long overdue to her—a devoted and loving relationship; but Mike—he’s the lucky one in this story because he didn’t even know what he was missing until Dr. Lucy Merritt came along.

The story has some weaknesses that I was willing to overlook because the romance was so sweet, but they resulted in an overall weakening of the story.

I found the way Lucy slipped right back into the customs of Nhalan society and her immediate grasp of all of Princess Paso’s unspoken communications (after a dozen years with no communication) way too convenient.

Another dubious element was that the ruthless mastermind of the WMD manufacturing plot, General Changa, fell for Lucy’s every prevarication and evasion throughout the story. General Changa doesn’t come off as very smart, especially in his interactions with Lucy and Princess Paso. This offers some “Yeah! Go Lucy!” moments, but it results in a lack of respect for the villain’s capabilities; I’ve found that the thrillers I like best are those where the bad guy is formidable and the hero/heroine wins through a combination of ingenuity, better strategy, and sometimes, luck.

I’ve been calling this a light thriller, which I mean as a compliment. For instance, Robert Ludlum’s books focus first on the spy drama unfolding and deliver the necessary emotional elements to move his plots in one direction or another. Darkness at Dawn does the reverse: it focuses on the relationship between Lucy and Mike and uses the circumstances of the spy drama as tools to evolve the emotional plot. I’m planning an Elizabeth Jennings read-a-thon later this summer and see if her other books are similarly constructed, because this book made for satisfying entertainment.

Readers who want some shoot-‘em-up and occasionally tense spy drama to go with their romance and happily ever after will enjoy this book. B-.

→ Jaclyn
Previous article: REVIEW: Whistlin’ Dixie in a Nor’easter by Lisa Patton
Next Post: REVIEW: The End of Faking It by Natalie Anderson