Some of what Jenn and Mark uncover has to do with years of coercion and sexual violence by some really nasty characters. None of it is described in detail but they do find photographic evidence. 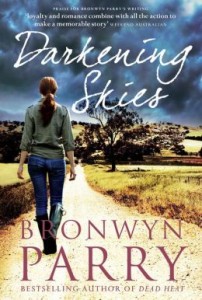 A coupon allowed me to pick up your most recent book, and I was happy for the opportunity since it was on the expensive side. The outback setting is not a common one in romance or even romantic suspense, and I was looking forward to this story.

Darkening Skies is your third novel set in the outback New South Wales town of Dungirri. It opens with Mark Strelitz, an independent Member of Parliament, discovering that he had been the driver in a fatal car accident eighteen years earlier, and that Morgan Gillespie, who had been a passenger, was framed and forced to confess to driving drunk and causing the accident. Mark suffered a head injury in the crash and has no memory of the week leading up to it. Gillespie, who had been an outcast in Dungirri, spent three years in prison before being cleared of drunk driving, while Mark, the son of a local landowning family, was able to go on with his life. He decides to do the right thing, resign from Parliament and ask the police to reopen the investigation.

Jenn Barrett’s cousin Paula was killed in the accident. After Jenn’s parents died, she spent several years living with Paula and her parents, and the two were both friends with Mark – more than friends, in Jenn’s case, although Mark has no memory of it. Following Paula’s death, the seventeen year old Jenn left Dungirri and her abusive uncle behind and went on to become a successful journalist, covering various international stories. However, in the aftermath of Mark’s confession, her uncle asks her to return to Dungirri, since the family is shattered by the revelations and other recent events.

Some of the background to the story refers to things that happened in your previous Dungirri-set book, Dark Country. But although I didn’t really remember the details of Dark Country all that well, I didn’t feel lost, and the necessary information was conveyed without resorting to info-dumping.

It soon becomes clear that there was more to the accident and the subsequent cover-up than was first apparent. Mark’s home is broken into and set on fire, two men who might have knowledge of the investigation are murdered, and Jenn’s old colleagues at the regional newspaper where she’d worked as a teenager seem to know more than they are willing to divulge. They are clearly scared about Jenn digging further – with good reason, as it turns out. As Jenn and Mark work together to find what had happened eighteen years earlier and what other secrets might be buried further in the past, their old feelings for each other grow stronger.

My impression is that your books lean more toward the suspense part of romantic suspense, and this was again the case here. This part of the story works well, and I appreciated that it involves ordinary people and not any larger than life characters as sometimes happens in this genre. While my bio notes that I’m not a fan of small-town romances, this mostly has to do with how idealized small towns often are. Dungirri is not; there are good things about it, such as the sense of community, but also darker aspects. Actually, there has been so much crime in Dungirri that I wondered at times why any residents would want to remain there. I hope that the happy ending will extend to the rest of the town.

The romance in Darkening Skies is pretty much a secondary part of the book. Jenn and Mark both acknowledge that they are attracted to and have feelings for each other, but Mark’s life is in Dungirri, while Jenn’s life and career are elsewhere, and neither is interested in a casual hookup. In addition, Jenn’s childhood losses have left her wary of commitment and intimacy, and she is cautious in how she approaches relationships. So while Jenn and Mark are together constantly, they don’t act on their attraction until the very end of the book, and the focus is almost entirely on the investigation and its repercussions.

Mark is a really good guy. Romantic suspense heroes are often alpha types, but Mark’s strength lies in his compassion for others, his honor and his ability to solve problems and help people and to be a leader when one is needed. The problem for me was that he was so nice, kind and caring that he seemed too good to be true. I wish he could have been a bit more flawed, and I think it would have been more realistic.

Overall, Darkening Skies held my interest and it was different from what I usually come across when reading romantic suspense. On the other hand, I would have liked to see more interaction between Jenn and Mark that wasn’t directly related to the investigation, and to have their relationship explored to a greater extent. I’m not necessarily opposed to romantic suspense novels that emphasize one aspect more strongly than the other, but in this case it went a bit too far for me. B-