I will admit to having lost touch with your Nightcreatures series. Silly me thought that you’d switched over to your Phoenix Chronicles and hadn’t been checking your website lately. Seems like I’ve missed not just one but two books in the process. Well, I’m back in the saddle with “Crave the Moon.” 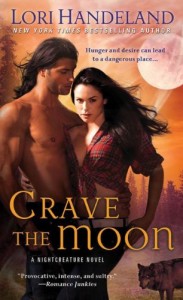 Gina O’Neill has been trying to hang onto the Colorado ranch she inherited when her parents died trying to save her and her childhood friend Jase from a cave in that happened at a site on the ranch which has always been said to be cursed. Sometimes Gina would swear that she hears someone or something calling her name on the wind and still feels drawn back to the location of the accident. It’s a photo she takes of a bizarre tree in the area which leads Dr. Matteo Mecate, an archeologist trying to prove his deceased mother’s ridiculed Aztec theories to be true, to write Gina asking for permission to dig at the site. When he gets no response from her after repeated attempts to contact her, Matt heads to Colorado and, on the spur of the moment, passes himself off as another client at the dude ranch while he tries to discover the location where he thinks an Aztec superwarrior might have been buried centuries ago.

There is instant chemistry between Matt and Gina which of course gets ruined when Gina finds out Matt has been lying to her about who he is and why he’s there. It goes from bad to worse after independently wealthy Matt buys the ranch from the slimeball who bought Gina’s mortgage from the bank. Then things get worser still when the eons old creature buried and contained all those years ago finally gets out. Will anyone survive long enough to fall in love or is the world doomed if Gina and Matt can’t come up with a way to save the day?

I love that Matt is sort of geeky and has to have glasses or everything’s a blur – wow can I relate to that. He’s not media reference savvy but he’s got a hot bod. He’s also got that professorial habit of drifting off in his mind as he contemplates great things. Gina is nice, direct, no nonsense – what I’d expect a woman raised on a working western ranch to be. She leaves the flirty girly stuff to others. Gina does some token resistance of the feelings she has for Matt and he manages a half hearted effort but they’re pretty much like magnet and steel – maybe not quite a fated mate romance but darn close. I guess with all the other paranormal stuff to fit into the book this is the only way to do it. But do they have to do the “inappropriately timed fucky fucky” not just once but twice?! I’m thinking – werewolves all around, knowledge that the Nahual “master of all Aztec evil” can strike anywhere and these two cloud their mental “here and now” with bedsport? Time and Place people!

After ten books you’ve still maintained an inventive use of historical fact mixed with local legends and myths -this time Aztecs x Utes – plus a heaping dollop of imagination. Some parts of the basis of this book seem real – such as the willing Aztec sacrifice getting a year of goodies, while the trip north of the Aztecs to war against the Utes for sacrificial warriors is stretching it. But it is fun to read about and shows you put some time into at least trying to come up with something that sounds pseudo realistic. And then as the Nahual says to Matt – prove that this is wrong. Since in RL we are guessing/unsure about so much of Aztec life – anything could go. I love the way that Gina actually saves Matt when she fights the Nahual – [spoiler] it combines something of her fleeting thoughts as a human but much more of what she would feel as a werewolf – the Nahual is messing with the human she wants and by damn no one is going to take her prey. [/spoiler]

This is a paranormal and I know I should just let go and free fall into it but some things still bother me. I agree with Gina that two sorcerers are one too many. Then there’s the part about certain people having a damn good idea of the extent of the evil locked up in this little corner of Colorado and not much being done beyond spreading rumors of something evil there to try and keep people away. Then things really go downhill as the voodoo priestess gets involved. And are they just going to leave the Nahual like he was before? They know that doesn’t always work. Plus I have some unanswered questions – why did the Nahual bite Amberleigh and not get everyone else too? If horses are spooked by werewolves, why didn’t they bolt from the barn the first night? Also how much longer is Edward Mandenauer going to still be around. The guy must be pushing the upper 80s by now. But he’s still got his network of minions and seemingly endless supply of weapons and cool stuff to use in the battle against monsters. I want minions!

Like a newly turned werewolf craving human blood, I find I’m still helpless to resist these books. Weak! I’m weak I tell you. The title might be “Crave the Moon” but I crave the Nightcreatures. B-