Within a relatively short time, your books have become auto-buys for me. They provide the emotional angst and alpha hero Harlequin Presents are famous for, but it seems you are always trying to do something interesting with your heroines, pushing them well beyond the “doormat” designation some associate with the line. Your books often follow the intersecting paths of two complex, independent people with no immediate plans to fall in love and any number of defenses to emotional vulnerability. And despite the innocuous, almost misleading title, Cracking the Dating Code is no exception. 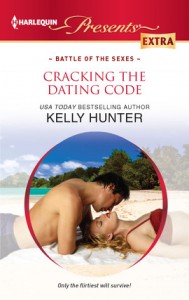 Poppy West is a cryptologist who is just as talented as cracking code as creating it, a skill that she hopes will be put to good use on her missing brother’s secret government file. Poppy’s other brother, Damon, a master hacker, found the file in a previous book, but they need Poppy to decode it, and she needs somewhere completely off the grid to undertake that task. Fortunately, her business partner, Tomas, also has a brother, who, in turn, owns a remote Australian island equipped with exactly the kind of equipment and isolation Poppy needs to pull off her mission.

Sebastian Reyne has a successful offshore oil-rig maintenance business, but he’s still reeling from the explosion that killed one of his partners and left a rig worker deaf. And he’s not exactly in the mood for company when Ophelia West shows up. In any case, he was expecting “a little grey mouse with an IQ several sizes too big for her,” and instead his hungover brain tries to process a quiet woman “with flawless, creamy coloured skin, hair the colour of toffee streaked with sunshine and a lithe, willowy body he had no business noticing.” But of course he notices.

On the surface, Cracking the Dating Code is a classic story of the brooding, traumatized male and the quiet, but emotionally solid, virgin heroine. But the fun of Hunter’s books is that they never just skim that surface. Here, Sebastian is a bit of a loner, a marine engineer who has built a successful business that fits his somewhat idiosyncratic personality, which includes a strong sense of responsibility for the people who work with and for him. Poppy, though, is even more interesting. A mathematical genius, she is uncomfortable in most social situations, but not so much because she’s ill-equipped to deal with people; she’s just more focused on quiet pursuits. However, being labeled an outcast in school has left her a little insecure about the way other people perceive her, and her intense work does not do much to quash that stereotype. She also has a fear of the water, which is somewhat inconvenient, given that she’s going to be spending some serious time on an isolated island with a man who thinks nothing of diving or snorkeling or boarding.

Because Sebastian and Poppy are alone together on the island, their relationship proceeds almost by necessity. Sebastian is initially reluctant to see Poppy in a sexual way (he doesn’t want to interfere if his brother is interested in her), and Poppy is too focused on cracking her brother’s file and too inexperienced with beautiful men to pick up on Sebastian’s attraction to her.

However, their isolation and proximity to one another allows for an uneasy friendship to develop, which leads to Poppy’s embarrassing (to her) admission that she doesn’t know how to flirt with men. So just to pass the time, Sebastian challenges her to a game of billiards and decides to give her a casual lesson in flirting. He tells her to pretend she’s meeting him for the first time in a bar:

‘…I’m asking you what you’re drinking and whether you’d like another.’

‘I’d like a mineral water this time, with a slice of lime.’

‘You realise the addition of lime pegs you as high maintenance?’

‘Then it’ll come as a pleasant surprise to you later on. The lime stays.’

‘Maybe you like that. I can see a wayward woman appealing more to you than a mousy one. I’m all for ditching my current mousy image.’

‘Really?’ He stared pointedly at her light blue short-sleeved T-shirt and slimline grey trousers. ‘What are you wearing?’

‘An outfit I got for Christmas. A baby-doll black dress and a bone-coloured shortish trench coat over the top of it. It’s the sexiest outfit I own.’

‘A trench coat is the sexiest outfit you own,’ he echoed with a glum shake of his head. ‘That’s just sad.’

It’s clear where all this is leading, although the ride was much more pleasurable than I expected given the set up. A lot of my enjoyment is grounded in the wonderful dialogue between Sebastian and Poppy. It’s witty but not too cutesy, and it works to unveil the characters, both to one another and to the reader. And because Sebastian is somewhat of a loner and Poppy an introvert, the conversation is a perfect way to develop levels of intimacy beyond the physical.

Speaking of physical intimacy, one of my favorite things about Cracking The Dating Code is the way it treats Poppy’s virginity. Poppy is not missish, but neither is she brazen. When it’s clear that she and Sebastian are on the verge of sex, she balks, unused to merely going with the emotional and physical flow:

There’d been the meal, which she’d thanked him for.

The billiards game, which she’d been losing.

The flirting, at which she’d been hopeless.

And then there’d been the kiss.

Yep, the root cause of the problem had been the kiss. She’d been completely enmeshed in it, sensory overload.

And then he’d pulled her closer and she’d felt his arousal and the enormity of what she was doing— of where Sebastian’s greedy, knowing mouth was leading her— had crashed down on her. She’d wanted to be ready for more but she hadn’t been.

Inexperience had rendered her motionless. Speechless.

But not unwilling. He’d read her wrong if he’d read her that way. She just hadn’t known how vividly arousing close body contact could be.

And now she did.

It seems perfectly reasonable that she would be hesitant, especially since she barely knows Sebastian and is not used to being so emotionally of physically swept away.

In fact, in some ways, Sebastian seems to have more hang ups about Poppy’s virginity than she does, and it is interesting to see how they challenge each other in bed, deepening their connection because the sex is tied so closely to their sense of discovery about one another. Also, the sensuality is very strongly communicated in only a few sex scenes, in part because Hunter does a very good job connecting her characters’ sexual satisfaction to their sense of emotional closeness. I’ve gotten pretty jaded and bored with a lot of the genre’s sexual elements, but Hunter’s erotic scenes substantively added to the story and the characters’ romantic journey.

The journey itself is relatively quiet. Sebastian is thoughtful, dry in his humor, and serious about his work. Neither he nor Poppy is particularly volatile, and most of what maintains the early tension in their relationship is Sebastian’s unwillingness to potentially infringe if his brother has feelings for Poppy and Poppy’s uncertainty about what she really wants from Sebastian. Both are incredibly independent and self-reliant, although they are also lonely in ways that they don’t completely recognize in themselves because they are so used to being in control of their own domain.

The quietness of the book is one of the things I really liked, but the downside is that once the novel introduces a potential source of conflict for the couple – can they fit into each other’s worlds – it felt a little forced to me. Without giving it away, I will say that the questions arise around whether Poppy can thrive among the people Sebastian works with, who are quite a close-knit band, because of the intensity of the work they do and the extent to which they need to trust one another to keep the offshore rigs they maintain safe.

Also, perhaps because I liked Poppy so much, Sebastian felt less interesting as a character. Not that he was uninteresting – and I was grateful that he was not portrayed as merely another dissolute, self-destructive alpha male. It’s just that Poppy’s character had more unusual dimensions to me. I loved the way her quietness had become a source of social discomfort, but only because of the way other people perceived and treated her, not because she was unhappy with her life or who she was. That Sebastian understands and respects this is nice, because it keeps things from getting overdramatic. It also means that the question of their HEA becomes dependent on whether they can manage within the context of the outside world.

In all Cracking the Dating Code is a nice low-key book with an interesting challenge to the stereotype of the geeky virgin heroine. It’s not my favorite Hunter book, but it’s a respectable entry in her new West family series, and a solid read B-

→ Janet
Previous article: What Jayne’s Been Reading and Watching Recently
Next Post: Wednesday News: Fake views targeted by Google; Apps for your new tablets; a radical solution for global warming