REVIEW: Count on Me (Petal, Georgia series) by Lauren Dane

KatiB- Reviewsattorney / Contemporary / Small-TownComments Off on REVIEW: Count on Me (Petal, Georgia series) by Lauren Dane 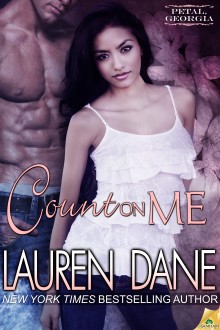 Your Petal, Georgia series is a favorite of mine. I like small town romances when done well, and this one ties in to the Chase brothers series, which I also enjoyed. Carolina Mendoza is back in Petal sixteen years after the brutal murder of her mother and subsequent conviction of her father, who she believes to have been wrongly convicted. She’s there for two reasons, first, she wants a stronger relationship with her two younger siblings, who her mother’s well-to-do parents took custody of after her mother’s death, and she wants to clear her father’s name. Her dad died in prison, all the while proclaiming his innocence. Her siblings are much younger than her and have no real memories of their parents, as well as being influenced by their grandparents who believe with all of their hearts that Caroline’s father committed the crime.

While grocery shopping one day, Caroline reconnects with Royal Watson. Caroline and Royal went to school together although never knew each other particularly well. Royal is immediately attracted to Caroline and begins what I’d describe as a full-on charm offensive. Caroline is a little wary. She’s not looking for love, and while she’s definitely attracted to the big, handsome farmer, she’s not in Petal for that, and is reluctant to get involved with a man. In the end she agrees to dinner and finds herself rethinking her “no love” stance. Royal is funny and charming and a true southern gentleman. But Royal has an ex, Anne, who doesn’t want a relationship with Royal, but also doesn’t want him with anyone else. She’s snotty to Caroline and continues to be as Royal and Caroline begin to build a foundation for a long-term relationship. On top of that, Caroline is trying her best to rebuild a relationship both with her siblings, and her grandparents, who she left when she was a young teenager to go live with her father’s family. There’s a lot going on for her.

As word gets out that she’s trying to clear her father’s name, she find animosity directed at her from her grandparents, various town folk, and her sister’s boyfriend, who accosts her on numerous occasions. Soon, that animosity has raised to threats. Someone slashes her tires, someone shoots at her through an open office window. And as the violence escalates, Caroline and Royal must come together to keep her safe.

There are a lot of things I like about this book. I would describe Royal as a more Beta hero, which is unusual for you. He’s protective and certainly adores Caroline, but he’s not a guns ablazin’ kind of hero. He’s content to let her kick a little ass herself. Certainly, when it becomes apparent that Caroline’s life is in danger, he does go into protective mode, but he admires her smarts and strength too much to curtail it. He’s also a real southern charmer hero, which I’m a sucker for. He’s a gentleman, a tiger in the sack, and has really wonderful manners.

For her part, Caroline is strong and really intelligent. She’s got real spine without being off-putting, and there is one scene where she and Anne finally have a confrontation over Anne’s pursuit of Royal. It’s not a cat-fight by any means, but it’s a no bullshit, serious conversation. You know, the kind two grown women would have. One of the things I’ve always appreciated about your work is that your heroines are never doormats. They don’t whine, they don’t cry. They show initiative, and they handle their business. Caroline is no exception, and it immediately makes her someone who I would want to be friends with.

Where I think the story falls down a bit is clearing the father’s name. You spend about the first 2/3 of the book building the relationship between Caroline and Royal. Then the danger part of the story comes in and it all felt a bit rushed, particularly the resolution of the story. To me, there was no foundation for the killer laid, so he came out of left field and I just didn’t buy it. I wanted more of a build up, I guess.

In the end, Count on Me is a really lovely romance, featuring a to die for hero and a smart heroine who I liked very much. While the mystery/suspense part didn’t work for me as well as I would have liked, I know that Count on Me will be a book I’ll reread. Final grade: B-