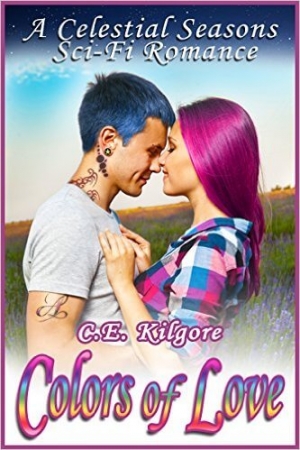 Kyle’s never been one for conformity. He loves color. He loves being himself. And, he’s in love with Amber. After three months of serious dating, he thinks he has a brilliant plan to take their relationship to the next level. All he needs is a little ink, some nerve, and a cake with magenta frosting.

After crash-landing on Earth, Amber thought she’d never find love. Now, Amber’s whole world is turning magenta, and it’s not a good thing. It’s also supposed to be impossible. Despite Kyle being human, her own Cleodyte biology has initiated the Oosan – a biochemical reaction that could tether them together permanently. She knows Kyle loves both his freedom and the idea of having kids some day – two things he’d have to give up if she allows the Oosan to continue.

Then there’s the whole ‘growing old before he does’ issue… As if her life wasn’t complicated enough, now her hair has turned traitor, and magenta. She loves him, so perhaps it would be best to let him go. Kyle, however, won’t let her go so easy. He’s seeing magenta, too. And to him, it’s just one of the many colors of love.

Ever since I was snagged by the first books in this series,I’ve been coming back for more. It might take me a little while to get to them but I do buy them hot off the e-press. I’ve been looking forward to this one since Kyle has been a favorite character from the start. Amber’s color changing skin is fun to think about and I chuckled when two of her shipmates describe her to Kyle in terms of a particular earth animal.

Kyle is an easygoing guy – based on what’s always said in books about the place, he’s a Portland person who rolls with it and enjoys the openness of the place. He’s also ready to take his relationship with Amber to the next level and maybe further depending on how she reacted to his proposal. He’s doing the “guy baby steps” thing. Gotta love a man who spends incredible amounts of time getting the frosting color just right on his “Will you move in with me?” cake.

I’m loving the Cleodyte differences, even though Ambrisa dreads reaching her second puberty when she’ll suddenly go from looking an eternal 20 straight to 50. Which is still better than the dead she’ll be not all that long later since Cleodyte’s don’t live that long. Amber’s hesitation about moving the relationship into something permanent has a big ol’ major reason. Once she chemically bonds with her mate, that’s it. He and she are bonded for life and even kissing another would make them sick. And since her lifespan will probably be shorter than his … well, it’s hard for her to commit ‘cause if the biochemical tethering is done with the wrong person, it’s some bad shit. This is a time when being a self-sacrificing Noble Martyr actually makes sense. Kyle, however, will have none of it. Go Kyle!

It’s nice that Earth isn’t some wonderful Most Specialist Place in the Universe. Instead it’s just where their space ship crash landed and almost at the back of beyond as far as they’re concerned. Intersellar Bumfuck. Instead the crew laments that humans have promise but just aren’t there yet. “Sigh … “ But our DNA is flexible!

The backstory conveyance is a touch heavy handed but given the short story length, I can see the need. There are some editing thingies. An for and. Is for his. A missing word here or there. Since this isn’t an arc, I’m going to deduct for that.

Kyle and Amber are just so cute together, so perfect with their shared love of color, even if Kyle’s might be dye induced rather than Amber’s natural magenta/orange/green/blue/speckled yellow/pink. The past characters all have a place in getting Kyle and Amber to their HEA. It’s also fun to listen in on Garry and Steve’s exasperated conversation about Amber’s developing bonding crisis when they think Kyle knows what the heck they’re talking about. Talk about confusion all around … Thank goodness for Kyle that Garry thinks of describing Amber as like an emotionally driven cuttlefish.

The “yes, we love each other and we’re finally going to admit it” scene is sweet and Kyle’s answer to Amber’s worry about children is so totally him and wonderful. I kinda wish that the end hadn’t turned into “alien for you” and that Kyle and Amber had to work a bit more on the compatibility but, hey the story is short and you only had so many pages to wrap this puppy up.

So another space alien paired off to a HEA with a human and one more book to go with another seemingly unsolvable conflict. I can’t wait. B-