The first novel of your Spiritwalker trilogy, Cold Magic, was my favorite read of 2010. To say that I’ve been eagerly anticipating the sequel might be an understatement. I had a few mishaps in obtaining a review copy but thanks to Jane’s heroic efforts, I received one last week and I devoured it. 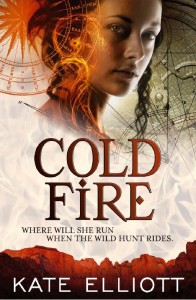 As a quick introduction for new readers, the world of the Spiritwalker trilogy is an alternate Earth that never was. Many things are different, the main one being that colonialization didn’t happen as it did in our world and explorers did not “discover” lands that were already inhabited.

Three other traits govern this world. First, the Phoenicians fought the Romans to a standstill so the Roman Empire did not expand as far as it did in ours. Next, a salt plague drove the West African Empire of Mali across the Mediterranean into Europe where they mingled with Celtic tribes, giving rise to an Afro-Celtic culture. And finally, the ice shelf did not recede far enough so the northern climates are extremely cold and the magic system of Europe is ice-based. This means that the cold mages and their Houses, along with the tribal princes, are the ruling classes in Europe and believe that is the natural order of things. They have no desire for this newfangled steam technology to upset the balance..

Cold Fire picks up where Cold Magic left off. In fact, it overlaps. The first chapter of the book covers some of the ending events of the previous novel. This threw me off at first and I kept checking to make sure I wasn’t experiencing some strange literary form of deja vu but yes, they definitely overlap. In fact, a significant amount of it felt like a rehash. This isn’t my favorite narrative choice so my eagerness came crashing back down to earth and I proceeded with more reserve than I think I would have otherwise.

Thankfully, that’s only happens with the first chapter and the story continues with new plot immediately after. After the events of Cold Magic, orphan Catherine Hassi Barahal has learned everything she ever knew was a lie. The man she thought was her father was not and in fact, no one knows the identity of the man who sired her. This means she is not actually a Hassi Barahal and the only reason her aunt and uncle took her in was to serve as a substitute their eldest daughter, Beatrice, to fulfill an undesirable contract with a Mage House. At the end of Cold Magic, Cat left her new husband, Andevai, and went off with Bee and her shapeshifting brother, Rory.

Now Cat has multiple issues to face. The infamous general, Camjiata, has escaped and is gathering power in another attempt to wrest control from the Mage Houses and tribal princes. To do so, he’d like to gain the trust of Bee, who is a dreamseer, and Cat, whose mother was one of his most trusted Amazons. Because Camjiata was married to a dreamseer himself, he was privy to many visions and believes that a choice Cat makes will determine the course of the war he wishes to make.

After her aunt and uncle’s betrayal and Four Moons house’s determined pursuit, Cat and Bee have no desire to become pawns again. But in their quest to avoid the forces seeking to capture and control them, Cat, Bee and Rory end up separated. Worse, Cat finds herself halfway across the world in Terra Nova where she gets involved in a revolution.

A lot happens in this book. A lot. So many plots and storylines were going on that at times, I found it overwhelming. It was never slow and while I normally like that, I think the multitude of narratives detracted from the emotional aspects. I like messy emotions in my readings, almost to the point of melodrama, so the nuances I enjoyed in Cold Magic seemed to be lacking here.

There was the revolution storyline. The thing between Cat, Bee, and Camjiata. Cat and Andevai. Cat and the fire mage. Cat and her father. The enmity between the fae and the dragons. I like intricate plotting and multiple subplots but I honestly felt like the various storylines were scattered and unfocused. Maybe if the book had been longer (I know, I know), I wouldn’t feel that way. Multiple storylines are a staple of epic fantasy, after all.

While I appreciated the sidestep around the potential love triangle — like many readers, I’m so over love triangles — the storyline involving Cat, Andevai, and the fire mage left a bad taste in my mouth. I have no issues with the set-up. In a similar situation, I think many people would make the choice Cat did. I can understand why some readers would have an issue with it, but it made sense to me. It was a pragmatic decision made in an unfamiliar situation. I’m also glad we didn’t get any scenes in which Andevai castigates Cat for making that choice. All of his ire was directed towards the fire mage, as it should have been because the fire mage was an asshole of the highest caliber.

What made me frown, however, was everything that followed. I’ll try to keep it vague to avoid spoilers, but everything that went down between Cat and the fire mage was related to Andevai in some way. In the end, it wasn’t really about Cat at all. She was just the tool. I like that Cat is allowed to make mistakes, but I can’t help but feel dissatisfied about this. She was the one who was lied to; she was the one taken advantage of. She’s the protagonist, but the focus is really on Andevai and his feelings?

In some ways, I felt that the sole purpose of the fire mage was to contrast against Andevai and show readers that Look! He’s not actually that bad! This other guy’s much worse! I know forced marriage tropes can be skeevy if executed poorly, but I’m not convinced the introduction of the fire mage character was necessary to alleviate the problematic elements of the trope in the trilogy. I honestly thought Cat, Andevai and their efforts, both combined and individual, were enough to counterbalance that.

Some of this is personal preference, of course. In Cold Magic, I got a story about two cousins being awesome. I had hoped that Cold Fire would continue that. Instead, I got a story in which two cousins were being used and manipulated by men. Cat and Bee do a good job trying to circumvent and counter those efforts but still, it was disappointing. More so because I was teased by the promise of them going on adventures together, only to be separated. Again.

I did like bits involving Cat’s father. His inhuman nature was fairly obvious already, given hints from the previous book as well as the fact that her brother’s true form is that of a sabretooth tiger, but the actual identity was interesting. I found their first meeting interesting and his introduction to be rather creepy. I also thought the handling of Cat’s being bound to his will pretty clever and I admit it took me longer than it should have to notice that she was answering all questions with more questions.

Despite the fact that the main storyline was purported to be Cat’s attempts to circumvent Bee becoming the target of the next Wild Hunt, I didn’t find that to be the case at all. I thought the revolution storyline made up the main plot and in some ways, that was part of what weakened the story for me because here Cat is tasked with this one thing but all these other things keep taking her attention. I can’t say if that was the intention. The cover copy implies one thing, but it very well may have been the other.

Not that this isn’t realistic — people can’t just focus on one thing to the exclusion of everything else — but it made for a very scattered, overwhelming book. I was a little disappointed to see that despite their best efforts to avoid it, Cat and Bee were still being tossed around by the machinations of other people. Cat was used. Bee was used. I can’t help but feel this is a step backwards from the previous novel. That said, I do like where Cat and Andevai’s relationship ended up and what I hope to be the focus on the next book. B-