REVIEW: Chase Me by Tessa Bailey 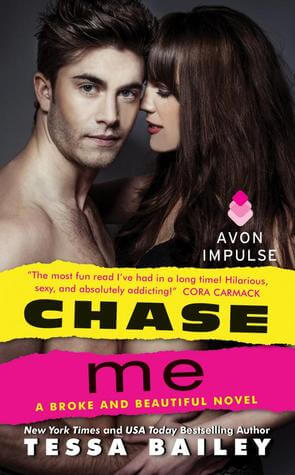 I saw some twitter discussion from readers who had obtained an ARC and then Mandi from SmexyBooks emailed me that I needed to get a copy of this book.

Roxy Cumberland is a college drop out from New Jersey who is in New York pursuing her dream of becoming an actress. She just got kicked out of her apartment for not paying her rent and is down to her last few dollars. In order to feed herself, she agrees to perform singing telegrams. Dressed in a giant pink bunny costume, she shows up at Louis McNally’s posh apartment to sing a song to his dick, penned by his latest conquest.

Louis is coming off a night of celebration, can barely remember the name of the girl whose night he made so fantastic that she sent a giant bunny to his door. But there’s something about the voice behind the mask that gets his blood pumping and he starts flirting with Roxy. Roxy thinks he’s hot, but a jerk and in a literal kiss off, she raises her mask, lays on a bone melting kiss and takes off.

Louis can’t stop thinking about Roxy and ends up having to ask the girl he slept with for the name of the singing telegram company in order to meet her again. Louis steps in it time and again in his pursuit of Roxy. Despite the initial manwhore behavior by Louis, he is really a nice guy. He’s a successful lawyer who loves doing pro bono work. His work contract is up and he wants to do more pro bono work but his firm isn’t interested in that. The misguided things he does for Roxy are sweet.

Louis has twin sisters and they are scene stealers but the scenes with the twins are a great way to portray Louis as a great guy rather than the one who can’t remember the name of the girl he banged the night before. (In fact, the portrayal of Louis makes the opening scene feel the exception to Louis’ character). His bumbling makes him endearing.

Roxy is a hard working actress and despite the fact that she’s been reduced to signing telegrams and maybe worse to feed herself she doesn’t give up on the dream. I admit that I’m far more pragmatic than Roxy but I admired her tenacity and I felt bad for her when her most recent success appears to be tainted.

Parts of the story are very predictable. For instance, Louis makes a phone call to an old classmate of his that is now a producer and magically Roxy gets a request to read for the part. That particular subplot as it relates to the Louis and Roxy conflict was one I’d read before but even with the predictable storylines, the humor and genuine likeability of the characters has you keep turning the pages.

I found the story cute, sexy (although not as sexy as her mainstream adult books) but the ending was very abrupt. There’s no real resolution to Roxy’s predicament. How is she going to earn money to live, for example? Louis situation with his legal career is also a bit unsettled. I didn’t get a full sense of the HFN for these two.

I wrote to Mandi that I guessed we would get the epilogue played out in the other two books in the series. Conveniently Roxy ends up with two female roommates and Louis has two male best friends and we’ll be reading about those pairings next. B-