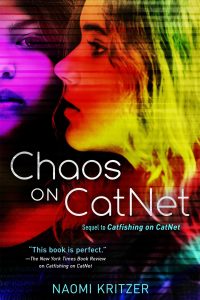 When a mysterious entity starts hacking into social networks and chat rooms to instigate paranoia and violence in the real world, it’s up to Steph and her new friend, Nell, to find a way to stop it—with the help of their benevolent A.I. friend, CheshireCat.

There will be spoilers for the first book in this review.

I am obviously like Pavlov’s dogs when I see “cat” on a cover. That’s what got me to read “Catfishing on Catnet,” the first book in the series. It’s a good thing I went ahead and finished it before starting this book or things would have not made sense to me despite this book having some explanations of that plot.

Now Steph and her mom are finally a bit settled in Minneapolis, with an apartment, Steph’s cat, and Steph has been enrolled in (yet another) high school. But this time the school officials actually know who she is and why her transcripts are such a mess. On her first day, Steph meets Nell and from the look on her face and the way she’s acting, Steph knows that Nell is more anxious and messed up than she is – which is saying something given how Steph has been raised. The school sort of pushes the “new girls” together and starts to help them get adjusted.

After Nell finally relaxes enough to spill her life story, Steph realizes that some people have had lives almost as fucked up as hers has been. Nell is now living with her father and her father’s second wife along with that wife’s girlfriend and the father’s girlfriend. Yep, that’s four adults in the house. This is the polar opposite of where Nell was living with her mother and involved in what is obviously a religious cult of whack jobs. But mom disappeared and now Nell’s living with (who she’s been taught are) the sinners.

Both Nell and Steph are persuaded to download a games app to their phones that sends people on weird and random tasks that initially seem like just fun. Nell tells Steph that it’s kind of like another online game she has that a lot of the religious people are on. Steph’s CatNet clowder, who came through so spectacularly for her earlier, are also reporting joining the same app or similar ones. Everyone seems psyched to be accepted in them as these are teens who have been shut out or shunned by their peers as many are LGBTQIA.

Meanwhile ChesireCat, the sentient AI cat picture loving mod of CatNet, tells Steph that they’ve been contacted by an anonymous texter who implies knowledge of who and what ChesireCat is. Soon Steph is wondering whether she’s still getting over having felt paranoid all her life or if she needs to start worrying again.

It took a short time – too short – to dive right into what ChesireCat confides to Steph that they think the messenger is. It all seems way too convenient. “Oh, I think it might be this and we need to start a search through the whole of the Internet to see if I’m right.” A day later – “Could this be what you’re looking for?” “Why yes, I believe it is!”

But to be fair as the book continues, lots of tensions get heightened, and then get ratcheted up even more. There are dangerous people aplenty but dangerous in a creepy, smiling way rather than outright gonzo. This makes it easier for Steph to shrug some things off and have to think about whether this is actually normal (as she’s never really known normal) or if someone really is after her. The religious cult Nell’s mother is a member of is as horrible and controlling as such cults usually are and damned and determined that they will be ready when the world goes up in flames before welcoming Jesus back – so yes eventually there are explosions.

Given Steph’s background, some dots took way too long to be connected. I know she wants to be living a sane and rational life now that she feels she isn’t in the danger she was in before but when someone who’s lived waiting for the next time she has to flee and always on alert gets feelings that maybe things aren’t right, perhaps she should listen to those feelings before things go BOOM.

Unlike the first book, some adults are clueless but others will jump in when needed and are actually necessary to save the day. Steph’s grandmother’s driving skills are awesome. Still since this is YA focused, they’re the main ones along with ChesireCat who are running things. It’s sad when a sixteen year old has to lead a car full of adults out of a riot with the words “I’ve trained for this.”

Yes, there are some things I didn’t like and some plot holes that … okay, weren’t too bad. Steph’s real cat gets ignored a bit too much for my liking because … cat. I liked the vision of near future Minneapolis and the quiet tribute paid to George Floyd. The book ends with our humans doing better and hopefully lots of cat pictures and flowers. B-