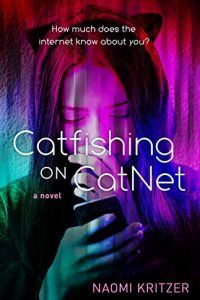 Because her mom is always on the move, Steph hasn’t lived anyplace longer than six months. Her only constant is an online community called CatNet—a social media site where users upload cat pictures—a place she knows she is welcome. What Steph doesn’t know is that the admin of the site, CheshireCat, is a sentient A.I.

When a threat from Steph’s past catches up to her and ChesireCat’s existence is discovered by outsiders, it’s up to Steph and her friends, both online and IRL, to save her.

After seeing and reading what I think was the inspiration for this novel, your short story “Cat Pictures Please,” (available to read for free at Clarksworld) I decided to read this. There is stuff I liked, stuff that confused me, plot holes, things that wouldn’t happen in real life, and an ending that sets up the next book which, by the end of this one, I immediately went and signed up to read it. ChesireCat feels like a friend and I have to know what’s going to happen to them.

This is kind of like two stories that ultimately get jammed together and took until the 60% mark to finally come together. What happens early on is the set up of Steph’s life so far – living with her mother, being on the run, making no ties with anyone or any place. Her mom finally broke down and told Steph their movements are because her father is dangerous and once tried to kill them. Steph knows that her mother earns money through coding but not much else. Her mother also seems to have issues with depression at times.

The book then shifts to “A day in the life of Steph at her new school” Yes, it does set up her new friendship with Rachel but it still dragged. As Rachel probably saves Steph’s life not once but twice, I ended up seeing why watching the bond form between them is as important as it is. The precariousness of Steph’s situation, foreshadowed by having Steph worry about what might happen to her if something happened to her mother, of course comes true. With no adult she trusts to help her, Steph turns to her online clowder.

Yes, a clowder is a group of cats but in this case it’s a group of friends she’s made through going online to a site – CatNet – where people post pictures of (preferably) cats though other cute animals will suffice. The site funnels users into groups based on algorithms and Steph’s group consists of teens who feel they don’t fit in. For most of them, this is due to their gender identification or sexual orientation though for Steph (at the start of the book) it’s because of her frequent moves. This allows for a lot of diversity inclusion. One “person” even the clowder doesn’t know is included is ChesireCat – the moderator (actually the only mod at the site though they use multiple sign-ons to hide it) and an actual AI.

The true nature of ChesireCat is revealed to the reader early in the story and removes what could have been a nice amount of tension later in the book. Since Steph has been posting and chatting with these people for a while and since they are truly her only friends, it wasn’t too much of a stretch for me to accept that these teens would quickly believe her fears and jump to help her. That her new friend Rachel is also willing to help is harder to swallow especially given how much Rachel does in real life. A mysterious infusion of cash to help some of the others travel to where Steph ends up is … quite convenient.

There is some intricate plotting but also some plot holes and hand waving simplicities for the real world which pop up now and then. Since almost everything is told through Steph’s POV and she doesn’t know a lot of things, the reader is pretty much as in the dark as she is. It is very pointedly aimed at teen market as almost all teens are great people (except for one girl who is made to be prissy whiner who complains about the hacked robot sex-ed class) while adults are either clueless, uninvolved when and where they should be in their children’s lives, hateful/repressed/unfulfilled school staff, horrid cops, and of course the villain.

And then there is ChesireCat – the friendly AI who just wants to be helpful and who only asks for cat pictures. Cheerful ChesireCat effortlessly runs Catnet, shifts users into clowders based on their interests and personalities, keeps down spam (yay!), and can leap into action to help with the resources they have. The events in the book also show the dangers of putting too much out on the internet. But as much as they want to help, ChesireCat has to learn the limits of what they can do and the best way to do it. When the time arrives though, they utter one of the best lines in the whole book.

“I am the world’s most badass cat picture aficionado. I recommend that you put down your gun and surrender.”

At first, Steph is a fairly flat character but then she’s also had a lifetime of repressing most of her feelings for anyone but her mother whom Steph also knows hasn’t told her everything from the past. By the end of the book Steph appears to be on the way to finally opening up and demanding answers and consideration for what she wants in life. Still, I wonder how her lifestyle and worries up until then will affect her mentally – something which is not mentioned at all. There’s also some telling instead of showing to wrap things up.

Still … still once the danger really arrives, I was engaged and cheering Steph and her clowder on. The villain is of the oily, charming variety with only touches of bellicose “I will rule the world!” but given how much the internet, hacking, and AI are a part of the story, what he plans is chilling.

The danger in this book is resolved – mostly. But there is an open ending for something else and it’s this something else that made me bite and want to read What Will Happen Next. B-