REVIEW: Castles in the Clouds by Myra Johnson 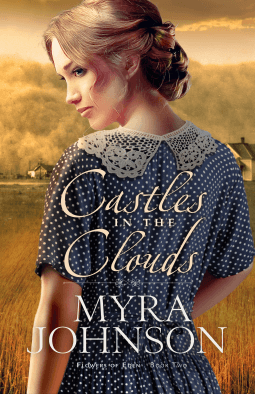 The first book in the Flowers of Eden series introduced readers to Bryony Linwood, an orphan trying desperately to provide for her sisters in the shadow of the Great Depression. In Castles in the Clouds, we meet one of those sisters—Larkspur Linwood, a young woman who has a passion for teaching but yearns for something more than life as a small-town Arkansas schoolmarm.

Young and impressionable, Lark mistakes a college professor’s interest for romantic love. When he offers her the chance to join his efforts to start a school in Kenya, she pictures herself bringing the light of knowledge to hundreds of African children eager to learn. But the menial tasks she’s assigned at the school aren’t so different from life on the farm where she grew up. Worse, her fragile heart is broken when she realizes her feelings for the charismatic professor are not returned. Miserable and deflated, she gives up and returns home.

Enter Professor Anson Schafer, whom she met briefly in Kenya. Partially blinded from an eye infection he contracted there, Professor Schafer cannot return to Africa. He has come to Lark’s school to recruit teachers like her for a more modest venture—the founding of schools and relief efforts here in the U.S. for those struggling through the Depression.

Still stinging from her experience in Kenya, Lark is reluctant to risk leaving her familiar surroundings, but she knows how great the need has become, and—although this isn’t the exciting life she’d envisioned—she finally agrees. As they work side by side, Lark begins to realize that the deepest satisfaction comes not so much from what you do, or where you do it, but from the attitude of your heart. She also slowly realizes that the gentle, determined Anson is the true love of her life.

I’m always on the lookout for a different setting and plot in books so this one caught my eye. Though it’s the second book in the series, I can follow along with the outlines given of the events of the first book.

This is a world where electricity and party line phones – much less private ones – are still luxuries rather then the standard. Characters worry about the prolonged drought, the dust storms, rising prices and the lack of jobs. Lark and her family rejoice when FDR is elected, hoping for better times than they got from Hoover. It’s a time when having only an eighth grade education was normal for rural areas. It’s also when doctors didn’t believe in telling patient’s family members anything about what was wrong with their loved ones.

Lark is thrilled at the chance to travel and hopefully spread her love of learning. But trouble is brewing because some teachers at the Catholic missionary school disapprove of Kenyan Christians’ long held ethnic beliefs outside of Christianity. What ethnic beliefs? It’s not spelled out in detail, because the men wouldn’t have been this blunt with unmarried Lark, but delicate hints are made about FGM. I like that Anson is aware and trying to address the concerns of the Kenyan population about Christian missionaries trying to impose their standards on the people as well as their growing discontent with British rule.

Lark doesn’t stay in Kenya long but the story makes clear that she was almost set up for failure due to personal reasons of two of the other teaching staff. Plus she wasn’t a fully qualified teacher yet, as opposed to the other two women, and with attendance falling there was simply nothing for her to do except janitorial duties. Hardly what she dreamed of doing though she did perform her assigned work without complaining.

In keeping with the social standards of 1932, it’s mentioned that Lark and the other women were chaperoned by the older, married nurse of the group. Restrictive by today’s standards but normal then. Lark’s heart is hurt but she’s honest enough to admit that her professor never promised anything nor led her on – it was Lark’s lack of experience and daydreams that made her imagine what wasn’t there. Lark is also not going to rule out any future relationships just because of this one. Maybe, after her heart has healed and she’s graduated there will be someone else for her.

Anson returns to a US in economic crisis. With his worsening eyesight due to trachoma precluding any return to Kenya, he begins to formulate a plan on what to do next with his life. If he can’t teach in Kenya, maybe he can help the poor of Arkansas. So with high hopes, he begins to rebuild his life there but finds that after being raised in Kenya, he’s got a lot to learn about race relations in the South. What he does know is that he’s falling for Lark but even if his friends think he’s a catch, he’s got to convince himself of that before trying to win her – especially after her first failed foray into romance.

Several “hot button” topics are present in the story. We’ve got Mexican immigrants, an older character with the onset of dementia, African American children facing inferior opportunities for schooling and Lark’s older sister experiencing pre-natal depression. I would guess that the first two these issues were more extensively covered in the first book while it’s the second two we see more of here. While it’s wonderful that all the main characters are against segregation and don’t espouse racial views, it seems a little too good to be true for real life in 1932. Or it did until racial views of the times reared their ugly heads and Anson and Co had to deal with the hate that attempting to educate black children in the same building with whites – even if on different evenings – fomented.

It’s an inspirational but it’s not a “convert the unbelievers” style of book. The main characters are deeply religious but don’t preach at anyone. Rather they remind each other to pray and ask for guidance about important issues. No God-stick beating here. I was confused that Anson is Catholic, Lark isn’t and no mention was made about any accommodations being made for that in their marriage.

Anson isn’t all sweetness and light. In fact, he can be a trial to his friend and fellow teacher who warns him, and not facetiously, to straighten up his attitude. Lark also gets frustrated at her younger sister’s insistence on taking over responsibilities for their tenant farm and sad that she’s stuck there instead of being at college or helping Anson with the school. The racial backlash only abates when the black children’s parents pull them out of school, a resolution which angers Anson the most.

So how is Anson to deal with the collapse of his dreams – first having to leave the school in Kenya, then scaling back his hoped for schools in Arkansas and finally facing the racism for educating children of color? And what about Lark who faces the loss of her dreams of teaching in Kenya, then plans to finish her degree and then the loss of her grandpa? Will they cave in or stand their ground?

As plot points unfurl, Anson and Lark learn first hand that when God closes one door, he opens a window somewhere else. If only they can keep to their course and be patient for it. Their families and friends also play a role in finally getting them past their noble intentions not to put their burgeoning feelings ahead of working for the good of the school.

This is a nice story filled with lovely people in it who have the best and most noble intentions but the oomph of the story tended to get lost in the accumulation of excess details about setting up schools and in Anson’s determination not to see a romantic future with Lark. A little trimming of that would have gone a long way. B-