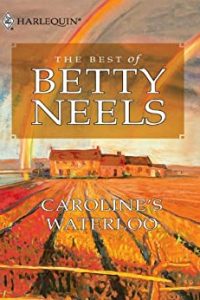 Caroline had never imagined that anyone would want to marry her. After all, she wasn’t pretty or clever in any way. But the imposing Professor Radinck Thoe van Erckelens did propose to her and, having speedily fallen in love with him, she accepted. However, Radinck was clear about what he wanted in a wife—a convenient hostess! Caroline could settle into that role. Or she could rise to the challenge of changing Radinck’s feelings for her.

Neels fans, I’m a little conflicted about this one. On the one hand, it has a lovely, competent nurse heroine with a plan of romantic attack who also has a faithful cat (Waterloo – she found him at that station when he was a kitten). On the other hand, the rude Dutch Doctor at times made me want to knee him in the family jewels and then declare that he isn’t worthy of our dear Caro. When he comes utterly unglued at the end because he thinks she’s done something, part of me was mentally railing at him, “Well, buddy you deserved this!” while the other part of me was smiling at Caro and telling her, “Well done sweetie!” Since I think he’s fallen totally at her feet and will remain her devoted hubby for life, I’ll give him the grudging benefit of the doubt.

To sum up the plot – English nurse Caroline is determined to crack the carapace of Dutch doctor Radinck Thoe van Erckelens (who is also a Baron and a Professor) and get him to return her love. He loved once but unwisely and his flighty wife left him for another before she and the lover died in a plane crash. Since then (some thirteen years) Radinck has been a veritable social hermit who has thrown himself into his work. That is until Caro and three of her nurse friends (who only asked her to join them on vacation as another had dropped out and Caro is well known as a friendly girl, willing to switch shifts, etc) crash their bikes in front of his stately family home.

Though he takes them all in, it’s clear he’d rather not and Caro, though suffering from a concussion, orders him “to stop being unfeeling” and give her the needle and thread and she’ll sew up her own cut leg. Caro might be a mousy little thing (though she has a nice voice which makes up for her ordinary face) but she can speak up for herself. Ignoring her, as Neels’s doctors usually do, Radinck sews her up, lets her stay until she’s healed, then gets the (darling) family retainer to pop her on the ferry back to England where she returns to her (truly) grotty bedsitter and her cat Waterloo. We see her competence and skill on the Women’s surgical ward before Radinck surprisingly shows up and pops the question asking her to join him in a totally boring marriage-of-convenience in which she’ll not question him, not nag him, run his house, and be his social hostess. “And above all, no romantic nonsense!”

Well, what’s not to love about that proposal? Caro makes him wait overnight before saying yes, because – unknown to him – she’s already fallen in love with him and is determined to salve his emotional wounds and win his love in return. “She wasn’t quite sure how she was going to do it, but it would be done.” It’s a long haul before she does.

Everyone falls for dear Caro because she’s such a sweetheart even saving a poor, abused pregnant donkey in between practicing Christmas carols with the retainers as a surprise for Radinck, learning to ride horseback so that Radinck’s posh friends won’t think badly of her, arranging endless hothouse flowers, badly knitting a sweater for Radinck, mangling working on a tapestry, and walking with Rex the Old English Sheepdog before retiring to bed with Waterloo who doesn’t seem to mind when Caro is reduced to tears and cries in his fur.

Meanwhile I wanted to cold cock Radinck a few times. Most of the time he’s at least punctilious and polite to Caro but more than once he adds a sneer or mocking look to their interactions. But the few times that Caro sees or senses a crack in the facade keeps her going and trying to get him to love her, even a little. She is determined, I’ll give her that. Then when it finally seems that Radinck is beginning to melt a bit and trying to reach out, Caro doubles down on the instructions he’d given her to not change his life or (basically) expect anything from him. It’s not exactly “malicious compliance” but it’s close.

Caro has one last “this is it and if it doesn’t work, I’m outta here” trick up her sleeve to pull and Hurrah! it finally brings Ridiculous Radinck to his senses to fall at her feet after showering kisses on her. At this point I feel I’ve suffered alongside Caro as she stalwartly carried on in the face of his coldness to win the day. Yes, he’s collapsed completely into lurve with her (and did realize at one point when he’d gone over the line and immediately apologized for the “Donkey Remark”) but boy howdy the trip to this point was a long, hard one and I hope he continues to buy her lovely pieces of jewelry (even if they’re just beads from Walmart given to her with real love) and understated haute couture gowns to make up for his initial boorishness. B-