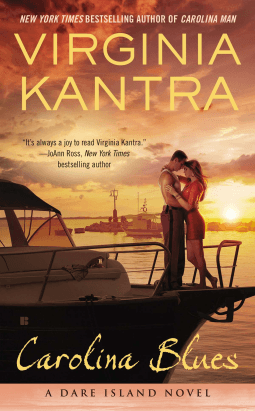 After enjoying the first three books “Carolina” books which focused on the adult Fletcher siblings, I wondered if they would be limited to a trilogy. Now it is obvious that the series is going to expand, involving other people on this Dare Island community of North Carolina.

“Carolina Blues” is more character focused than the last book, “Carolina Man,” in which the story arc which carried through the first three books was completed. It also features two outsiders to the community though thankfully it avoids any “us v them” elements. Instead the main characters are the new Chief of Police and a psychology PhD student looking to break her writer’s block.

They have a lot in common as each has been trained to watch, ask questions of, and interpret information given or not given by suspects/clients who might or might not be telling everything or the truth about anything. There is sly fun in watching them use their tricks on each other and be annoyed by the other doing it.

But they also know where the other has been, the dark secrets that can haunt you, the remembered pain, the need to tell another person about what they’ve been through, the downside of 15 minutes of fame and the demands of people you don’t know. Jack has the police/SWAT experience to call Lauren on her guilt over how the hostage situation ended and the responsibility she feels about it while Lauren focuses on getting Jack to open up about his feelings.

Despite the sexual exploration of most of the flat surfaces, and a few of the vertical ones, on Jack’s boat, both are hiding their feelings, retreating from true emotional intimacy. Jack and Lauren have used their analytical skills as a psychologist or a cop to keep people at a distance as they analyze them. Their drift towards a relationship comes in slow, sometimes unsure steps. Jack seems to want her to stay over at his boat past the usual “morning walk of shame” checkout time Lauren is used to in her past fixer-upper one-night-stands while Lauren makes Jack think in terms of the future.

Still things don’t always go smoothly as when Lauren pushes for Jack to tell her about his day without being clearly upfront about how long she’s planning to stay on the island. Meanwhile Jack doesn’t think to tell Lauren why his ex-wife arrives in town and what this might or might not mean for their relationship. Just because someone is trained to use communication as a tool doesn’t mean they’ll always be good at it when it counts.

Jack and Lauren’s trip to trust and love takes a while to happen. Since the book doesn’t have a lot of external conflict, that is the main element of the plot. While I enjoyed the laid back, easy style that I’ve come to expect from this series, there were still times when I felt a bit adrift. As the story neared the finale, Jack and Lauren still appeared to have a gulf between them and a HEA. They’ve both settled issues from the past and seem ready to move forward but I’m not quite sure I totally buy into the fact that they’ve arrived in their relationship. “I love yous” have been said, they’re both going to end up in the same place, there’s even a public declaration straight out of a Chick Flick but somehow I’m still not convinced. Maybe over the course of the next book – which from the review I’m looking forward to – I’ll be more sure but this one ends on a B- for me.