Ah, carnivals! Cotton candy, funnel cakes, ferris wheels and rigged games. Definitely a mainstay of summer. Of course, many a novel has been written about the carnival and it was only a matter of time until a new anthology made them its theme. 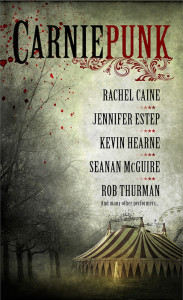 Carniepunk is one of those anthologies that features stories written by various novelists. In this case, they’re urban fantasy and paranormal authors. Some authors you’ve read, some of them you’ve heard of, and others are new to you entirely. Many of the stories are geared towards enticing readers to check out the author’s existing books; most of them are tied into their signature series. The good thing about this is that if you like a story, there are other books you can check out right away. The bad thing about it, however, is that more often than not, the short story depends too much on the reader being familiar with the series it draws upon and fails to stand on its own. Dangerous for readers who’ve never been exposed to a particular writer’s work before.

Carniepunk opens with “Painted Love,” a quirky and unusual story by Rob Thurman. The story itself is fairly average — a violent carnie with homicidal tendencies — but the reveal at the end, while rather WTF-inducing, really sticks with you. I’m still not sure whether I liked this story or not but it’s very memorable. Let’s leave it at that.

The majority of “The Three Lives of Lydia” by Delilah Dawson was rather ho-hum for me. Set in the world of Dawson’s Blud series, it tells the story of a girl with a sad past who has found herself in another world. Not the biggest fan of portal stories, this was a major hurdle for me. But I loved the ending, which was twisted and grim. Probably more of a horror story than a straight up urban fantasy or paranormal.

“The Demon Barket of Wheat Street” by Kevin Hearne was very much a standard UF story. Part of the Iron Druid series, I think this would appeal to fans of Jim Butcher. It’s a good enough story, but as jaded as I am about the UF genre these days, I need more to impress me than the same old “investigation, danger, fight the bad guy, win!” pattern.

“The Sweeter the Juice” by Mark Henry actually featured a trans woman as the protagonist. That’s still rare enough these days that it deserves mention. It asks the question of what happens to pre-op trans patients after the zombie apocalypse, in a world when most doctors have been killed. I’ve never been a fan of Henry’s gross out tendencies so I’m a hard sell on this story.

In Jaye Wells’s “The Werewife,” a couple finds their marriage strained after a visit to a carnival. It was an interesting examination of how the supernatural can show the cracks in a relationship, but I found the wife rather unsympathetic. That likely was the intent but I think a more nuanced portrayal would have given the husband’s choice at the end more impact.

“The Cold Girl” by Rachel Caine is my favorite story of the anthology. It’s about a teenaged girl who discovers her boyfriend has been up to no good (and not the usual “he’s cheating” no good either), what happens when he finds out she knows his secret, and how she retaliates. It’s a very well put together story, and I loved the Cold Girl and the way she shows mercy at the end.

In Allison Pang’s “A Duet with Darkness,” we return to the world of Pang’s Abby Sinclair series. I admit I wasn’t a fan of the first book, so I didn’t expect much. Because the story is a very straightforward presentation of what happens to the prideful, I found it mediocre overall. Might be worth a look for people who love music and bands, though.

“Recession of the Divine” by Hillary Jacques makes excellent use of Greek mythology without falling back on the usual suspects. A nicely self-contained short story that’s actually a short story and not a novel masquerading as a short story. Another one I liked.

“Parlor Tricks” by Jennifer Estep features characters from her Elemental Assassin series. Another story that follows the usual UF plotline. I’m normally a fan of lady assassins, but I unfortunately haven’t been able to get into this series. I think I would have been more into this story if it hadn’t fallen back on a tired cliche: the female antagonist is evil because she wants to be young and beautiful forever and will do whatever it takes to remain that way. Boring.

In “Freak House” by Kelly Meding, a half-djinn tries to find and rescue her missing father. I liked this one because it revolved around family relationships and the fact that the heroine’s father was not one of those jerkface dads you see so often in fantasy. I also thought her special ability of causing conflict was interesting.

“The Inside Man” by Nicole Peeler is set in the universe of her Jane True novels but features a different set of characters. While it relies on that now-cliche “clowns are scary” trope, I do have a weakness for female detectives. And in this case, it’s three detectives who work together and who are friends. The three women go to investigate some strange happenings but two of them fall prey to it, leaving the last one to rescue her friends and save everyone else affected. Not sure we really needed the rape backstory for one of the women, but I like the fact that all of the women were nonwhite.

Jackie Kessler’s “A Chance in Hell” picks up where her series about Jezebel the succubus left off. Jez is trying to learn about humanity in order to fight the King of Hell for his throne. Or something. I definitely felt like I was missing something. One of the weakest stories in the entire anthology, in my opinion.

“Hell’s Menagerie” by Kelly Gay is set in the world of the Charlie Madigan series and features the daughter of that series’s heroine and her quest to rescue some hellhounds who’ve been stolen for an underground fighting ring. This is one of those stories where I felt like I should have liked more than I did. Nothing is wrong with it. I just couldn’t care less what happened.

“Daughter of the Midway, the Mermaid, and the Open, Lonely Sea” by Seanan McGuire is a haunting story about, you guessed it, mermaids. It’s about growing up, family secrets, and relationships between mothers and daughters. It has an ending that, while not what I’d exactly call happy, hits you hard and lingers for a very long time.

Carniepunk is a mixed bag of stories. That said, I don’t think there were any stories that were standout terrible — not the case in other anthologies I’ve read — and a couple that were excellent. Overall, I think the anthology warrants a B-. Definitely worth checking out if a few of these authors interest you.