Why am I reading this older book of yours? There’s a story behind this and I’m going to tell it to you. You see, Jane usually gets all the printed arcs submitted to DA and then she divvies them up and mails them out to us. Sometimes she needs to pad the box so that all that arc-y goodness isn’t sloshin’ around while in transit. Usually she uses wadded up pieces of paper but on one memorable occasion she employed the (thankfully unused) diapers that her muchkin had outgrown. A few months ago I got another big box o’ books and after staggering inside under its weight I heaved it onto my couch and tore into it. I *pawed through it* checked out this author and that blurb and along the way my subconscious mind noted that there was something weird tucked into the box but I’m thinking, “aw, it’s just paper.” So I mosied along until at last I had looked at all the arcs and only then did I pick up the “padding.” And I stared at it. Then looked closer. Yep, still the same thing. A package of Tim Tams. A package of Tim Tams! Whoohoo! Then I emailed Jane and asked, “where’d the Tim Tams come from?” Sarah Mayberry, she emailed back. Right then and there I knew I needed to review another one of your books. For sure I can be bought but I’m not (that) cheap. 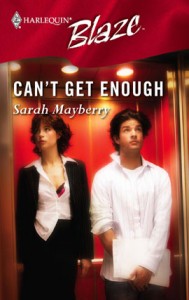 My next task was to try and find one of your books that hadn’t already been reviewed at DA. One by one I ruled out this book and that book as having already been snatched up by my fellow reviewers. Dayum but we like your books. Finally I looked at “Can’t Get Enough” and found myself chuckling at the cover. The blurb sounded good too so I downloaded it to get started on.

“He’s everything she despises-a babe magnet with more notches on his belt than a millipede has legs.

And he thinks his coworker is wound so tightly she irons her underwear at night.

But when Jack Brook and Claire Marsden get stuck in a sweltering elevator one afternoon, it’s a different story. By the time they’re rescued, Jack and Claire have swapped confidences and oh, they’ve had the most spectacular sex of their lives!

Back in the office they’re still butting heads over projects, but now there’s a heightened awareness added to the mix. With this kind of tension in the air, how can they resist another round of sexy indulgence?”

Right away I ran into something I’m getting tired of. I can deal with uptight or babe magnet characters but does uptight always have to mean “she hasn’t been laid in months?” And does a hero have to act the babe magnet because deep down he’s hurting from personal issues? Must the heroine always be humiliated before the hero multiple times – can’t it ever be the other way around? And does the hero have to be brought low because he can’t control his sexual urges for the heroine? Yeah, I know this is a romance book and these are time honored tropes but a reader can hope, can’t she?

Still Claire is a smart, dedicated, hard worker who is successful at her job and who is admired by the Powers That Be who plan to move her up in the company. Any blushing she does is not because she’s screwed up at the work place. Jack is also cut from the same cloth and to his credit is determined not to take accolades for a job that he hasn’t put the hours in on. It takes something deep down and gut wrenching to cause him to screw up a meeting.

Another part of the story that works for me is that Claire’s deep seated drive to succeed and Jack’s determination not to settle into a committed relationship derive from the backgrounds you’ve given them. Claire has always sought the notice and approval of her distant, uninvolved father while the loss of Jack’s twin brother to kidney disease has made him wary of becoming too attached to anyone new. If you’re going to pull out the authorial tiny violin and tug at my emotions, at least make it a believable tune.

Claire and Jack start out at the far end of the spectrum but they begin to see the hidden depths of the other fairly quickly after the events of the book start and continue to learn more about each other until the end of the story. Thank you, thank you as I find it hard to accept a HEA for a couple who begin as opponents, stay that way for most of the book and then on the second to the last page suddenly do an about face for love.

The vanilla sex is hot. Hot enough to singe the pages of the book. Though at times I did feel that there were actually four main characters present – Claire, Claire’s nipples, Jack and Mr. Stiffy. Claire and Jack are definitely sexually compatible to go along with their eventual emotional compatibility. I can see that their bed, their kitchen counters, the sofa, the rugs, ad the shower – to name a few locations – will be seeing lots of action. The cars? I’m sure these two will be inventive but gear shifts due tend to hamper hot and heavy auto action.

But what I really like here is that these two have opened up to each other, revealed their inner selves and have accepted the other “as is.” They also make the other laugh and have similar taste in movies. They seem well on their way to to a HEA and to Jack taking back his announcement to the office staff that they aren’t sleeping together. Well, that’s going to be fairly obvious pretty soon, anyway. B-