I read and totally enjoyed the first book in this series, Ascension, but I admit I did it with a lot of guilt. There were so many themes and tropes in the book that echoed previous paranormal romance series that “fresh and new” just wasn’t a description I could give. But compelling and addictive? Yep, I can go there. 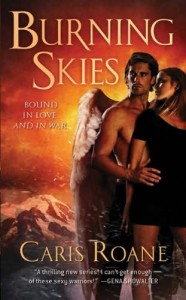 Book 2 doesn’t disappoint and in fact, maybe because I have bought into the world building no matter how derivative it may be, I liked Burning Skies even more than Ascension. The basic worldbuilding might be commonly known to readers of vampire series. There are two sets of vampires: the good ones and the bad ones. Death vamps are known by their blue tinge and are being created by the Commander, the leader of the evil. Endelle heads up the good guys which is comprised primarily of seven Warriors of the Blood and juiced up humans.

Marcus left Second Earth and his Warrior brothers 200 years ago. His sister had died and with it every desire to continue the battle he saw as fruitless and neverending. But the breh heddren, a mythical mate bond has caught up with him and slowly his world starts revolving around his desire, quest, need for Havily Morgan.

What prevents Marcus and Havily from fully embracing the breh heddren is loss and fear. Marcus tried to excise himself from the Brotherhood and create a new life. Being immortal at war means seeing your loved ones die repeatedly. Havily suffers from the same. She is over one hundred years old and has loved and lost two husbands. She doesn’t think she’s up for opening her heart again. She particularly doesn’t want to get involved with Marcus, whom she labels a quitter.

She lifted a brow. “I’m scared. You’re … you’re an awe-inspiring man, a warrior of excellence—”

“Yes. That disturbs me most of all. What if I fall for you, I mean really fall for you, and then you disappear because life gets a little too hard?

I just wish the deserter issue had been hit harder.  I wondered if you intentionally held back, worried that painting Marcus too heavily with the quitter brush would have marred him too great for a reader.

The book also falters with the inability to really explain the boundaries of the world. In other words, why do the Commander and Endelle agree to the terms set forth by the Committee? This is a question I had in book one and it still remains unanswered today. Marcus’ leap from being the sullen deserter to fully embracing a return to the Brotherhood is made very easily, prompted by his feelings for Havily. Her acceptance of him was also brought about easily despite her previous disgust. Those two areas were ripe for conflict but neither of them were explored like I felt they could have been, taking a backseat, instead, to the overarching plot of good against evil.

I did appreciate that there was effort to show how Marcus and Havily would have gone for each other, regardless, but the mate bond draws these two together.

Thankfully the “cried” dialogue tag which permeated the first book in the most inappropriate of places seems to have been used more sparingly but it is still a frequently used term.  There is also repetitiveness in the use of “dream but not a dream” phrase used to describe Havily’s abilities to navigate the space in between worlds.  I could do with a lot less repetition.

Much attention is focused on how difficult the battle, how emotionally wearying it is, and how having a mate can ease the pain and make the sacrifice worthwhile. The agnst is built up around this concept. It is smart to build this up because it is the hook, I believe, that keeps readers coming back for me. We feel sad for these other tragic mateless warriors and want to see their happiness achieved in later books.

I liked this book and I know that I will want to re-read it but it’s not a book I can recommend without reservation. The reliance on the mate bond will be a barrier some readers won’t want to overcome.  For me, I can overlook the mate bond and enjoy the story for the humor and sexy paranormal pairing. B-

P.S. There is a strange subtext to the book that I’m not sure what to make of. [spoiler]Endelle is the leader of the “good” side but she is a terrible administrator. She’s short with people. Rude to them. And while she is the most powerful person on Second Earth and is the essentially the leader of the seven Warriors, she is displaced at the end by Marcus. Havily suggests it because Marcus is a great administrator. He spent 200 years on Mortal Earth building an empire and administrating it. Ceding this control over to Marcus gives Endelle more time to chase The Commander all over the world and make sure that his plans don’t come to fruition, but is the subtext that women lose power once a man is ready to step in and take the reins? [/spoiler]

→ Jane
Previous article: DA Week in Review: May 1 through May 8
Next Post: Unpacking the Navy SEAL hero in romance or the magic in “Let me take care of you”