Thanks to the Hunger Games, dystopian has become the new black in the young adult genre. Luckily, I have yet to get tired of the subgenre, which is good because it’s shaping up to be a flood for the next year or so. I was a little hesitant to pick up your new novel because the premise — a society where teenage pregnancy is glorified thanks to a virus that makes everyone sterile past a certain age — could go either way. But I set aside my misgivings and decided to give the book a try anyway. What I didn’t expect was a satire. I suppose all the very serious, grim dystopians out there failed to prepare me for Bumped. 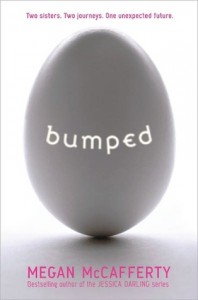 In the future, a virus has come along that makes people over the age of 18 sterile. I don’t know what it is with dystopians and these mysterious viruses that attack people once they get too “old” — they contract a horrible disease, they die, they become sterile. Is it simply a way to keep the focus on teenagers? A way to cause widespread social panic over the end of the human race? Convenient background plot conflict? Readers familiar with dystopians know this song and dance. In Bumped, a virus that makes everyone past the age of 18 sterile means they’ve turned towards teenagers to keep the human race going. Lucky teenagers.

This brings us to identical twins, Melody and Harmony. While their names are definitely some kind of special, at the very least the narrative (through Melody’s perspective) acknowledges it. Separated at birth, Melody and Harmony grew up under drastically different circumstances. Melody had a pampered, privileged life — on the surface anyway. Her adoptive parents were essentially grooming her to be their cash cow. What does this mean? It means Melody is a professional surrogate: she has a contract to bear a child for a wealthy, affluent couple. On the other end of the spectrum we have Harmony, who grew up in religious Goodside. In Goodside, women are raised to become perfect wives and mothers. They would never dream of doing something so base and vulgar as “pregging” for profit.

Melody is under a lot of strain. Even though she scored the conception contract at a young age, she has yet to bear a child and fulfill the contract. It’s not her fault. The couple who contracted her are picky and they’ve spent a long time looking for the perfect sperm donor. This is all well and good except Melody is approaching the end of her fertile years. All the other girls her age have already either gotten pregnant or given birth. She is the only one who hasn’t, stigmatizing her. Things aren’t helped by the fact that she’s falling in love with her best friend, Zen, who is not at all the right candidate to be the father of her as-yet unconceived child.

Things aren’t helped when her Goodsider twin, Harmony, shows up on her doorstep. Harmony has made it her mission to help Melody see the light and realize that what she’s doing is wrong. When Melody shows absolutely no inclination of doing so, Harmony decides on taking drastic measures to save her sister’s soul. In the process, she also reveals that she has her own problems to deal with.

For the first few chapters, I had no idea what to think about this book. I possibly might have sent a few perplexed emails to Jane and a couple other friends expressing my confusion. It was the cognitive dissonance. This is a horrifying future where young girls are funneled into becoming glorified baby-making machines. They have stores where little girls can try on prosthetics to make them look pregnant. Parties where aphrodisiacs are passed around like candy are commonplace. Condoms and other forms of birth control are taboo. And even if you don’t want to get pregnant, you may have no choice in the matter. Your parents might sell you off to the highest bidder. Auctioning off your newborn infant might be your only way to pay for college. In this future, no one bats an eye at these things. After all, having babies is viewed as an attractive, and necessary, ability, and one that lasts for only a few years.

If the future depicted in Bumped had been described in the grim, stark manner that characterizes pretty much every other dystopian YA I’ve read recently, I probably would have thrown myself off a cliff. But Bumped doesn’t do that. Instead Bumped is written in a light, sardonic tone. It balances the subject matter very well, but I honestly had to struggle with it during the beginning of the book. I was torn between laughter and horror, and there were parts where I burst out laughing and then stopped because I felt guilty about it. It’s very rare for a novel to incite such conflicting emotions in me, and I think that’s both noteworthy and intentional.

Bumped uses a lot of slang that people may find off-putting. It didn’t bother me personally because it fit the world being presented. It reminded me of the vocabulary we see in cyberpunk novels. The words are common but used in different ways due to a linguistic drift. “Pregging for profit” means being a surrogate for hire. “Bumping” means having sex for the purpose of conception. “Everything but” means a sexual partner who does everything with you except for bumping. The slang does follow an internal consistency but the reader has to go along with the ride and let it sink in.

The downside of the novel is that I only liked one of the twins, Melody. I enjoyed her narrative of being brought up a certain way, only to realize how oppressive her world actually is. Harmony’s narrative had a similar structure — only coming from the other direction — but I have a hard time empathizing with religious fundamentalists and Harmony was a religious fundamentalist taken to the most extreme caricature. Because of that, it was hard for me to believe that Harmony could have such a dramatic impact on the other character’s lives in only a few days. I can see her arrival as being a shake-up, but her the person? I need a little more to buy it.

The thing I liked most about Bumped, however, is that despite the premise, it’s very sex positive. No one in the book is shamed for having sex. What is presented as wrong is that they don’t have a choice about how and why they have sex. It’s all pushed upon them by external forces: peer pressure, parents, couples wanting children, media messages, store, etc. All of which dismisses, and sometimes goes directly against, the participants’ actual thoughts on the act itself. I found the social commentary woven throughout the narrative was spot on.

I also liked that the society if Bumped was multicultural. It wasn’t driven home with a sledgehammer but there were enough cues to see that Harmony and Melody’s white European phenotype was considered unusual and that a couple wanting white European genetic stock for their baby was considered elitist. It was part of the social commentary laden throughout the satire that I liked.

While the book had a very rough start between the grim content and the lighthearted tone, I’m glad I stuck with it. It’s not often that I run across a genuine satire novel these days and to see it blended with a dystopian novel was surprising in a good way. Readers looking for a hardcore dystopian probably would do better to look elsewhere but if you want to read a novel that makes you think, you could do far worse than this. I admit I’m looking forward to the sequel. B-

P.S. – Great job with the cover, HarperCollins. I liked the simplicity and symbolism.