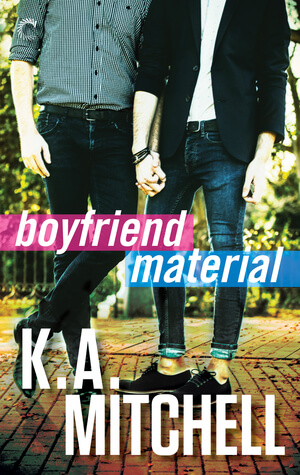 I enjoyed book one of the Ethan & Wyatt series, Getting Him Back, which I reviewed here in February, so I was eager to read the second installment.

While the first book is told from Ethan’s POV, this time we get Wyatt’s. This was both good and bad. Wyatt is deeply self-conscious about both his appearance (he has Waardenburg Syndrome and this results, for Wyatt, in having broadly spaced bi-coloured eyes and a thick white streak in the front of his hair) and his past incarceration in juvenile detention. He and Ethan have only been dating for a few weeks and it’s fair to say Wyatt hasn’t relaxed into it yet. Wyatt was a bit mysterious in Getting Him Back. In Boyfriend Material he’s an open book – unfortunately a lot of his pages were filled with anxiety and a conviction that Ethan is going to dump him any second.  While I understand that in real life, people don’t actually get over deeply seated anxieties and lack of self-esteem in a matter of weeks, from a narrative perspective it started to get old pretty quickly.

Boyfriend Material is less than 100 pages and that disappointed me a little. Conversely (I do like to be contrary), I really wouldn’t want to read much more of Wyatt’s unalloyed insecurities. The arc of this book is Wyatt’s insecurities though, so maybe the story was as long as it needed to be?

Wyatt has never been a boyfriend before and being close to someone, both emotionally and physical is not only new, but also, challenging for him. He doesn’t really know what he’s doing and he’s terrified he’s going to stuff things up. Of course, that kind of fear is often a self-fulfilling prophecy, something Wyatt eventually realises. There is also the spectre of Ethan’s ex, Blake, in the background. Blake wants Ethan back. Wyatt sees in Blake everything he is not – accomplished athlete, good-looking and muscular, confident and experienced. (Ethan also sees the other things Blake is that Wyatt is not though – shallow, deceptive, vicious, inconsistent.)

When Ethan invites Wyatt home to meet his parents for Thanksgiving, Wyatt is terrified. The thought of being exposed to 20 new people is something out of a nightmare. He wants to be with Ethan but all the rest? It causes him to panic.

In Getting Him Back, Ethan has to deal with not being too clingy and not over-thinking and over-planning everything. In Boyfriend Material, Wyatt has to learn to take yes for an answer.

It is a little more complicated than that though because Wyatt’s criminal past comes back to bite. What I did appreciate is that Wyatt makes no attempt to make excuses for his actions as a 14 year old. He did the crime, he did the time. It’s a part of his past but it exists and it can’t be glossed over.

I was interested in the way appearance was treated in the book. Wyatt doesn’t think much about his appearance except to be at worst contemptuous or at best dismissive of it. In fact, in the book, Wyatt’s appearance is mostly present by being absent – he hunches his shoulders and hides his face and hair under a hoodie. As the object of his desire, it made sense to me that Ethan’s appearance, his eyes, his hair, his musculature, his happy trail, would feature strongly in Wyatt’s musings. But most of the other cast in the book are ciphers from the physical perspective. Wyatt’s uncle Owen is described only in as much as he also has Waardenburg’s; uncle Owen’s girlfriend, Christine, is described not at all. Wyatt thinks of Christine only in terms of her character. Ethan’s parents only feature in Wyatt’s thoughts in so far as they relate to Ethan’s appearance (he gets his height from his dad for instance). It struck me as unique that so many characters could be so… featureless. But it also seemed to fit Wyatt’s character. He’s self-absorbed (not exactly selfish and certainly not narcissistic), partly because of his hangups and partly because most teenagers are and there’s really only one person he wants to look at. It made sense then, that appearance didn’t feature strongly in the story apart from what Wyatt sees as the juxtaposition between the two protagonists. I noticed, particularly in relation to Christine actually, that there is no heteronormative male gaze in this book. I liked it.

I did want to get to know Wyatt better and I am, overall, glad to have spent some time in his head. I was however, very relieved that by the end of Boyfriend Material, he was finally starting to get it. He has to share with Ethan and stop living in his own head. Ethan did not always make this easy, particularly because he has a habit of taking the easy path when it comes to telling people difficult things – Ethan learned his own lessons (I hope!) here.

I am still in for the next installment – the characters grabbed me in book one and I’m not ready to let them go yet. But I do hope Wyatt can move on from only being a ball of insecurity. While it is realistic, what I’d rather read about is what Wyatt has decided to do about it. It wasn’t so much his insecurities that bothered me, rather it was his passivity in it. My sense is that Wyatt will take action from now on – I hope I’m right.

→ Kaetrin
Previous article: Wednesday News: On words and pictures
Next Post: REVIEW: The Toast of the Town by Alice Chetwynd Ley