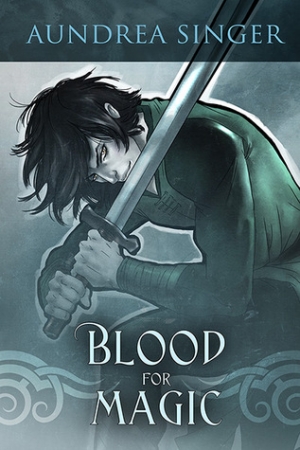 Twenty-year-old Tarquin is smart, tactless, and braver than he knows. He’s also been Mage of the Realm of Kelor for two years, taking the title from his mother after she died protecting Kelor from a terrible threat.

While on a quest to heal his dying brother, Tarquin is attacked by a horrific, flesh-eating monster. He’s saved by an enigmatic and mute young soldier, cursed with a terrifying form that conceals the heart of a knight. There’s an almost instant attraction between the two men, but no time to explore it. The monster’s attack is the harbinger of a new invasion.

With Kelor helpless, the realm’s only hope lies with Tarquin. As Mage of the Realm, he alone can sacrifice himself, the way his mother did, in exchange for unimaginably powerful magic. He’s prepared to give up his life to defeat the coming evil, but before the battle is over, he’ll be faced not just with his own death, but the death of everyone he cares about.

Including the monster he’s come to love.

I purchased your book because it does not take much to convince me to purchase m/m fantasy, especially when the blurb suggests more than a “mostly sex and no plot” kind of story. I was very impressed that you threw the reader into the middle of the action rather than supplying a long and boring info dump in the beginning of the story. I was a little confused while reading the first chapter, and maybe the second one too, but my confusion did not stop me from being interested in what happened next, and you really did supply the necessary information as the narrative went along.

However, because the knowledge which the reader needs to be fully oriented in this world is spread throughout the book, I have a problem. I often debate with myself over what constitutes a spoiler, but usually I am okay with revealing a setup that is laid out in the beginning. All we know in the beginning of this story is that Tarquin, Ainya, and Gretta are on a mission. Tarquin wants to save his dying brother, but we don’t find out exactly what happened to him until later. The three are also attacked by a monster. Apparently there was a war with these monsters in which they were burned, and they were not supposed to be here, but there they are. The monster also attacked villagers and there are deadly losses which our heroes cannot do much about. When the monster (haldur) tries to attack our heroes and places their lives in danger, an enigmatic and mute young soldier (let’s call him Five) appears and help some of our heroes survive. They then bring Five to their home.  It looks like the haldur are planning another invasion after the deadly war which supposedly killed them/ burned them/ made them move away.

The blurb tells you that Tarquin is a prince and a mage of the realm. My goodness I liked this boy, who when we meet him seems to be consumed by guilt and the idea that he should sacrifice himself if the war comes again (well, it is clear that the war is coming again). There are mages and magicians in this realm, and mages can do stronger magic than magicians but they pay high price for that – they have to cut themselves every time they do a spell. Usually it is a small cut, no more than a nick, but with the increasing strength and potency of the spell, I guess more blood is required.

I actually thought that this was an interesting play on a well-known theme – working magic often requires some kind of price from the person in many fantasy books, not necessarily life sacrifice, but one has to pay with something more often than not. This book poses the question of whether sometimes the price is too high and if that is the case, what to do about it.  In this story the price for that unimaginably powerful magic, which may ( or may not?) stop another haldur invasion is death – the mage who does the ritual usually bleeds to death, and this is what happened to Tarquin’s blood mother. This realm is ruled by a queen and her consort, there is never a king, so Tarquin had two moms. They both gave birth to one son each ( it is explained in the book why that happened/needed to happen) and his blood mother was a mage of the realm who died doing the spell which pretty much ended the war.

Tarquin wants to do the same (he had some previous experiences with the ritual which I can’t describe without being spoilerish), but of course his other mother, the Warrior Queen Isobel, does not want him to do it.

I really cannot tell you whether Tarquin ends up doing the ritual or not and what happens as the result of his actions. I will tell you that I liked the results and hope you will too.

You will probably want to know if there is a romance in this book. Yes, there is a romance storyline. I think Tarquin’s struggle over who he is, how he should use magic or not, and what is magic in this world, was given more attention than his romance with the mute soldier (let’s continue calling him Five). In fact, I would say that romance was quite Instant, but I really liked them together anyway.

The villains in this story are really really evil – I mean they are monsters, so they are supposed to be, and I guess if the idea was to concentrate on Tarquin and his struggles, it did not matter who villains there, but I have never been too fond of one-dimensional villains no matter what kind of species they are.

There are a lot of women in positions of power and influence in this book, which I really enjoyed, and I enjoyed seeing hints of their personalities. If the author had wanted to tell their stories in more detail, I would have liked reading about them.

I’ll end by warning for possible editing issues – I spotted a couple but I always worry that this indicates that I might have missed even more.