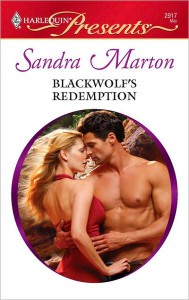 I honestly had no idea what I was getting in for when I read Blackwolf’s Redemption. It was a Harlequin Presents and 8 of those are delivered to my Harlequin digital account monthly via my subscription. I assumed that it was just another HP but instead it’s a time travel, only this time the time travel only takes us back to 1975, the land of bell bottoms and bra burnings.

(I thought the epigraph by Monty Python “And now for something completely different” was spot on).

Sienna Cummings, a graduate student in anthropology, has come to observe the summer solstice in Blackwolf Canyon, Montana. The land had once been owned by the Blackwolf family, the last known descendant was Jesse Blackwolf, who fought in Vietnam and then virtually disappeared, at least Sienna could find little information for him.

Shortly before solstice, an electrical storm whips up and then next thing Sienna knows, she’s lying on a rock in the middle of a canyon with some strange shirtless man leaning over her.

Jesse Blackwolf has raised on this land in Montana and had been taught by his father of the precious and almost mystical tie his people had with the land. But when Jesse came back from Vietnam, the idea of something spiritual in the land filled him with revulsion. He could no longer tolerate the mysticism and the superstitions and he would sell the land as the first of his efforts to eradicate such childish idealism.

Something has brought Jesse to the sacred rock on the summer solstice. The papers are ready to sell the land and for Jesse to move, for good, to San Francisco. A strange lightning storm occurs and suddenly Jesse sees a body on the sacred rock. Jesse first thinks Sienna is a thief, there to take artifacts, but soon discards that notion. Something is off about her, but he can’t deny the attraction he has toward her.

I think the thing I longed for the most in this book was more. The bits where Sienna employs her future knowledge are too few but good when utilized. I enjoyed the descriptions of the land and the relationship that Jesse had with his parents, but again felt like I wanted more. The “fish out of water” trope is used for comedic effect particularly when Sienna is tired of being treated as a nonentity in Jesse’s business world but only occasionally.

Sienna spent quite a bit of time running very hot and very cold. It was almost cruel the number of times she excited the hero and he got no release. (and I don’t say this very often). At least she apologizes. Jesse is not at all the harsh alpha male trying to exact revenge on the heroine for some perceived slight, but much is made of his warrior ancestry and certainly the way he was portrayed was as someone strong and capable. Together the two were very combustible.

I did enjoy this “something different” and would read more Marton in the future, but I confess that the book left me wanting, much like poor Jesse after Sienna had worked him up. I hate giving the book a C+ because the writing is very good and I felt it was on the cusp of being a keeper but I don’t have any urge to re-read it again. Having said that, it was entertaining and I don’t regret any time I spent reading the story. B-?

This is a Harlequin Presents and thus the pricing is up to the retailer. The pre order links aren’t live at several of the online stores.

→ Jane
Previous article: Midday Links: Get Lover Mine and Others for under $3.00
Next Post: Friday Film Review: A Fish Called Wanda