I’ve now found out that even a lesser Novik book is still pretty good. But this one should come with a warning to load up on lots of chocolate, a glass of wine or some Prozac before starting. Jaysus, there were a lot of depressing events to read and, for a while, every time I started a new chapter things just seemed to get worse for our intrepid British Aviators and their marvelous dragon, Temeraire. 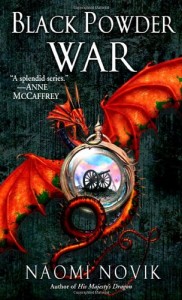 The story starts off well enough in China were book two had ended with Temeraire and his crew, including his Captain Will Laurence, defeating the sinister plans of a Chinese prince to overthrow the throne. By doing so, they’ve made an implacable enemy of Lien, the Celestial dragon companion of the prince. Her rage extends past Laurence and Temeraire to include anything British. While waiting for favorable winds, Temeraire’s dragon transport is badly damaged by fire soon followed by a letter instructing Laurence to proceed to Istanbul with all speed to collect three dragon eggs which the British government has bought from the Sultan. What follows is an interesting yet seemingly interminable trip via the old Silk Road for Temeraire and his crew as they race to get the eggs before any can hatch.

There’s some fun as they run into a herd of feral dragons who follow them, and make nuisances of themselves, to the Sultan’s palace. Then things sort of bog down again during the (literally) Byzantine negotiations to get the eggs, find out what’s gone wrong about getting the eggs, find the eggs and make off with them. Then, just when things get moving again, Temeraire and crew arrive just in time to be conscripted into the Prussian Army as it readies itself to face Napoleon. More bogging down (at times again, literally). And waiting….and a few fights which go badly, then waiting and things going still worse for those who are trying to rein in the Corsican. Then at last some more fun when one of the eggs is ready to hatch. Then, oh help us, more things going badly and the end in sight for our boys before you pull it out at the end.

I was delighted to read more about the fabulous Temeraire and loved the bond of emotion between he and Laurence. I enjoyed the way you snatched victory from the jaws of defeat (kind of like a dragon grabbing his next meal) in the final few pages. The firebreathing Kaziliks are a nice addition to the growing list of dragon breeds in the stories, though I wonder if they’re all as bloodthirsty as But I gotta be honest and say that my attention did tend to wander, a lot, during parts of the story.

I think you did a marvelous job of inserting dragons into the Napoleonic battles, Laurence’s sense of duty and honor are never more evident and as I said, the way you ended the story was inspired yet, it does drag somewhat. Not enough to go lower than a B- but it’s not what I’d hoped for.

→ Jayne
Previous article: 1 in 4 Adults Have Not Read a Book in 2006
Next Post: REVIEW: Beyond Seduction by Stephanie Laurens