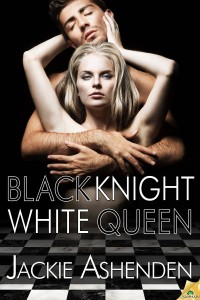 How many times has there been a chess champion as a hero? Right. None come to mind so I had to read it. I’ve tried two other books by you and I love your voice even if the direction the stories have taken have left me a little dissastified.

This is a short novel or a long novella. My calibre plugin says it is 46,089 words and it feels it. Izzy Cornwall packs up her bags and leaves her New Zealand home after her sister’s suicide.  She’s in Bangkok Thailand, sketching, and trying to lose herself in the city.  Aleksandr Shastin is a chess champion who has been trying to sublimate his own grief at the loss of his former teacher.   The two meet on the rooftop of Aleks’ swanky hotel.

There Izzy propositions Aleksandr who, in his own words, is surprised when he is never surprised.

One of the best features of this story is how in character each person acts. Aleks is this cool headed strategy master and Izzy is a fly by the seat of her pants artist. Izzy pushes Aleks off center and he fights it initially because his whole world is being in control.  When the one time sexual encounter with Izzy turns into something more, Aleks instinct is to close down because when she makes him feel, the loss of his mentor threatens to engulf him.

Izzy’s just the same as Aleks but her grief and emotions are displayed separately.  She wants comfort and thinks in some way she can find it with this very hot stranger.  She wants to both find herself and forget in this foreign land and this foreign man.  Both grief and loneliness and relief are written into the pages of the story.  But because of their emotional state, I wasn’t entirely convinced that either of them were healed through their sexual intercourse which is essentially the only interaction that the two had throughout the story.

I wished we had much more about Izzy’s conflict. Her situation with her family and the loss of her sister was given only abbreviated space.  There were overt traditional themes to the characterizations with Izzy being soft, colorful, nurturing and Aleks being cold, hard, closed off.  It was a bit cliched and while it worked, there were times I wanted to be surprised but was resigned to the predictability of their actions.

Further, the story was very sexy and the two communicated via their bedroom activity, but I had a hard time believing in the HEA particularly when a major emotional movement occurs within the epilogue.  Part of this problem I attribute to the length. If this had been a full length novel, there would have been more space to explore the weighty issues of grief, loneliness and belonging.  While there was some lovely imagery in the prose, I still felt unfulfilled at the end.

She began to move slowly and deeply, and he told her she was beautiful in Russian because he couldn’t remember the words in English. A whole language lost because of her. Because of how she made him feel.