REVIEW: Beyond Shame by Kit Rocha 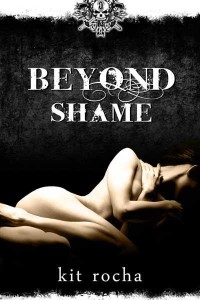 Noelle Cunningham is a councilman’s daughter wanting to explore the pleasures of the flesh, a forbidden activity.  For her subversive activities, Noelle is cast out of the Eden.  She is found by Jasper McCray, a lieutenant in Sector Four, and something about her city fragility and deep want in her eyes causes him to rescue her, like a abandoned kitten.  He brings her back and gives her to Lex who runs a bar in Sector 4.

Dallas O’Kane, the head of Sector 4 and sometime lover of Lex, gives the okay for Noelle to stay.  She must be “willing to tend bar, clean house, or suck dick by the end of the week”.  Sector 4’s survival is based on the money made through the distillation of liquor from cheap moonshine to smooth whiskey even those in Eden pay high amounts to smuggle inside the walls.

The focus of the story is on Noelle learning to own the freedom she’s been granted. Jasper is immediately attracted to her but wants her to come to him, to be submissive to him, only because that is truly what she wants.  Noelle is curious about everything from loving Lex to submitting to Jasper.  She wants to be dominated by someone.

My biggest complaint with this book is that it felt unfinished. The world building was started, but not fully fleshed out. The character arcs were provided but not fully developed. The HEA ending seemed forced. But despite these issues, Beyond Shame was a compelling read. It’s a weird blend of 20s prohibition and post apocalyptic tech. There are a number of complicated dynamics being set up for later books and at times I felt those dynamics overshadowed Noelle and Jasper’s romance.  I wasn’t entirely convinced at the end of the story that Noelle wanted to be with Jasper more than anyone else and that was Jasper’s dilemma.

Beyond Shame has several different pairings in the book, all centered around Noelle, as she learns to what it is like to give and receive pleasure from both men and women (Lex, Dallas, and Jasper).  There are fight scenes, sex scenes, and political machinations.  Violence and sex and liquor all seem intertwined. While it may seem a celebration of excess, it really isn’t. The idea is that outside the walls and within Sector 4 you have freedom to indulge:

Fights. Violence was almost as taboo as sex in Eden. “Jasper mentioned that, but why are they fighting? Did something happen?”

“Yeah, they’re breathing.” The blonde rolled her eyes. “Why don’t they fight? To settle scores, win respect, blow off steam. Make the chicks’ panties fall off, that’s a big one.”

This is promising start to a series and there are a ton of interesting stories to be told. Dallas and Lex are struggling for relationship power; Dallas is a world weary king.  Ace is a guy who loves woman but wants one in particular who seems to show no interest in him.  The ending felt like the beginning of a relationship between Jasper and Noelle and despite its unfinished nature, I’m still wildly curious to see where Kit Rocha takes me.  B-