REVIEW: Beyond Limits by Laura Griffin 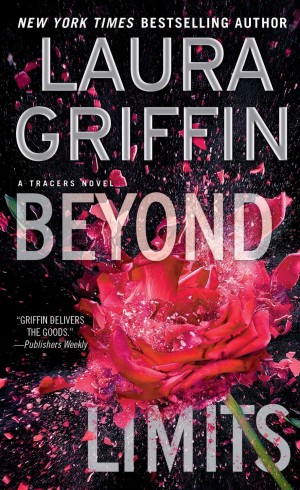 I’m usually not a huge fan of romantic suspense novels with terrorism plots, and the super-special military (super) heroes aren’t my cup of tea, either. So at least on paper, Beyond Limits wasn’t quite the book for me. But I have enjoyed several of your novels and I liked Elizabeth LeBlanc, the FBI agent who made appearances in Scorched and Exposed, so I decided it was worth a shot.

Blurb time: FBI agent Elizabeth LeBlanc is still caught in the aftermath of her last big case when she runs into the one man from her past who is sure to rock her equilibrium even more. Navy SEAL Derek Vaughn is back home from a harrowing rescue mission in which he found evidence of a secret terror cell on US soil. Elizabeth knows he’ll do anything to unravel the plot—including seducing her for information. And despite the risks involved, she’s tempted to let him. Together with the forensics experts at the Delphi Center, Derek and Elizabeth are closing in on the truth, but it may not be fast enough to avert a devastating attack…

That about covers it, though I should make it clear that Derek is not trying to seduce Elizabeth for information; he wants her, and he wants to be involved in the investigation in his own way, but those are two separate things. Also, although this book is part of your Tracers series, the Delphi Center and the scientists there play a fairly minor role. So it’s possible to jump in without reading most of the series, with the exception of Scorched, in which both Elizabeth and Derek played supporting roles. The main highlights of their introduction and interactions are covered. The short story: Elizabeth was one of the agents assigned to investigate the murder of an FBI agent, in which Derek’s SEAL friend was the main suspect. Their relationship started out adversarial, but they ended up working together and almost but not quite acting on their attraction. Derek tried to contact Elizabeth a few months later, but she figured there was no future in it and didn’t return his messages.

Beyond Limits takes place a year after the events of Scorched. Derek is part of a team sent to rescue two aid workers who had been taken hostage in Afghanistan; during the raid, they recovered information suggesting that Houston may be the target of a terror plot. Based on her work on the investigation in Scorched, Elizabeth is chosen for the FBI counter-terrorism task force assigned to the case. She suspects it’s because the agent in charge knows of her connection to Derek and wants to use her to keep tabs on him. Derek lost a good friend in the raid and has family in the Houston area, so this is personal for him. If this means occasionally working with the FBI, he’ll do that, and if he can get Elizabeth in bed, so much the better.

Let’s start with the good news: first, Beyond Limits kept me entertained. I read it on a flight, and while I’m not sure the plot would completely withstand scrutiny when not at cruising altitude, it was good enough for me. Second, Elizabeth did not let me down. She’s ambitious in terms of her career, she has no problem bossing people around if the need arises, and she’s got good ideas and insights. She works hard to be taken seriously – I can accept that this could be a situation in which being cute, petite and blond might not work in one’s favor. But she’s not perfect: she makes mistakes, tries to learn from them, and questions her decisions and choices. She lost her father, whom she was close to, at the age of 12, and has a difficult relationship with her mother. She knows that she’s been affected by her family issues, but she doesn’t mope about it. In short, she’s human and relatable.

The same, unfortunately, cannot be said for Derek, who is pure wish fulfillment material. He is off the charts good looking and sexy, smart, good at everything he does (sex included, duh), and of course, he can always outsmart the FBI because he’s a SEAL and better than everyone at everything. That’s not a character, it’s a cardboard cutout. I appreciate that SEALs go through very rigorous training and do an extremely hard job, but come on – can’t he have some flaws? Some issues to deal with? All that was missing was for him to be a billionaire, or a duke. Are there romances with billionaire duke SEALs? If not, I’m sure there will be some soon. Clearly it’s the next step in the evolution of the genre.

The outsmarting the FBI part often means outsmarting Elizabeth: Derek is forthcoming when he wants to, and disappears when it suits him. I think I was supposed to find some of this amusing, but I was annoyed. And even if he was super hot, I could not understand why Elizabeth wasn’t more annoyed, either. She was putting her career on the line to help him, while he was essentially belittling both her and the agents she was working with. At one point, Derek is explaining to Elizabeth where she went wrong in pursuing a terrorist target and Elizabeth remarks that she must have missed what he was taught in sniper school when she was at the FBI Academy – “Maybe we spent a little too much time on check fraud.” I’ll admit it – I was hoping for some check fraud to come up, or anything else in which Elizabeth had more expertise than Derek. Also, wouldn’t it be nice to read about sexy accountants solving crimes?

Elizabeth does have some very good ideas that lead to real breakthroughs in the investigation, and she feels that Derek does come to respect her career and abilities, so there was that. But for me, there needed to be more balance between them on the professional and personal side for much of the book. In general, the relationship could have been better developed, but with the rather complicated terrorist plot and the investigation driving much of what was happening, there wasn’t really time for that. I don’t expect romantic suspense to skimp on the suspense, but when the I Love You came up, my first thought was, “based on what?!”

So, the bottom line: I was not a fan of the hero at all, and felt that you could have focused more on the relationship and not waited until the end to make it more equal. On the other hand, I still like Elizabeth, and a book’s ability to get me through a flight cannot be underrated. B-.