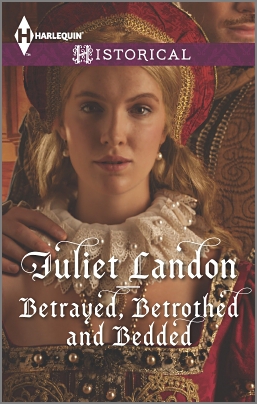 Betrayed by an ambitious father, forcibly betrothed to the handsome yet enigmatic Sir Jon Raemon and soon to be bedded by the covetous King Henry, Virginia D’Arvall is the female pawn in a masculine game of desire, power and lust.

Ginny is determined to keep her honor, but in these dangerous courtly games, she will need to have her wits about her like never before. Will she realize that in Sir Jon she may just have all the love and protection she needs to survive?

Recently I’d been thinking of how long it had been since I read a Tudor era book which lead me to try and recall what I might have in my TBR piles and files to satisfy my era itch. Then Lo and Behold a scan of the current Harlequin Historical offerings yielded this cover and (the slightly cringe worthy title) “Betrayed, Betrothed and Bedded.” Perfect timing. It’s also been a while since I read an arranged marriage plot. This trope usually only works for me in a historical and I like it best without any Fated Mates stuff so the book was a double treat.

First off, I thought it had good period feel. There’s cold, sweat, lots of laces to deal with on the clothing, slow travel, loyal retainers, bulky headdresses, not much mention of bathing unless one was hot and sweaty and travel stained, arranged marriages and a lusty king. It’s also a sad view of childhood and the way most parents would view small children as better off barely seen and not worth much interest. Of course the way parents manipulated and ordered even adult children around is hard to imagine these days. Marriages are power and dynastic unions in which love has little part.

Intrigues are front and center and the flavor of every day with the Howard family angling for power again while the nasty Thomas Culpeper tries to shove Ginny under the King’s nose in place of the woman he loves? lusts after? However half of Ginny’s family won’t win any awards for the way they tried to slide into favors based on the King’s plan to turn her into his mistress once she was safely married. The way the other half attempts to shield her from the King’s bed lead to some chilling scenes of frightfully close calls and fears for their ultimate safety.

The descriptions of life at court have a “you are there” vibe which allows us to see how the vapid sycophants who surrounded the king were at his beck and call while they schemed and plotted. It seems that court life was an endless round of courtiers attempting to fill their days and amuse the King. I also enjoyed the sympathetic view of Anna of Cleves and have always wondered if she ever realized how lucky she was not to have caught Henry’s interest. To me, this stuff was the true strength of the novel.

The romance and relationship of Jon and Ginny felt weaker. When they first meet, Ginny feels she’s fallen in love at first sight. Later thoughts of Jon lead me to believe he felt the same way. A socially advantageous marriage Jon enters instead then causes Ginny much heartache before his wife dies in childbirth. Then she becomes snubs him at court before their marriage is arranged. Ginny then weathervanes about how she feels for Jon. It’s almost “in this chapter I’m supposed to hate him” followed by “oh, now I love him.” But she is a young woman with little experience in men or falling in love so I suppose it makes sense even if it does get annoying trying to keep track of which way she feels today.

I also got tired of the “Big, Dark Secret that Jon can’t possibly tell her until he feels she trusts him” hanging over the story. When it’s revealed, it does make sense why he would wait to tell her something that could be used against him – after all she is young and not as adept at hiding her feelings from other courtiers. And the dark politics swirling around court wouldn’t lead to easily trusting when tomorrow you could lose your head. Still the fact that we come so close to the truth yet no one fills Ginny in on Jon’s first wife felt a bit of a tease after a while.

My final grade is a bit of this crossed with a little of that. The romance is frustrating as it seems to circle back around over old ground a few times before finally getting home. But the behind the scenes view of a spoiled King to whom one did not say no and how events and lives could turn on a penny and said King’s whim was truly frightening. B-